Analytical Review Of Colts At Ravens 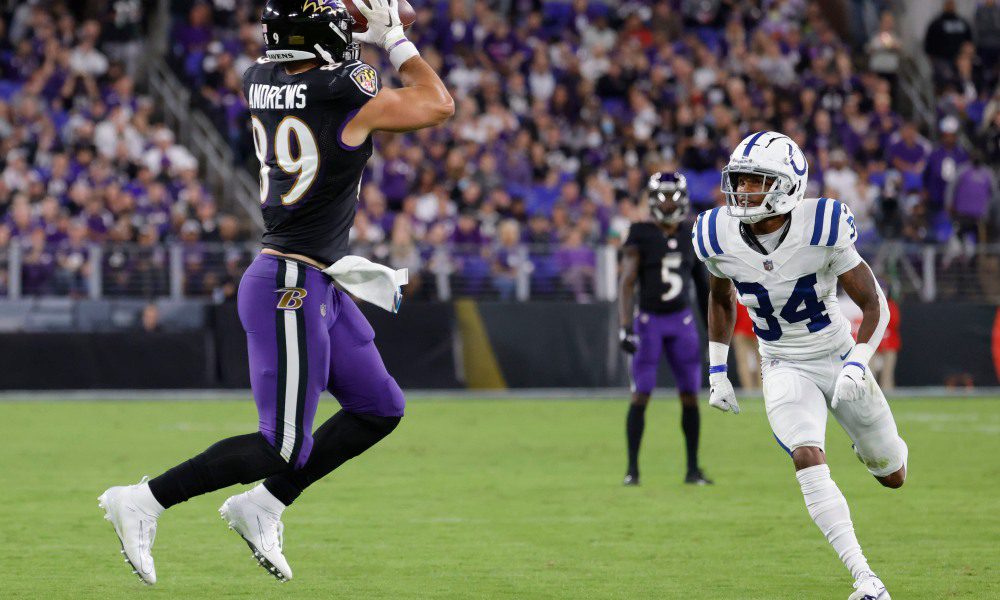 The Baltimore Ravens have now played five regular season games, four of those five games have been absolute nail-biters. The Ravens’ only “boring” win was last week’s 23-7 blowout of the Denver Broncos. The other four have taken years off my life as well as many other Ravens fans. The Colts and The Ravens did battle on Monday Night Football this week which saw The Ravens win on a walk-off touchdown courtesy of a Lamar Jackson touchdown pass to Hollywood Brown. The Ravens never held a lead in this game but came out on top 31-25. A truly amazing performance by the Ravens, particularly on offense. They racked up 523 yards of total offense and Lamar had a career high in passing yards with 442. There is a lot of good to take away from a game like this but there were also some bad which leads me into this week’s 3 highest graded/3 lowest graded players of the week courtesy of Pro Football Focus (PFF).

Mark Andrews comes in as this week’s highest graded player with a PFF grade of 93.2. Andrews was simply unstoppable, he had 11 receptions for 147 yards and 2 touchdowns. He also added in two 2-point conversion receptions that proved crucial in the team’s comeback effort. Andrews had an absurd 3.59 yards per route run which lets you know he was as efficient as possible when going out for a pass. On top of all that, Lamar had a 153.4 passer rating when targeting Andrews. The former Sooner is now the highest graded Tight End in the NFL. He now has 4 straight games above an 80 overall PFF grade and continues to show everyone he was worth every penny of the 56-million-dollar contract he signed before week one. Andrews will see the LA Chargers next, who just allowed 42 points to the Browns and 149 yards to David Njoku. Andrews is as elite as it gets at the tight end position and will most likely be relied upon once again.

Lamar Jackson makes the highest graded list once again with a PFF grade of 82.7. Just an absolutely surgical performance by the former MVP. Lamar continues to prove his doubters wrong again and again. He had a PFF passing grade of 90.7, and was in complete control in the second half. Lamar was 29/32 for 335 passing yards in the second half/OT. He finished with an 86% completion percentage, but had an adjusted completion percentage of 90.5. More importantly, he didn’t have a single turnover worthy play on 43 attempts. That makes two games in a row in which his decision making was perfect. He attempted 3 total passes of 20+ air yards, all 3 were completed including the long TD pass to Brown which started the comeback effort, he missed Brown early in the game for what looked to be an easy touchdown pass but the throw was low. If he hits that pass, his night would’ve been even bigger. But nevertheless, he dominated the game and willed his team to victory. He is now PFF’s 6th highest graded QB this season and will look to continue the dominance next week at home against the red hot LA Chargers.

Mekari finished the game with a PFF grade of 79.7, which was good for being the third highest graded player of the week. An unsung hero of the makeshift offensive line, Mekari has been good so far but this was his best game of the year. He was a good pass blocker with a grade of 78.7, only allowed 2 pressures on the night. But he shined as a run blocker with a grade of 87.7. The Ravens did not run a lot, but when they did, Mekari was consistently beating his guy off the line, unfortunately the rest of the offensive line did not create much room for the running game to be a factor in this game. But it is encouraging to see the former undrafted center play well at right tackle. He is an invaluable piece to this team since Stanley has been sidelined and Villanueva having to fill the hole at Left Tackle.

Patrick Queen was the lowest graded Raven once again this week, registering a PFF grade of 27.3. Queen has now been the lowest graded Raven four weeks in a row. He is now PFF’s lowest graded linebacker out of 84 qualifiers. It’s more of the same with Queen, missed tackles. He only had one on the night but that puts his total missed tackles up to ten for the year, most in the NFL. Queen had one impressive tackle for a loss but that was about the only time he’s made an impactful play since his week one sack against Derek Carr. He was targeted twice and allowed both of the targets to be caught for only 18 yards. The Colts’ running game was doing whatever they wanted the whole night, constantly gashing the ravens inside and out, you would expect a first round linebacker to be a bit more active but it just hasn’t happened yet for Queen. It doesn’t get any easier for Queen as Austin Ekeler comes into town next week who is maybe the best receiving running back in the NFL.

Averett comes in as the second lowest graded player of the week with a PFF grade of 27.9. It’s safe to assume that most Ravens’ fans saw this one coming. Averett was targeted 11 times for 9 catches that resulted in a whopping 184 yards. All 9 catches resulted in first downs and he also allowed one touchdown. Coming into this game, Averett has played well, allowing 167 total yards through the first 4 games. But the Colts were picking on him the whole night, it felt like every time they threw it, it was at Averett. He’s played admirably this season considering he wasn’t in line to start because of the Marcus Peters injury. Averett will need to quickly forget this performance as the Chargers who just hung 47 on the Browns, come into town.

Malik Harrison comes in as the third lowest graded player this week with a PFF grade of 29.8. Harrison once again makes the lowest graded player list. Harrison has graded mostly poorly this year with the exception of last week in which he saw an 89 grade; highest of his career. Against the colts, he started but only played a total of 18 snaps, Chris board replaced him and graded higher. Harrison missed 2 tackles on the night while only registering one tackle, not something the coaching staff likes to see. He was also targeted twice and only allowed one reception, but that reception went for 21 yards. The Ravens have a problem at inside linebacker and you wonder if the team will address it via free agency or possibly a trade. I still have faith in both Queen and Harrison mainly because they are both young and still adjusting to the speed of the NFL. But adding a veteran surely would not hurt.

The biggest takeaway from this game is Jackson’s performance. He faced a 19 point deficit and overcame it throwing the football with precision. One thing you love about Lamar is his mindset, it might be cliché to say but he is all about winning. When he has a presser, reporters will try to ask him insightful questions and he will always just talk about how important winning is. He also always talks about how much he believes in his offensive line and receivers. Lamar is still a young player and likes to have fun off the field but he is as serious as it gets in terms of being a competitor. You can tell how much he dislikes losing and as fans we should appreciate that. Lamar and the Ravens will host the Chargers next week which could have huge playoff implications down the road. Also, next week is when Rashod Bateman should make his debut, which is crucial considering Sammy Watkins has a hamstring injury.