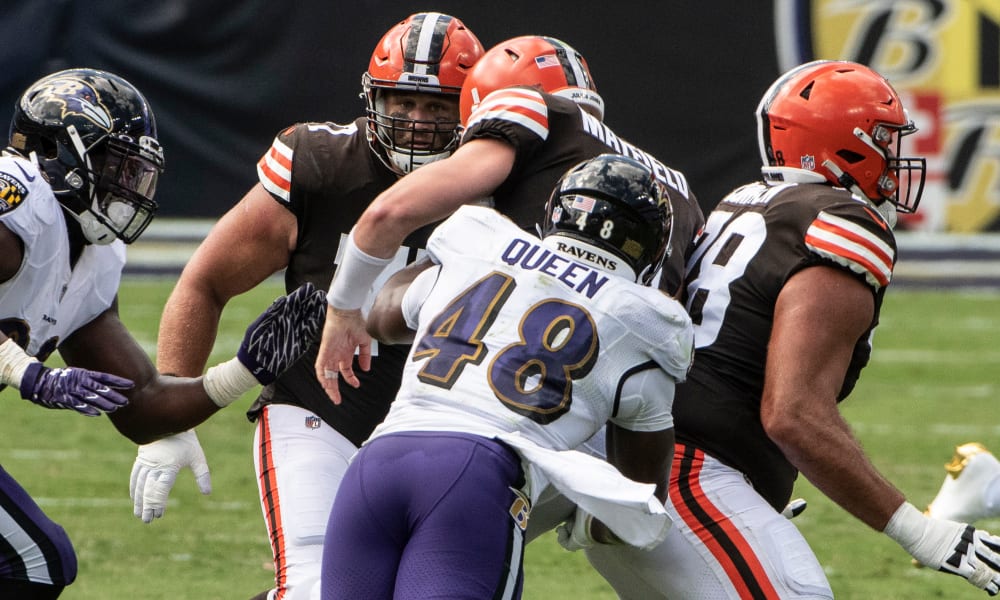 This week I dove a bit deeper into the Ravens defense as a follow-up to the game. There wasn’t a whole lot not to like about the final results of the Ravens overall.

I thought the Ravens were creative as usual and Wink brought his A-Game in terms of various packages and looks to try and confuse Mayfield. The Browns did their best to be ready for this, they kept many guys back to help with the blitz, often having 6+ guys blocking and reducing their routes. This play fascinated me, for how teams might approach Baltimore the next few games.

The Browns put two guys into routes, who are covered up Peters and Humphrey. No surprise here, there isn’t pressure, the Ravens rush 6 but there are 7 guys to block, that’s hard with or without deception. But do teams really think trying to attack Peters and Humprhey in man to man is the best way to beat them?

This tells me the Ravens are going to be able to run up the score against inferior QBs. Teams are either going to have to cut down routes or let their QBs face the music. That being said, there are a lot of veteran QBs who will likely be able to recognize the blitz and get the ball out this year, so I think how teams handle the Ravens deception is something to watch.

The Ravens also had some miscommunication issues. That’s to be expected. The 29-yard run here is a good example, there is a huge cut back lane, but that has more to do with Cambpell being off the play here, rather than set. I think things like this work themselves out.

A few other quick hitters that I noticed that I thought were worth pointing out.

Patrick Queen looks like the best blitzing ILB the Ravens have had for some time. Mosley was smart, but Queen looks smart and Quick. On his sack, he does a great job lining up showing blitz between McPhee and Wolfe, but he comes back around Wolfe for the sack here. And in just two steps, Queen makes the right call on the gap and fires it and gets between the C and the G. What impresses me on this play is not that Queen makes the play, it’s that Bitonio releases Wolfe, has a yard of space to stop Queen and Queen still beats Bitonio to the hold, without Wolfe needed any extra curricular activity to slow down Bitonio. I think Queen is going to be a potent part of the pass rush for Baltimore and give a level of deception to the pass rush that Wink hasn’t had the last few years.

I also thought Broderick Washington and Brandon Williams figured it out in the second half. The first half had a lot of 5 v 5 rush looks. They both were either moving guys backwards or tacking blockers totally out of the play. I really liked what I saw from a few snaps of Washington and Ellis together, too. He looks like he could be a valuable run stopping guy for the Ravens.

The ILB situation looks vastly improved this year as well. LJ Fort was everywhere doing everything this week. And Malik Harrison looked good in space, and I thought quick to go with his big quick hitting body this week. That’s a good sign for Baltimore.

And it’s hard to argue with the results from Elliott (the hardest hitter award), J. Smith, and Clark in the secondary. The All-22 hasn’t been released yet, so I’ll check back on the forum once we’re able to look at coverage and see if Mayfield was missing guys or if those guys really did help shut down the back end. In terms of defending throws, Young, Peters, and Humphrey all looked very good though, and I’m guessing that play also lasted for the duration of the game as wel.

Lastly, Judon and Bowser, I thought played very well. Judon had tremendous bend on his roughing the passer play and had a great instinct to loop inside on the Mayfield 4 yard scramble. Bowser showed up in all facets of the game and his motor is going to be a good fit for this secondary.

I thought the defense played above expectation at first, due to Mayfield being so bad, but rewatching the game film, I think there is a lot to like about what the Ravens did on defense. We already knew this, but if this defense gets locked in, look out, this team could threaten to be a regular season behemoth in terms of metrics like DVOA again in 2020.