Another Maryland-UConn Thriller; Alabama Next 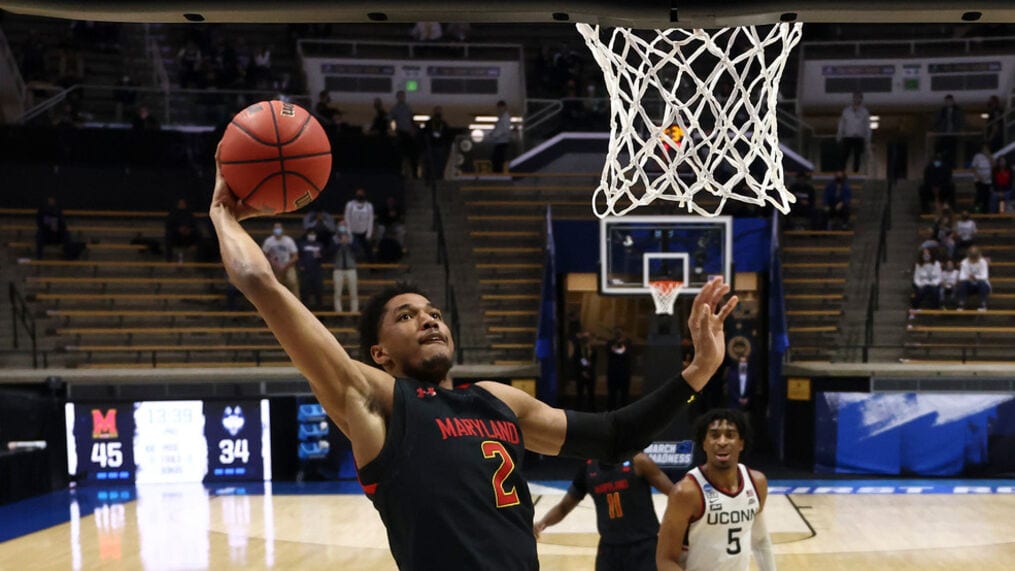 It has almost been 19 years to the day since the March 24, 2002 Elite 8 thriller between Maryland and UConn in which Maryland won 90-82 at the Carrier Dome in Syracuse, NY. Saturday’s night game while not nearly as high scoring (MD 63-UConn 54) was a tough, gritty defensive battle as we expected it to be. The Terps buffered themselves nicely with an 11-point lead at halftime 33-22 and would come away with the victory only after UConn cut it down to 53-48 with 2:53 in the game. The Huskies’ James Bouknight who made the shot to cut the Terps lead to 5 would miss his ‘And 1 Free Throw’, a huge play late in the game and the Terps would preserve and increase the lead on the way to victory.

Here is what I wrote on social media after the game:

I love great defense in basketball…MD had better resume coming in…That was a hard-fought win with grit and toughness that Williams and Turgeon teams have always had…tough team to beat when Ayala, Wiggins and Scott are on…Alabama is much different team offensively, but they don’t play D like UConn and they have not faced this kind of defense often.

The win came down to Maryland’s excellent pack in defense holding UConn’s Bouknight at bay and keeping down UConn’s shooting. Maryland’s position less line up with 5 guys out made it problematic for the UConn defense. Eric Ayala could not be guarded by any of their guards. Maryland shot from 3 much better than their season average shooting 9 of 18 led by Aaron Wiggins going 4-6 and that helped immensely. They did all this getting 1 point and 1 rebound from their bench.

Here are the notes I wrote down as the game was going on in real time for my radio show Sunday afternoon on 105-7 The Fan:

-MD playing a pack like defense with active hands

-MD offense needs to realize how tight UConn’s defense is, I think playing a little too loose or lax with the ball offensively, has to be stronger with the ball

-MD with 10 points off TOs at one point

-great 3-point shooting in the 1st half by Terps, esp. Wiggins

-UConn’s star Bouknight’s first FT did not come until 11:36 in the second half

-Gaffney’s miss from 3 around 4:41 was huge would have cut lead to 4 after Tyler Polley had made a 3 and Gaffney a layup prior to Polley and Huskies were gaining momentum

-bad foul call on Wiggins on Bouknight, should have been offensive foul if anything but he misses first of 1 and 1 at 2:29, huge miss, would have cut lead to 5 if he makes both

-Scott FTs with :43 sealing it

Sometimes playing a team that is similar can be good and sometimes bad. Despite the issues on the offensive boards and UConn’s tough D, MD used their advantages effectively to come away with the win. It is a real good start for the Terps who come in with a lot of confidence against #2 Alabama Monday night at 8:45pm on TNT-TV and on the radio on 105-7 The Fan-Baltimore. A win over Alabama and then they are playing with house money. But more importantly with Abilene Christian’s upset of #3 Texas, if the Terps can get to the Sweet 16 the chances of them getting to the Elite 8 are very real. Maryland is capable of beating either #11 UCLA or #14 Abilene Christian, but it will take another big effort against Alabama. But the Terps are used to that night in and night out in the Big Ten.

Alabama is a run and gun team who shoots the 3 at a high rate and shoots it well. Maryland cannot get into a high offensive scoring game with them and will need to control the pace. It will be another tough match-up, Alabama will need to shoot from 3 better than they did against Iona because it is not likely they will be able to shoot at a 47% clip against the Terps half-court defense. Maryland has faced all different kinds of offenses this season and outside of Michigan has held their own nicely. The Crimson Tide is an exceptionally good team but 3 of their 5 losses were to ranked opponents and the other two to Clemson who was bounced in the First Round by Rutgers and Stanford who did not make the tournament. They have wins over then #7 Tennessee who was bounced in the first round of tourney and two wins over now #5 seeded in the Tourney LSU who was not ranked at the time. The Tigers play Michigan Monday in the Round of 32. The Terps have played a tougher schedule in my opinion and their ranked wins are on par with Alabama’s. A win over Alabama would go a long way in helping Mark Turgeon start to build a better postseason resume in College Park. Go Terps!