Well, the Orioles made some more changes this past week to their 40 man roster, so we are in for another posting of Arrivals and Departures.  If you want a quick primer, you will find it here.  If you have any further questions, feel free to email me at [email protected].

April 10, 2013 – Orioles acquired LHP Chris Jones from the Braves in exchange for RHP Luis Ayala.  Jones was assigned to AA Bowie.  This opened a slot on the Orioles’ 40 man roster

April 12, 2013 – Orioles claimed RHP Alex Burnett off waivers from the Blue Jays.  A slot on the 40 man roster was opened by transferring UTL Wilson Betemit from the 15 day DL to the 60 day DL.  Burnett was then optioned to AAA Norfolk.

First and foremost, this move was not about acquiring Chris Jones.  It was about removing Luis Ayala from the Orioles bullpen.  The Orioles have noted that they desire to hold onto Rule 5 selection T.J. McFarland.  It should be noted that there are good reasons to think that Luis Ayala is more useful than McFarland.  McFarland shows an extreme split with a SIERA of 2.82 against lefties and 4.32 against righties in the minors over these past two years.  At the MLB level, Ayala is split 4.09 and 4.14 against lefties and righties, respectively.  As the seventh man in the pen, Ayala simply is going to be more effective against lineups by providing league average pitching against both sides.  The argument for McFarland is that he can be a sufficient garbage time pitcher as the 7th man out of the bullpen because being below average against righties does not matter when you are down 8 runs in the 6th inning.  Plus, he can also be brought in to face lefties for a batter or two and likely be above average.  In other words, it was a leverage selection.  Ayala is probably not a good solution to have in a tight game whereas McFarland might have some usefulness there in addition to taking care of blowouts.  Additionally, the Orioles save approximately $961, 538.46 by dealing Ayala.

But what about Chris Jones?  Chris Jones was selected in the 2007 draft by the Indians in the 15th round.  He was offered 350k to bypass college, which he was quite pleased to do.  Earlier that season he had suffered a broken hand and was not incredibly impressive that Spring.  However, the Indians saw growth potential in his fastball and flashes of an advanced changeup.  As the years ticked by, the fastball did not improve in terms of velocity and shows below average velocity (high 80s), but he does control and command it well.  The changeup also did not advance, providing him no swing and miss pitch against right handers.  He does have a average to below average curve that is quite effective against left handers in the low to mid minors.  It is a pitch that he can get bats out on when it drops outside of the strike zone.  The greater concern is that more advanced hitters will simply lay off the pitch.

Anyway, after spending two years in the Indians low minors providing bullpen innings, the Braves acquired Jones from the Indians in exchange for RHP Derek Lowe and 10 MM.  They placed him in their AA bullpen in Mississippi where he provided league average relief with peripherals that suggested his performance was actually above average.  Now with the Orioles, he was assigned to AA Bowie replacing Tim Bascom who was reassigned to shortseason A ball Aberdeen (Bascom was being transitioned into a relief pitcher this year).  Jones is more or less an organizational player at this point and will provide more southpaw balance in the pen.  There is little reason beyond that to expect much of him.

Chris Dickerson gives the Orioles a defender who can adequately back up Adam Jones or Nick Markakis.  Nate McLouth really is not a great solution in center where he is a well below average defender.  Nolan Reimold could be adequate in right field, but defense is not exactly a strong suit for him.  Dickerson provides an elite glove with some measure of offense.

So how is this plus defender with decent minor league lines a minor league free agent?  Offense.  He was originally selected by the Reds in the 16th round of the 2003 draft.  His athleticism was off the charts, but he never showed any aptitude for hitting in college.  Simply put, he was a pure defensive player with athleticism the organization hoped could be turned into competent baseball skills.  In 2008, after mediocre performances and a litany of injuries, he broke out in AAA.  He simply began hitting everything and slashed 287/384/479.  Promoted to the Majors, he continued to hit and slashed 304/413/608.  Yes, he did not fair as well against southpaws, but when the platoon split is a 131 wOBA+ against a 173 wOBA+…nobody complains.  In 2009, he provided league average performance in center and then injured his knee.  Since then, he has never righted himself.

As such, he profiles as an excellent fourth outfielder.  He once showed promise of being a regular and teams like to see if they can rediscover that.  The Brewers tried when they traded Jim Edmonds for him in 2010.  The Yankees tried when they dealt Sergio Mitre for him in 2011 (you can see how much further his stock fell in that year).  This past season, the Yankees simply let him go.  Maybe Dickerson can be 2013’s Nate McLouth.  Probably not, but it certainly would be nice.

Alex Burnett owns a low 90s two seam fastball (a pitch he began throwing more frequently over his four seamer these past two years), a mid 80s slider, and a high 70s curve.  None of them are particularly impressive pitches and the inability to develop a change up makes it difficult for him to face left handed batters (.262 wOBA against righties and a .308 wOBA against lefties in 2012).  The switch from relying on the four seamer was necessary.  Even though he could work more strike out with it by going high and sometimes hitting 95, it was a pitch that often could be taken deep.  By living with the two seamer, he induces more groundballs in exchange for strikeouts.  The problem is that he simply does not own any swing and miss pitches.  A lot of balls are put in play, which can lead to a lot of trouble.

That, the trouble, did not happen last season, but his peripherals suggest that it was simply happenstance and not indicative of any newly developed abilities.  Although he sports a 3.52 ERA, SIERA says it should have been a 4.92.  The Twins concurred and designated Burnett for assignment where he past through some of the AL and the Blue Jays claimed him.  A short time later, the Blue Jays designated him for assignment and he then pass through most of the AL unclaimed until his number reached the Orioles.  Shifting Betemit to the 60 day DL opened a slot on the 40 man roster where Burnett was placed.  He was then optioned to Norfolk where he will provide some quality depth in the bullpen. 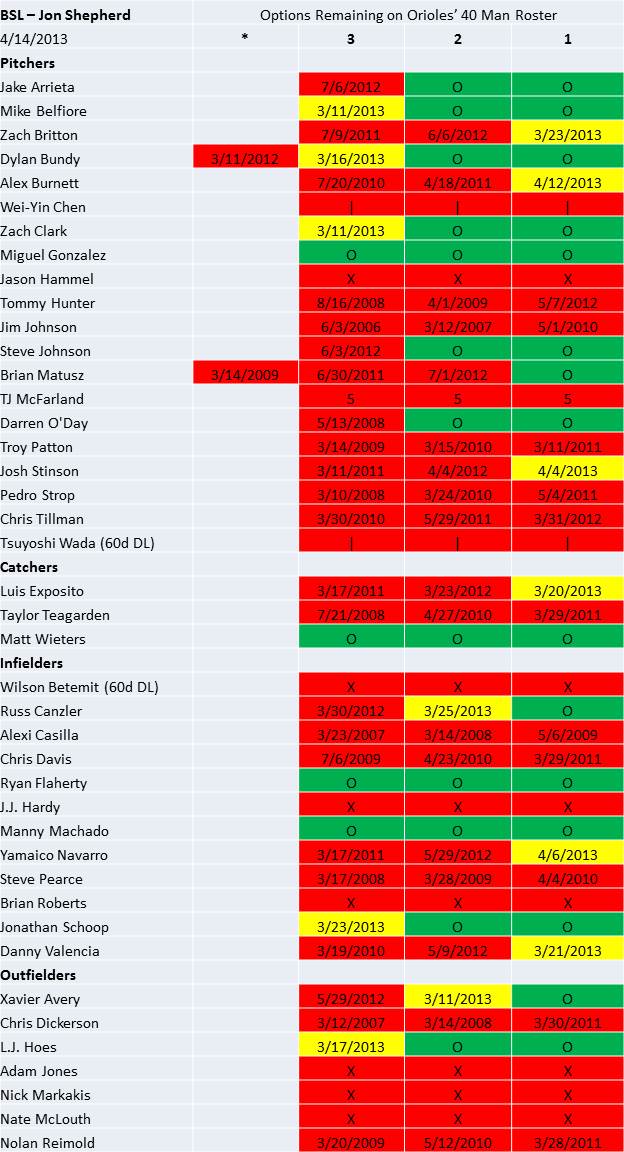 Jon Shepherd founded the Baltimore Orioles blog Camden Depot in 2007. In addition to Baltimore Orioles analysis, the blog also focuses on qualitative and quantitative approaches to assessing baseball in general as well as providing mainstream reviews and commentary on substances alleged to performance enhancing. Dr. Shepherd’s writing has been featured on ESPN, and his blog has been part of the ESPN Sweetspot Network since May 2011. He has made radio and podcast appearances for Orioles’ centered programs.