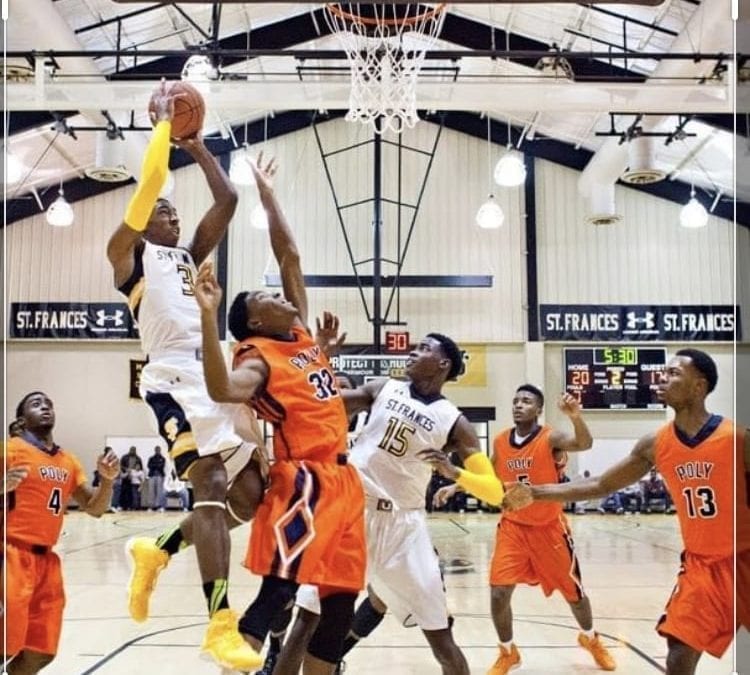 The 2019-2020 Baltimore area basketball season features a pair of teams ranked among the top 50 in America, including defending MIAA and BCL champion St Frances, and the Poly Engineers, who became the first team in MPSSAA history last year to win three straight state championships in the 3A classification. What this season also brings is a boatload of transfers, both in and out of the MPSSAA, as well as in and around.

The Panthers of St Frances missed out on the ‘golden’ trifecta last season, winning the MIAA title, the BCL title, and the Alhambra Catholic Invitational title, in part of having lost their star player, junior ‘Ace’ Baldwin, due to an injury suffered in the BCL championship win over St Maria Goretti, where Baldwin hit a game-winning buzzer-beater to give the Panthers a 71-68 win. Baldwin is back to lead the Panthers, who are the favorites to defend their MIAA and BCL titles, and will strive to become the first Baltimore area team to win the prestigious ACIT in 38 years, since Calvert Hall won the tournament in 1982.

The Engineers of Poly became just the fourth school, and sixth team, to capture a 3-peat in the MPSSAA since 1971, joining Dunbar (‘93-96, ‘03-06, ‘10-13), Randallstown (‘05-07), and Springbrook (‘08-10). The ‘18-19 Engineers boasted wins over nationally ranked St Johns DC and St Frances, and return four starters from that team, including Marquette commit, Justin Lewis. If the Engineers capture another state title this season, as they are favored to do, they would become the first school in MPSSAA history to win four consecutive state titles in either of the two largest classifications, and just the second overall in 49 years, joining Dunbar, who has achieved the feat three times.

Those are the nationally ranked pair hailing from ‘Charm City, here’s a look at the top teams in all of the leagues in the Greater Baltimore area.

St Frances (9-0) moved to #22 in the Max Preps rankings this week, following the Panthers win over Chicago power Simeon, 61-57, last week in the ‘Windy City’. The Panthers return their three top scorers from their 37-7 team a year ago, including their leading scorer Baldwin (14.1, 5.6 ast, 69 3’s), 6’7 senior Jamal West (12.9, 7.4 reb), and 6’3 LSU football commit, Jordan Toles (11.7). 6’9 junior Julian Reese, a New Town transfer, teams with West to give the Panthers a formidable frontcourt. Junior guard Khyrie Staten adds scoring, displayed with his 20 points in the win over Simeon last week. 6’3 senior Jahmal Banks and Annapolis junior transfer Byron Ireland, who led his Panthers in scoring last year, bolster the Panthers lineup.

The Panthers faced a gauntlet of a schedule last year, and will see another this season. St Frances notched wins over two of Chicago’s best, Simeon and Whitney Young, DCIAA champ Wilson, Memphis East, St Benedict’s NJ, and Gonzaga last year, with losses coming to Paul VI, Poly, DeMatha, and Mt St Joe twice, before knocking off the Gaels in the MIAA title game. Next weekend, the Panthers face the #8 Sunrise Christian Academy KS Buffaloes, who are coming off a pair of wins over DeMatha and Gonzaga in the National High School Hoops Festival. The Panthers also face Imhotep PA and #5 IMG, in the Ascender Classic in January, then a rematch with Poly in late January, following the Engineers come-from-behind 59-58 win this past January. Coach Nick Myles, in his ninth season at St Frances, has a career record of 207-72.

The #1 contender spot to the Panthers is wide open, as the three Baltimore league members expected to vie for the spot – Mt St Joe, Glenelg Country, and McDonogh, have all taken early lumps. The Gaels of Mt St Joe (5-2) lost to McDonogh, 80-67, on Monday, after the Eagles (4-4) took losses to St Paul’s and Franklin, and survived Mt Carmel by a point. Glenelg Country (2-3) suffered a loss to Loyola, as well as Rock Creek Christian, before losing to the Gaels last night, 62-48. Gaels Coach Pat Clatchey (29th season, 683 wins) has a chance to win his 700th game in his 29th season in Irvington.

Gilman (4-2) could be in the mix, with talented sophomore Christian Winbourne, 6’1 Jordan Foster, 6’9 senior Roman Hinds, and 6’5 junior Malik Missouri, leading the way. The Greyhounds started this season with close wins over Spalding and Boys Latin, and a 1-point loss to Mervo, before falling to Mt Carmel, 65-57, Wednesday night. Spalding (3-2) has won three straight games since a 3 point loss to Gilman, and a blowout loss to Archbishop Carroll, including a 72-62 win over McDonogh on Wednesday. The Cavaliers are led by senior Josh Akers, and sophomores CJ Scott (6’4), Cameron Whitmore (6’4), and Tyheil Peterson.

John Carroll has raced out to a 4-0 record, following a 5-25 season, and are led by junior guard Jalen Bryant (‘19 12.3 ppg) and sophomore guard Tyson Commander (‘19 14.9 ppg), the Patriots top two scorers from a year ago. Six of the ten Patriots in their regular rotation are freshmen and sophomores. Pallotti (2-3), led by Gonzaga transfer and Loyola commit Wade Jackson and Anthony Blunt, have a 4 point loss to Mt St Joe, and a 2 point loss to Spalding. Loyola (4-2) is led by 6’7 senior power forward Mitchell Fisher. Boys Latin (1-3) will look to rebuild following a 27-6 season, while Calvert Hall (3-4), who has gone 46-59 since a 30-7 season in ‘14-15, looks destined to finish with their fourth straight losing season.

The Baltimore City league has dominated the MPSSAA since joining in ‘92-93, winning 43 state titles, winning at least one in 22 of the 27 years since becoming a member of the ‘Association’. Last season, the city league won three state titles in the same season for the fourth time (‘09, ‘12, ‘18, ‘19) in 11 seasons, and second time in as many seasons. Poly is 55-4 versus MPSSAA competition over the last 3-plus seasons, Lake Clifton has won back-to-back state titles, Patterson has captured two state championships in three seasons, and Edmondson is coming off a year where all four of the Red Storm’s losses came to state champions – Patterson (3) and Poly.

Coach Herman Harried (23rd season, 445-128) returns for his 23rd season at Lake Clifton (1-0), as the Lakers look to defend their 1A state title, and win their third straight (‘18 2A champs) straight state championship, overall. The Lakers have won four state titles in 11 years, and only Dunbar has won more than Lake’s six since joining the MPSSAA in ‘92. Michael Gray headlines the Lakers roster, along with senior Patterson transfer Zach Blackwell. Both Gray and Blackwell were Second Team All-Met selections a year ago, with former averaging 16 points, 6 rebounds, and 6 assists per game. Seniors Kywon McCray (6’4), 6’1 senior Joppatowne  transfer Jalen Morris (‘19 16.3 ppg), and 6’2 junior Dreshawn Hodges add to the Lakers firepower.

Coach Darnell Dantzler’s (13th season, 222-60) Edmondson Red Storm have advanced to three Final 4’s in the last 7 years, winning back-to-back state titles in ‘13 and ‘14. Last year’s Red Storm beat New Town in the sectional final, before losing to eventual 2A state champion Patterson in the regional final. This year’s Red Storm has started out at 3-0, including a 58-55 win over New Town. Eontae Nelson, who scored 19 points in his first career start as a sophomore in last year’s sectional final win over the Titans, leads the Red Storm, along with seniors Treshawn Lewis, Daniel Frink, and Tavon Hartz.

Mervo and City College look to be in the city league mix, with the right ingredients to replace Patterson and Dunbar among the top 5 in the city league. The Mustangs (2-1) figured to be promising last year, before losing their best player, 6’4 Will Thomas, to a season-ending foot injury before the season even began. Thomas returns this season, and has a talented cast around him, including scorer Demonee Carter, 6’9 senior center Elijah Rantin, a pair of transfers in senior Teon Rushing (Mt Carmel) and sophomore Carlos Alexander (St Frances), along with Taylor Miller. So far, the Mustangs edged Gilman, 73-72, but fell just short to City, 71-66.

The Black Knights of City College (3-0) gave Poly their biggest scare of the post-season in the opening round of the playoffs last season, losing 65-64, before the Engineers went on to win their third consecutive state title. This year, the Black Knights should be a force throughout the season, with a mix of returnees and a pair of transfers. Dominick Carrington returns for the Knights, as does 6’7 junior Clarence Obiajulu. Despite the loss of Darius Tilghman to Parkville, the Knights have added 6’1 junior guard, Gerstell transfer Ahmad Harrison, who scored 24 points in the win over Mervo, and 6’9 junior Parkville transfer Kevin Kulu. The Black Knights have won three straight to start, following the win over Mervo, with wins over Broadneck and Old Mill.

The defending Baltimore City champion and 2A state champion Patterson Clippers (3-1), who are 45-1 versus MPSSAA completion since early February of 2017, are looking to rebuild, with the losses of 2019 Baltimore Sun POY Marvin Price and Gerard Mungo to graduation, and Zach Blackwell transferring to Lake Clifton. The Clippers return 6’4 senior Joe Jones, and feature two sophomores in 6’3 John Thomas and 6’7 Nuttrell Artis. Keith Booth takes over at his alma Mater, replacing his former teammate Cyrus Jones, while his former teammate Donta Bright takes over the JV. The Poets (2-1), who finished 16-9 last season, will be led by Davion Charles, Rynell Bert, and Juwaun Gibson.