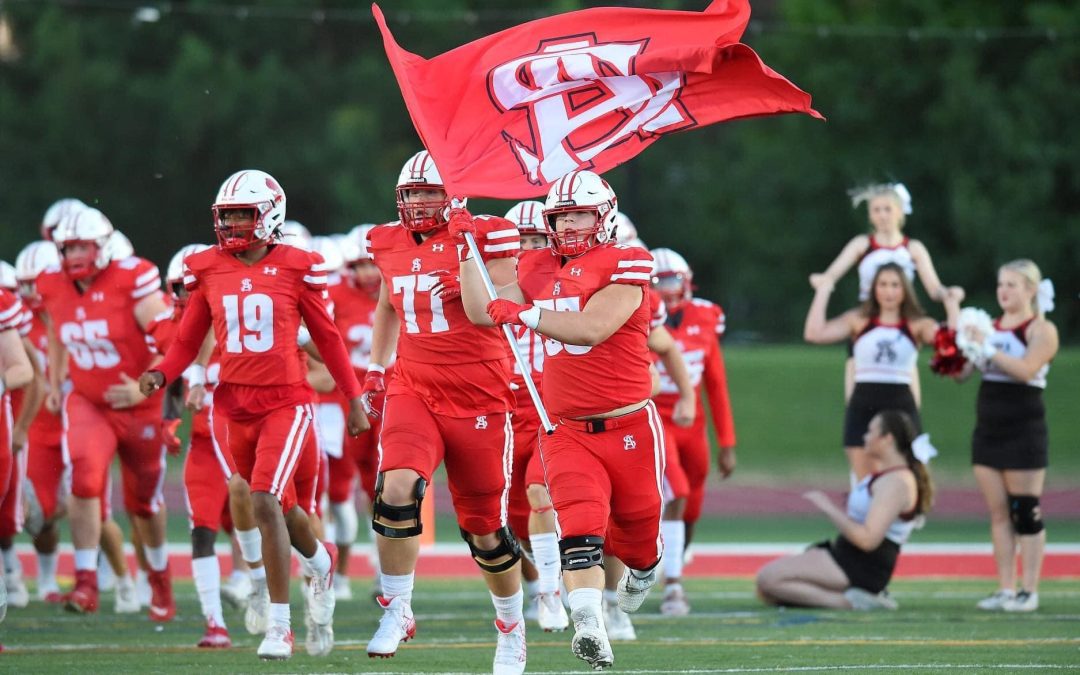 In 2011, the powers that be in the MIAA finally got around to approving a post-season, while allowing Calvert Hall and Loyola to continue to play on ‘Turkey Day’. Instead of this being the MIAA’s 11th post-season, it’s presenting its fifth, after red tape, defections, additions, subtractions, and a pandemic put a pause on the MIAA playoffs. But, it’s back again.

The first MIAA post-season came in 2011, when Biff Poggi and Gilman started to go into full regional power mode, and the Greyhounds took the first two league title games in 2011 and ‘12, handily. The Greyhounds won all four playoff games over those two years by double-digits.

After a four year hiatus, the MIAA post-season returned just in time for the rise of the St Frances dynasty, and the Panthers and Poggi did what Gilman and Poggi once did, dominate. The 2017 Panthers turned the post-season into a laughingstock, pummeling McDonogh, 49-7, in the semifinal, the pasting Gilman, 44-7, in the final. After a year break, and a St Frances departure, the playoffs returned in 2019, with Mt St Joe taking the league championship, topping McDonogh, 17-10, in the final.

Here’s a look at the 2021 MIAA semifinals, as the league celebrates its fifth post-season.

Spalding (10-0) v McDonogh (5-5) – in 2012, Kyle Schmitt left Atholton for Spalding not to coach a team, but build a program. That he has, as the Cavaliers are having a season for the ages. Only once before has Spalding been 10-0, in 2006, when the Cavaliers knocked out every foe in the MIAA B division, a level below the highly regarded A division. The Cavaliers had a program, just not one that could compete in the A year in and year out.

Eight-plus years later, Schmitt has the Cavaliers at the top of the division, dominating the competition. This season, the Cavaliers went 5-0 in league play, with a point differential of +33.4 points per game. No league foe has come within single-digits of the Cavs, but McDonogh has come the closest, losing 14-3, in mid-October. And, that score was misleading, as the Cavaliers squandered numerous opportunities on the Eagles side of the field. The Eagles didn’t advance the chains until after intermission. Cavaliers quarterback Nick Gutierrez ran in for two scores and that’s all they needed.

Outside of league play, the Cavaliers handed 8-1 St Augustine Prep NJ their only loss of the season, knocked off nationally renowned Gonzaga DC in overtime, and topped Pennsylvania private power Malvern Prep by two touchdowns. McDonogh comes into the playoffs at 5-5, with league losses to the Cavaliers, Mt St Joe, and Calvert Hall, and out-of-conference losses to 9-1 LaSalle College PA, and Gonzaga DC. The Eagles fell just short of Mt St Joe, losing 14-11. The Eagles closed their regular season with a 45-6 rout of their rival, Gilman.

In 2019, McDonogh came back to beat Spalding in a MIAA A semifinal, 29-23, after it appeared the Cavaliers would win their first MIAA A post-season game with two minutes to play. Up 23-19, with minutes remaining, the Cavaliers forced the Gaels to punt, which they did, downed at the Cavaliers two yard line. The Cavs followed with a holding call in the end zone, resulting in a safety, and the Gaels receiving a free kick. Shortly thereafter, sophomore Preston Howard found All-Met Curtis Jacobs for the game-winning score with 35.2 seconds to play.

Gutierrez has been the efficient dual threat at quarterback the well balanced Cavaliers have needed this season, throwing for 970 yards and 11 touchdowns, and rushing for 809 yards and 14 touchdowns. Jordan Harris, the Cavaliers star back, has rushed for 1,103 yards and 13 touchdowns, caught 13 passes for 125 yards and a score, and has added 400 kick return yards. Gutierrez top two targets through the air has been Jordan Pennick and junior Max Moss. Defensively, the Cavaliers are led by defensive end Jason Robertson, Maryland commits Kellan Wyatt and Lavain Scruggs, and Virginia Tech commit Mansoor Delane. Robertson leads the Cavaliers with 61 tackles and 46 solo tackles, and also leads the team with seven sacks and 12 tackles for loss, adding a safety, interception, and fumble recovery. Wyatt, a 6’2 220 linebacker, has registered 30 solo tackles, 10 tackles for loss, five sacks, and two forced fumbles. Delane leads the Cavaliers with three interceptions.

Coach Hakeem Sule’s Eagles are a talent laden squad, with a handful of ‘Power 5’ players, including defensive linemen Dani Dennis-Sutton, a four-star Oenn State commit, and Kwan Williams, a 6’1 275 pound Boston College commit. Another defensive lineman, junior Mason Robinson, holds offers from Georgia, Oklahoma, and Oenn State, among others. Howard, who regained the starting quarterback position weeks into the season, is a versatile talent at the position, and a Maryland commit. In front of him is 6’3 300 pound junior interior lineman Antonio Tripp, another Nittany Lion commit.

Coach Schmitt is in his ninth season at Spalding, and boasts a 57-29-1 record with the Cavaliers. Overall, including his four seasons at Atholton, Schmitt offers a 95-38-1 career record. Coach Sule is in his fourth season at McDonogh, his alma mater, and has a 19-12 record with the Eagles. Sule was a junior linebacker at Maryland in 2008, while Schmitt, a former Terrapin himself, was a grad’ assistant.

Mt St Joe (7-3) v Calvert Hall (7-2) – The Gaels are the defending MIAA A champions, topping McDonogh, 17-10, in the 2019 title game. The Gaels finished second in the league in the regular season, thanks to a 24-14 victory over third place Calvert Hall in week 9, a game in which the scoreboard doesn’t reflect the Gaels dominance in the game. The Gaels went up 24-0 after three quarters, before a pair of late touchdowns by the Cardinals.

Turnovers cost Calvert Hall, as the Gaels capitalized on the first, to take a 6-0 lead, then did the same midway through the second quarter to stake a 21-0 lead. Bryce Cox, who scored the Gaels first touchdown on a two yard run, which followed a 34 yard gash, finished with 116 rushing yards on 18 carries. A Wilson Watkins 46 yard connection with Harold Goodridge set up the Gaels second touchdown, then the two got together for the Gaels third score, which followed an interception by the ‘Hall’s’ Noah Brannock, to take a 21-0 lead into intermission.

The Gaels traveled to Ohio in week 2, and suffered a 20-6 loss to Cincinatti’s St Ignatius. Three weeks later, the Gaels blew a 21-0 halftime lead to Good Counsel, after the Falcons scored 29 unanswered points in the second half. The Gaels followed that up with a hard fought 14-11 victory over McDonogh, then, two weeks later, posted the impressive win over the Cardinals. Calvert Hall won their first four games , before suffering a 37-14 loss to Spalding. The Cardinals closed the regular season with a lackluster 14-7 win over Pallotti.

The Gaels shut out Calvert Hall, 35-0, in a 2019 MIAA semifinal, before the Gaels went on to win the MIAA A title. Calvert Hall is the only MIAA A team to advance to all five MPSSAA playoffs, sitting with a 2-4 post-season record. Mt St Joe is 3-1 in post-season play, having won a 2012 quarterfinal game over Spalding, then losing 34-11 to Calvert Hall in their semifinal game.

Watkins has thrown for 1,277 yards for the Gaels, while Goodridge leads the team in receiving yards, with 787. Cox has 471 rushing yards on the season. For the Cards, Brannock has thrown for more than 1,200 yards in nine games, while his top two targets, senior Rahkeem Smith and junior Donovan Lewis have combined for more than 50 receptions and 15 touchdown receptions.

Dom Damico is in his first full season with McDonogh, taking over in 2020 with Rich Holzer’s departure. This is Damico’s 30th season overall as a head coach, with four years at Philly’s Cardinal Dougherty, and twenty-four seasons at McDonogh. Josh Ward, an ‘04 graduate at Calvert Hall, is in his first full season (0-2 in the Spring) at his alma mater, and has an overall record of 25-18, including his three years at Concordia Prep.

Harford Tech’s Kelvin Mendez leads the MPSSAA in rushing yards per game, at 243.7 over six games.

With another win, Franklin coach Anthony Burgos will notch his 150th career win at the school.

City and Poly will meet for the 133rd time, but for the first time in the MPSSAA playoffs. The Knights hold a 64-62-6 edge over the Engineers in the series.