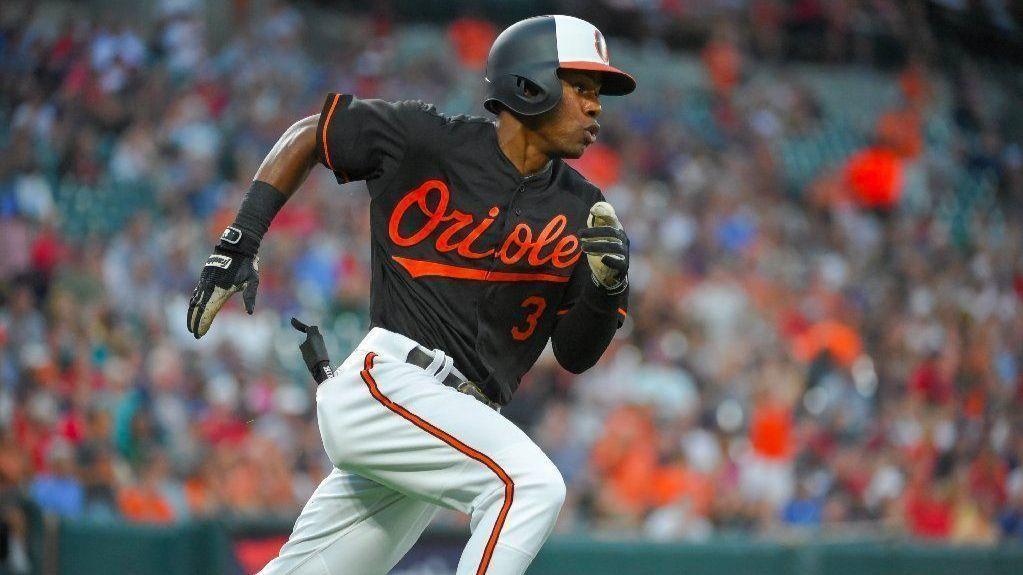 “Real” baseball is finally back for the 2019 season and the Orioles look like they are going to be even worse than they were last year (when most of us thought that they’d be at least “ok”). It’s not going to be pretty, but as BSL’s Chris Stoner wrote yesterday, there are still plenty of reasons to watch. The Baltimore Orioles opening day roster was pretty much set a couple of days ago, and the minor league rosters will soon be finalized as well, before their season starts on April 4 (Norfolk currently has 32 players listed on their roster, with 5 of them being catchers). I’ll probably have some thoughts on minor league roster assignments after those have become final, but for now, let’s take a quick look at the Orioles 40-man roster to start the 2019 season.

Below is a cheat sheet that shows the opening day 40-man roster, how many times that player has been optioned, and when those option dates occurred. If there are any former readers of Camden Depot, this is pretty similar to what Jon Shepherd used to track with respect to the 40-man roster. I think it’s valuable to see where the team has flexibility and who may be at risk of being designated for assignment, should a new acquisition be added to the 40-man roster. 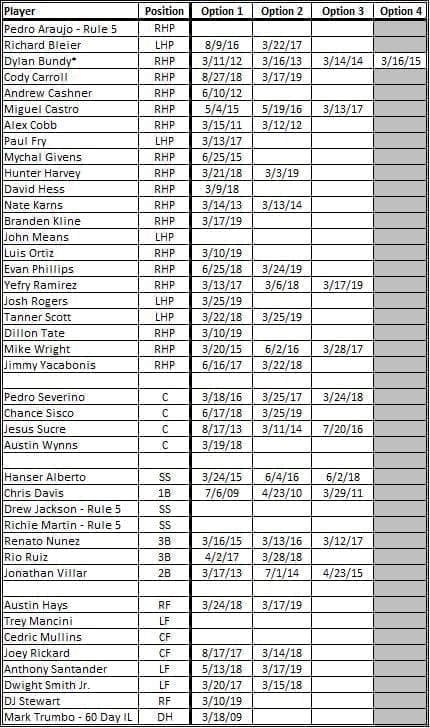 As you’re probably aware, there was some minor controversy around some of the players selected to represent the team on opening day, specifically with respect to Chance Sisco and Austin Hays. I’m not really going to spend much time discussing my thoughts on that, other than to mention that I think there are rational arguments that can be made for either decision. I tend to side with the front office on this one, in that Hays and Sisco specifically have things they need to work on in the minors and should benefit from their time in Norfolk playing every day.

As for the 40-man roster, the first thing that should jump out at you is that the Orioles are carrying 3 Rule 5 selections. In any other situation, this would put serious constraints on a team’s 25-man roster, especially if they’re trying to compete (see the 2018 Orioles…although the Rule 5 selections last year weren’t the reason for the team being terrible). With this team and their goals for 2019, having 3 Rule 5 draft picks shouldn’t be a concern. Plus, Pedro Araujo loses his Rule 5 status a couple of weeks into the 2019 season, and can then be optioned.

While the 40-man roster obviously doesn’t have a ton of talent, there are some interesting names that could boost their stock by the end of the season. There is also a lot of flexibility on the 40-man, as most players have options remaining, especially among the pitchers. Only Dylan Bundy*, Miguel Castro, Yefry Ramirez, and Mike Wright are out of options. Additionally, Alex Cobb and Andrew Cashner cannot be optioned due to accruing more than 5 years of service time.

While the 40-man outfielders also have a lot of flexibility (Mark Trumbo being the only one who cannot be optioned), the roster flexibility in the infield is extremely limited, with two of them being Rule 5 selections and only Rio Ruiz having an option remaining. However, outside of Jonathan Villar, designated any of those players for assignment should not cause much heartache among fans or the front office. Pedro Severino and Jesus Sucre*,  the two catchers to crack the opening day roster are also both out of options, so if (or when) Sisco and/or Austin Wynns get promoted to the 25-man roster, at least one of them will likely need to be designated for assignment. Again, this shouldn’t really cause any heartache.

Hopefully you’ve found this quick primer on the Orioles 2019 opening day 40-man to be helpful. I am planning on updating it from time to time over the course of the season.

*For those interested, some additional information on Dylan Bundy and Jesus Sucre with respect to their options. Bundy was able to be optioned a 4th time due to the fact that his original 3 options were used prior to him accruing 5 years as a professional. He was in a unique position for this to happen because he signed a major league deal when he was drafted, essentially placing him on the 40-man roster his first full year in the Orioles system. As for Jesus Sucre, he has had an option used in 2015, but spent less than 20 days in the minor leagues, which essentially meant that option ended up not counting.