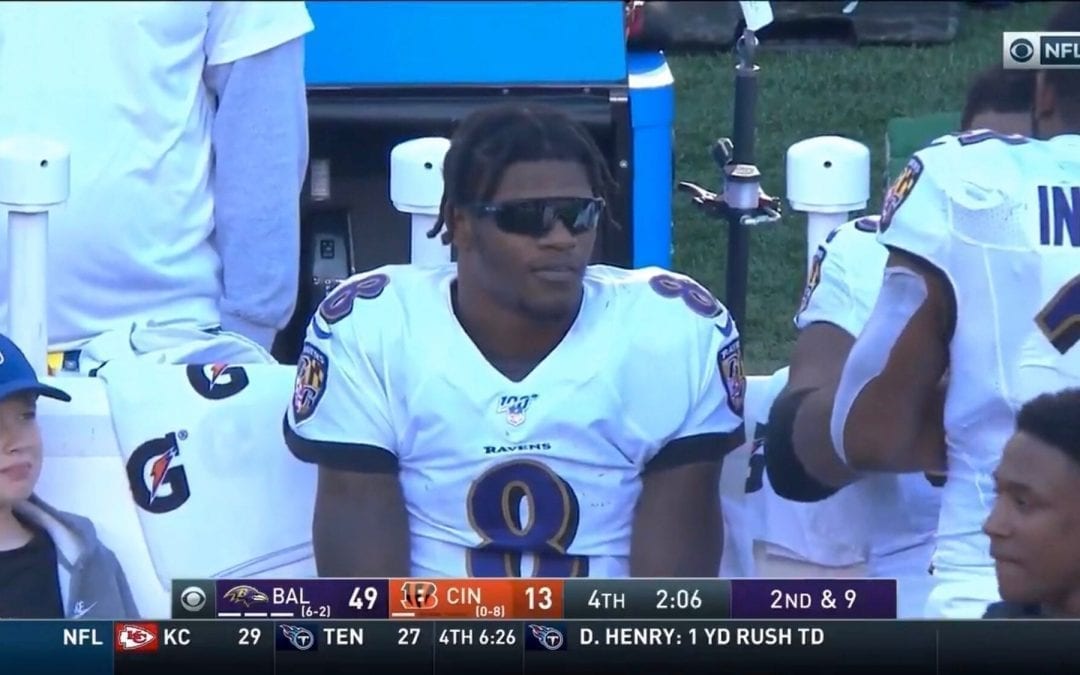 What can you say about the Ravens 2019 season that hasn’t been said already? Not much. The records are noted. The offense, revolutionary as promised. 14-2. First time as the number one seed. League MVP is a lock for Lamar Jackson. The only debate to be had is “who would you rather play in two weeks?”

As we are about to turn the calendar ahead to 2020, let’s look back at some of the magical moments the Ravens had along the way with my top-10 plays of the year. Feel free to chime in on the message board with yours. Did I miss anything? Don’t care for the order? Let’s hear it. We have a week off to reminisce.

Way back in week 1 in the Miami sunshine. The Ravens put up 59 points on a defense that would eventually beat the Patriots, in New England, in a must win game for the Pats! The Ravens started things off in 2019 with a Mark Ingram handoff that went 49 yards and included a forearm shiver to Dolphins safety Eric Rowe. “Good Morning Football” on NFL Network made this carry by Mark Ingram their Week 1 “Angry Run” winner.

Peters had just a couple days to prepare for the week 7 matchup in Seattle. A familiar setting having played in the NFC West with the Rams. He made a fantastic first impression with the Ravens taking a second quarter pass the other way. A pick-six, 67 yards to the house from Russell Wilson to give the Ravens the lead going into the half. It was Wilson’s first interception of the season. Peters baited Wilson into it, dropping off coverage at the snap, then shows incredible closing speed in reading Wilson and jumping the route. There is a reason he is the league leader in INTs since he’s entered the league. 27 of them in five seasons. At this pace over 15 seasons he would tie the all-time mark of 81 (Paul Krause). His play this year earned him three-year extension with the Ravens.

Normally a field goal wouldn’t make a list like this. However, in watching games across the league all year, we truly are lucky to not have problem in the kicking department. Here you have Justin Tucker from 49 yards in sloppy conditions. Had been pouring down rain all day. It was the game of the week in the NFL pitting the 9-2 Ravens against the 10-1 49ers. It’s where they earn their money. Everything on the line. Tucker nails it as time expires for the Ravens eighth straight win. Mind you this ended up being the clincher in a matchup of what becomes the two number one seeds in the playoffs. 31 other teams’ fans are watching their kickers kick, peaking through their fingers. Not us.

Making his second appearance on the list, Mark Ingram made a highlight reel play at home against the Houston Texans in week 11. He receives a dump off pass from Lamar Jackson inside the red zone. Stops on a dime and ducks, literally ducks one defender. Takes off in a sprint again, gets tripped around the four-yard line where a dive and momentum from the hit propels him to the goal line, just getting it over for the score. Goes down as a TD pass for Jackson, but Ingram did all the work on this one.

The guys on the offensive line are always the unsung heroes. Thank goodness quarterbacks and running backs recognize them with lavish gifts, otherwise they would get no respect. Baltimore’s O-line of Ronnie Stanley, Bradley Bozeman, Matt Skura and Patrick Mekari filling in, Marshal Yanda, and Orlando Brown might be the best unit in the league. Orlando Brown went above and beyond his job description of pancaking defensive lineman in week 9. While hosting the Patriots, Zeus Jr pulls Lamar Jackson over the goal line on a quarterback sneak inside the one-yard line. The extra effort by Brown helped the Ravens extend their lead to 37-20, putting the hay in the barn late in the 4th quarter, and giving the Ravens an inside track to the one seed having held a head to head tie breaker over the Patriots thanks to the win. Of course, it didn’t come down to that.

“Hollywood” makes a statement in his NFL debut. The second appearance of the week 1 Miami game on this list. They scored 59 points. You think there wouldn’t be a bevy of highlight reel plays? I digress. We had heard so much about the speed of Hollywood Brown when the Ravens selected him out of Oklahoma with their first pick on draft day. It’s not often that the hype is met right out of the gate. Think about Breshad Perriman. Better yet…don’t. Brown on the other hand put it on display immediately with a pair of long touchdowns in just the first quarter. Against cover-0 and all-out blitz, he caught a short pass and ran away uncontested for a 47-yard score. But the play making the list here is his second score, the 83-yard TD bomb. He had to track the deep ball, never break stride, and change direction at just the right time to elude the DB’s last ditch effort to keep him out of the endzone.

You could do a top ten list of just Lamar Jackson runs and still have to leave some good ones off. If you have to pick one, here is one that slots in at #4, against the Houston Texans. Jackson takes it for 40 yards, eluding five would be tacklers in the process. What else can you say? Oh, and who says you only get to pick one?

In a wild game up in Pittsburgh back in week 5, we saw Marlon Humphrey early in the game allow Juju Smith-Schuster to score a touchdown when he tried punching the ball out rather than going for the fundamental tackle, even a shove out of bounds, and perhaps holding the Steelers to a field goal. Then, he totally redeems himself! The Ravens force overtime where Humphrey lands a haymaker of sorts right on “The Duke”, punching the ball out of Smith- Schuster’s hands. Not only that, he recovers the fumble too, setting up the Ravens in Justin Tucker FG range to win the game. The first game they have won in this current 12-game streak of theirs.

2. Jackson to Snead. Just like they drew it up, right?

Remember week 3? Lamar Jackson recently had a career day against Miami, but it was “Miami”. “It shouldn’t count”, right? The Ravens first real test was going on the road to Kansas City. Lamar Jackson, not in the MVP conversation yet, commits a QB sin, and it works out just fine. 3rd and 17, Jackson rolls out right, past the numbers a good three steps. Like a shortstop backhanding a grounder and making a leaping throw to first base, Jackson leaps, turns, and throws it back across the field! “Oh s***,” was the consensus at the bar I was at as the ball hung in the air all the way to near the opposite sideline where Willie Snead comes from nowhere to make a jump ball catch for a first down, and to keep the game within reach.  The pass probably traveled roughly 40 yards across the field, 23 yards downfield, leaping throw, to a moving target, with defenders waiting to field it, Snead wins the contest. Just crazy.

1. …you know we’re going to pick two though. Lamar Jackson turns on the spin cycle.

Jackson carved up the Bengals for 152 yards on the ground in their week 6 matchup. You would think by week 10, their second meeting, they would have fixed some things. Well in that effort to take away the run, Jackson posted his second perfect passer rating game of the season. He still wins with his legs too, sending the Bengals to 0-9. On my top play of the year, Jackson takes off on an option run, going left off tackle from the 47-yard line. Darts between two defenders, side steps a third, and makes a fourth look silly as he spins away from him, and still outruns the rest of the defense for a touchdown run. Jackson retires to the bench with some classic Oakley shades, and is firmly entrenched as the MVP front runner.

Anthony Levine picks up 60+ yards on a fake punt @ MIA

Gus Edwards longest run from scrimmage by a Raven on the year, 65 yards for a TD vs. HOU