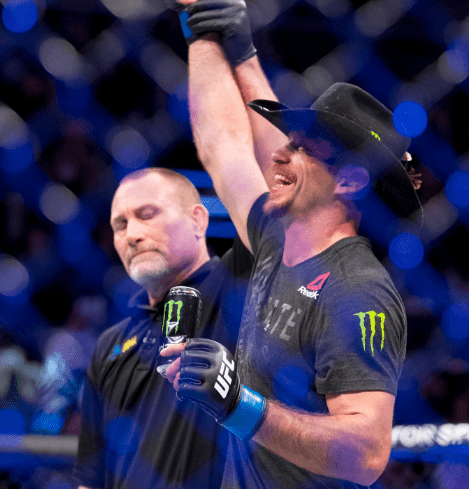 After watching the main event of UFC on ESPN+ 16, Donald Cerrone vs. Justin Gaethje, I got to thinking how they are both great, must see fighters. I think they’ll both be legends when we look back at the history of the sport in 10 or 20 years. Always entertaining and willing to fight anyone, anywhere, at any time. But I’m not sure if either of them will ever be good enough to win a UFC championship belt. Whether it be because of bad match-ups with the champions, a willingness to take too much damage, or just a glass ceiling when it comes to their skill level. That brought me to the idea of who are the best fighters to have never become champion in the premier organization of MMA. I came up with a top five but there are plenty of other options to choose from and I’m sure more contenders will arise as time marches on.

The man who holds the records for most fights in the UFC (33, tied with Jim Miller), wins (23), and fight bonuses (18) has only fought in one title fight in his career with the organization. And in that one he lost to Rafael Dos Anjos in the first round in a fight that was never competitive. Despite that he will certainly be entered into the UFC hall of fame as a guy who fights often and only against top 15 level opponents in two different weight classes (lightweight and welterweight). He is a true gate keeper in the sense that he only loses to guys who are worthy of title shots. Gaethje, Tony Ferguson, Dos Anjos, Nate Diaz, Jorge Masvidal, Anthony Pettis, Robbie Lawler, Leon Edwards, Darren Till. Thats it. His best wins are over Eddie Alvarez, Edson Barboza, and Al Iaquinta. The good thing is if you have a dream match-up with him in mind all you have to do is wait long enough and it’ll probably come to fruition.

‘The California Kid’ became a star in the WEC before the UFC had any divisions under 155 pounds. He won the WEC featherweight belt in 2006 and defended it five times before losing it to Mike Brown, who is now one of the best coaches in MMA. In fact Faber hasn’t won a championship fight since, losing the rematch to Brown as well as to a young Jose Aldo before dropping down to bantamweight as he entered the UFC in 2010. He was given every opportunity to win the UFC bantamweight belt but lost to Dominick Cruz and Renan Barao twice each. The only fights he lost outside of championship bouts were to Frankie Edgar, the former lightweight champion, and Jimmie Rivera. He only loses to the cream of the crop and even came back from a two and half year retirement to knockout Ricky Simon in July. All of a sudden he has put himself back into the title picture once more if he can win the right match-ups.

A teammate of Faber’s, Benavidez has a very similar story to his coach and mentor. His only losses in the UFC are a split decision to one of the best pound for pound fighters in the sport Demetrious Johnson, a knock out in the rematch with ‘Mighty Mouse’, and a split decision with Sergio Pettis that could’ve easily gone his way. He only has two other losses in his career and both of those are to the best bantamweight of all time and Team Alpha Male rival Dominick Cruz, one of which was for the WEC bantamweight title. Benavidez already has a win over current flyweight and bantamweight champion Henry Cejudo (although it was also a split decision that could’ve gone either way) and is currently on a three fight winning streak most recently knocking out Jussier Formiga in a number one contenders fight. A rematch with Cejudo seems to be in his future and a win there would have him dropping off of this list. I don’t think he would complain about that.

Henderson may have had a .500 record in the UFC but that doesn’t tell the whole story. He won his first two fights in the UFC all the way back in 1998 but then left the organization and eventually ended up in Pride. Thats where he really made his name winning both their welterweight and middleweight championships. He came back to the UFC in 2007 and was immediately given back to back title shots, losing to ‘Rampage’ Jackson for the light heavyweight belt and to Anderson Silva for the middleweight belt. He went on a three fight winning streak to set himself up for another title shot but instead left for Strikeforce where he lost to Jake Shields for the middleweight belt but went on to win the light heavyweight belt. He even knocked out heavyweight legend Fedor Emelianenko before he came back to the UFC yet again when they bought out Strikeforce. By then he was past his prime but he did give Michael Bisping a close, competitive fight for the middleweight championship before he retired.

Gustafsson might be the fighter who had the most painful journey to landing on this list. The Swedish light heavyweight came into the UFC undefeated at 8-0, lost a fight to fellow prospect (at the time) Phil Davis, and then went on a six fight winning streak to earn a title shot against Jon Jones. Everybody wrote off Gustafsson heading into that fight but he gave Jones the toughest test of his career and lost a very close decision. He got knocked out by Anthony ‘Rumble’ Johnson but was still given another title shot in his next fight against Daniel Cormier after Jones had the belt taken away from him. That fight was even closer with the judges giving ‘DC’ the split decision. Alex was resilient, working his way back to another shot against Jones last December but it didn’t go nearly as well. He was taken down and TKO’d in the third round. After losing another fight in June to Anthony Smith he announced his retirement. But like most MMA “retirements” it sounds like hes looking for a comeback fight that can get him back in the title picture.