So did the Bills schematically figure the Ravens out? 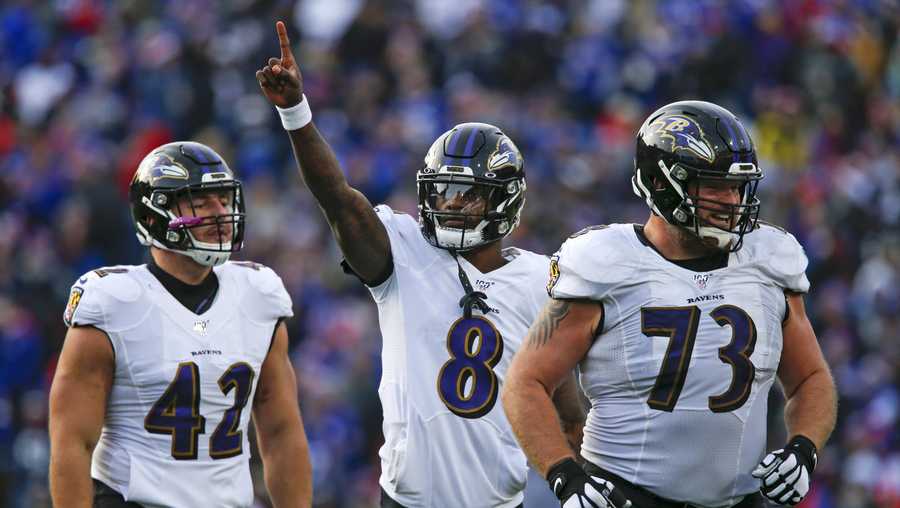 Let’s start with what the Bills tried to do to the Ravens to find success. Mainly, the Bills packed the box. They went to Cover Zero and they dared the Ravens to throw against the front.

I’ll comment right up front on Jackson’s running, too. Lamar only actually ran it 9 times because there were two kneels. So it was really 9 for 43 yards. And to do that against very very heavy fronts is hard to do. Also, the Ravens seemed to expect the heavier looks from Buffalo, over the first 15 plays, by my unofficial count there were 30 snaps by TEs and Ricard. That seems pedestrian because he didn’t break the big one, but I felt like there were two plays that I’ll highlight later here that weren’t blocked right. They missed Andrews.

But the Ravens started out with a good play action play to Andrews and then a nice Lamar Jackson audible to QB keeper. The Ravens were getting the looks they wanted on the rest of the drive, but the Execution came up short. On the deep ball to Andrews, they had their man open and beating coverage and the ball either got knocked down by the wind or was under thrown. There are three guys wide open on this play. Hurst is there for the first and while Andrews does have daylight in front of him, Lamar needs to know that in the wind a 40+ yard throw is likely going to be off target. Note, Ingram is also there for easily a 5-yard gain. A conversion in this context is key, then you’re in 4-down territory. I’m all for big plays but this one wasn’t necessary yet. Also, if you take more stuff underneath earlier, it’s going to open things up for later, too. But this play did not lack for open receivers.

The next play is an example of wanting to get Lamar in a bit of a rhythm, too. That’s a deep out  and a winnable route but you’re not in rhythm yet it’s hard to gauge that throw. They go 5 wide and Roberts is open on a deep out but Lamar over throws him which may be wind and may be over compensating from the first throw.

But when the Ravens came back to it, they were rolling. They peeled off gains of 4, 8, 7, 7 , 6, and 6 chewing up nearly 40 yards in six plays on the next drive. It’s 2nd and 4 and Baltimore is at Buffalo’s 12. Essentially a vintage drive for the Ravens this year. And then they bring in Justice Hill. If I showed you this picture though, you’d have told me this was a first down and a 5-yard gain, maybe a TD. 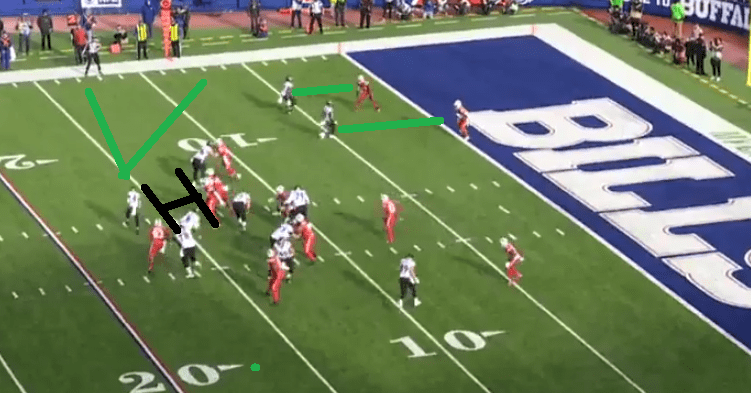 There is all kinds of daylight on this play in front of Hill in a space that he’s running to, he’s got lead blockers and essentially has to beat two guys who are three yards away from him to the edge. Hill doesn’t beat him to the edge and doesn’t use the space very well, doesn’t use his vision to see his blockers, and doesn’t accelerate. I’ve been quite non-plussed with Hill’s lack of speed and burst this year, this play sealed my opinion of him. There is a personnel issue here but mainly this is just execution. That’s a play and matchup I want with the Ravens quality at RB of Edwards or Ingram. That cost us 7 and Edwards had some nice runs to the outside off tackle later in the game, so the Ravens seemed to adjust.

So the Ravens work their way to 2nd and 6 on the next drive. Short gains, short downs and distances. This is read option, with the LG pulling to the right. Lamar seems to know from what he was looking at pre-snap he wants to take this and if Stanley makes his block, it’s a pretty easy play. Lamar has room in front of him. So what does Stanley do, he releases his guy! He has no LG there because he’s on a pull. And he’s got no one to block because if you look at the first screen Brown has pulled coverage over the top. This was a huge play, Stanley needs to fire out, if you ask me, because the play is pulling everyone away from him, there is no second level block to get to and frankly, he doesn’t even release and go up field to the safety, making me think this is blown play from him and more bad execution.

Then Buffalo did something I haven’t really seen all year against the Ravens empty backfield and in fact, something they did on the Roberts route but the Ravens were able to pick it up by blocking all the outside guys and letting the spy fade out. They put six guys at the LOS, they blitz all of them, and then drop the guy from the C or G back after engaging to spy on Lamar. This frees someone up on the edge to come free and hurry the play. Even if the throw is short of the down and distance markers, there isn’t going to be time for routes to develop 10 yards down the field with a free blitzer.

You’d think the Ravens might adjust this package against this look, after seeing twice in five wide? The first side by side is the 3 and out which is the same look as the Roberts out that was over thrown. The second, is the Snead INT. It’s a slightly less dangerous throw to daylight if Snead runs away from the middle of the field. And frankly, probably has a better pickup. But the Bills rushed the same package on passing down and distances and the Ravens weren’t ready for it and it resulted in an INT.

So the Ravens make the right adjustment out the five wide sets they had so much success with coming into this game. On the next 3 and out, they go with the Shotgun look with the RB in the backfield, and the Ravens actually have a big play, maybe a TD open. Brown is isolated on the far left hash, you can see him way down at the 20 in the second frame, it’s ideal for a deep out route and captured right at the moment. The Bills are showing Cover 2 but Lamar is looking right at the FS who drops in as a robber in the box with the SS going deep into the single high.

He should know there that he’s got Brown alone because the Robber cuts off the deep in from Snead. At that point, his only read is Brown as there are five defenders right of the right hash (the short side of the field!). Lamar pumps to Hurst and Brown is gone. Look at the pocket outside of Stanley and look which direction Brown’s hips are facing and which direction the CB who is covering him are. Brown ends up with about 3 yards of separation and Brown is already rolling at full speed. Lamar could roll out of the pocket here or just step back and chuck it deep, instead of he looks right instead of left and misses his man.

The receiver basically moves one yard and Brown has moved 4 yards. It’s an incredible deep out double move, and something the Ravens should be looking to build on. 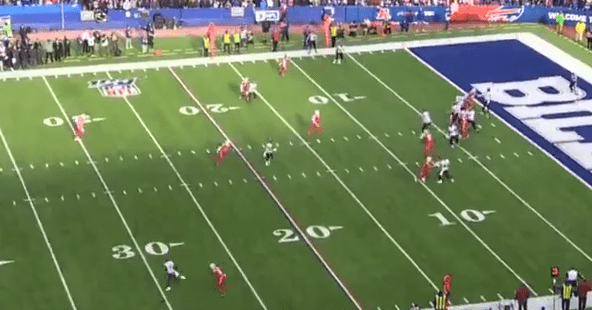 In the second half, the Ravens come out and attack them vertically. The Hurst TD was a thing of beauty. Just a Cover 0 look, and a deep crosser. What’s fascinating about this play, is that there are 9 guys in the box or at the LOS inside the numbers here! The Ravens have to be willing to look at and attack deep on the routes designed to get there when they get these looks. This is different than the Andrews look, if you scroll up and remember I criticized Lamar for looking for Andrews deep, because the Bills were only rushing 4.

But look at this separation. The play action gets Edwards to come down in his zone, so Hurst can run over the top. And then boom, just an easy lead throw. Lamar did take a shot here though and I wonder if this was the play he was hurt on. 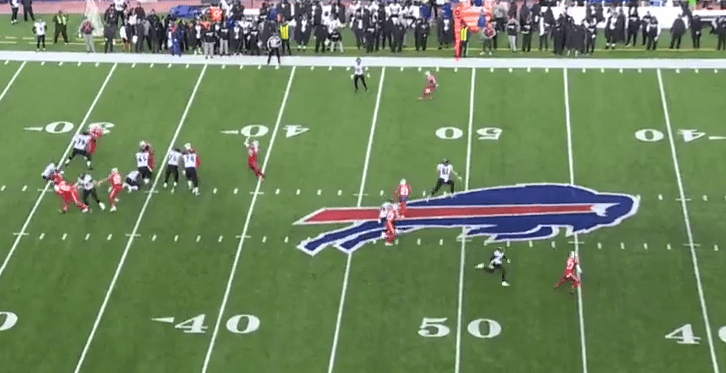 After that, it seemed like the Bills reverted to a Wide 9 type scheme. It was mostly 7 in the box, with wide DEs ready for contain and the LBs all squeezed into the middle to take away the run. Here is an example on the next drive on a play that stalled out for the Ravens. The Bills are in a Wide 9, the weak side LB creeps into the A-gap and at the snap Stanley goes to block the LB. Stanley drives back the weakside LB and then no one blocks the DE! Snead and Hurst just let him split them and no one even touches him. Ultimately Hurst blocks no one on this play but someone needs to key the DE. You can see all the space on the first screen, and you can see the Ravens blockers accounting for all the Bills except for the deep FS in the second screen. This was such a missed opportunity as well.

I’m going to cover one more play that I thought was on the execution side of the Ravens problems. I LOVED this play. A lot of fans thought it was too cute and it was silly but this was a TD play if executed right. Of the 11 defenders, 8 of the are to the right of the left hash. Of the Ravens OL, all 5 are to the left of that hash. Now the OL doesn’t start blocking soon enough. They should have before this point but Stanley, Bozeman, Brown are all kind of just standing around, I’m assuming to sell this play. But even if the S on that side and the MLB all break towards Brown, that’s still 5 blockers, plus Brown on that side of the field. In terms of play design, you couldn’t ask for more. The OL doesn’t get it done, but this is another play I felt like would have been a TD.

Ultimately, the Ravens need to figure out what they want to do with a Wide 9 blocker on the weakside. That took away two plays that were big gains. They need to adjust to the six man blitz in the empty sets (something they did). And they need to connect on the big plays when they are there. They missed a TD to Andrews on the first drive, botched the Hill off tackle rune, missed two big Lamar against the Wide 9, and missed the two big passing plays to Brown.

If you ask me, the Ravens were ready for what the Bills threw at them schematically, they just got bogged down in the execution.