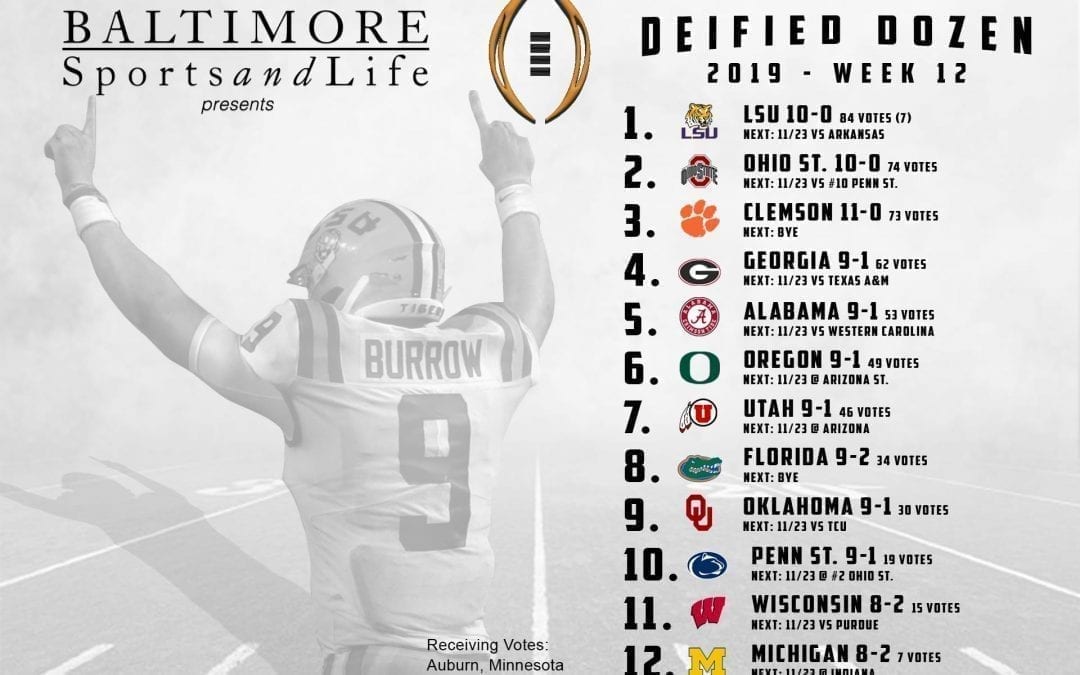 Following Week 12 of the college football season, the Playoff scenarios are beginning to narrow. Each week during the season our panel of experts will rank the Top 12 teams in college football. This season our panel includes:  Rob Shields, Mike Lowe, Zack Kiesel, Brian (Pedro Cerrano) McGuire, Chris (Ricker Says) Ricker, Steve Birrer, and Chris Stoner. We are looking forward to another exciting season of college football and race to the College Football Playoff.

Week 12 was a pivotal week in the 2019 college football season, and not all of it had to do with who won and who lost. But there were two head-to-head games among the Deified Dozen that gave a little more clarity for one team, and put another team on the ropes. First, #4 Georgia held on at Auburn to clinch the SEC East title. All the Bulldogs need now is to avoid a major upset in their final two games and they will play the West champ, likely #1 LSU, to seal a CFP berth. Meanwhile, Minnesota could not avoid a fate that has befallen many other ranked teams, that being a loss at Iowa. The Gophers not only were knocked out of the Dozen, but in all likelihood they will now have to beat #11 Wisconsin to win the Big Ten West. The Badgers vaulted back into the rankings after a pair of tough midseason. #12 Michigan also made its first appearance since Week 2. Meanwhile, Oklahoma made some noise with an impressive comeback from a 25-point deficit at previously unbeaten Baylor. The win at least put the Sooners back in the Playoff conversation, even though they likely don’t control their own destiny at this point.

Meanwhile, the major story of the weekend came in a game where the final outcome ended up being exactly what was expected; but #5 Alabama’s win against Mississippi State came at a heavy price, as QB Tua Tagovailoa was lost for the season due to a serious hip injury. While secondary to the sorrow for Tagovailoa’s situation, his loss could also have a tangible impact on Alabama’s chances of making the Playoff as a non-conference champion like they did in 2017. Coupled with a weak schedule (their most impressive game so far was probably one in which they lost), it’s very possible we could see the first CFP not to feature the Crimson Tide since it began in 2014. Alabama will need both a victory over Auburn in two weeks, where it would help greatly if new starter Mack Jones looks impressive, and probably some outside help on top of that.

Looking strictly at the upcoming week, there is one major head-to-head matchup that will further clear the Playoff picture….or muddy it up even more. #10 Penn State will travel to Columbus to face the #2 Buckeyes. A win clinches the Big Ten East for Ohio State, while an OSU loss puts the Lions in the driver’s seat for the division. But an upset by Penn State could really throw the CFP rankings in disarray. Many believe Penn State still controls its own destiny to get in, while a 1-loss Ohio State might still get some attention. And as mentioned above, an upset could also be just the opening Alabama needs. So buckle up!

You can join in the discussion here.