Can Machado win the MVP? 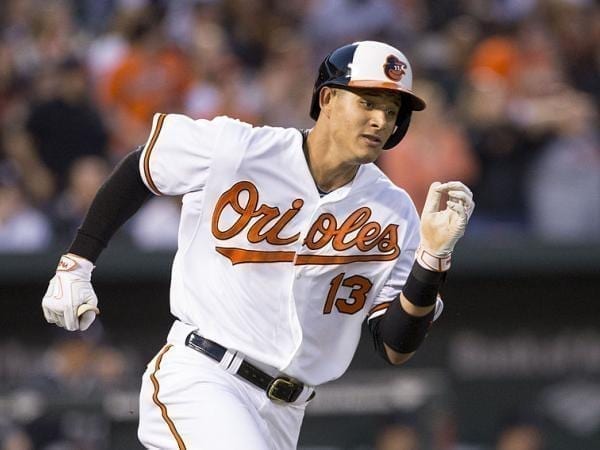 The Orioles enter today’s game vs. the New York Yankees with a 74-61 record. They are a game ahead of Detroit for the 2nd Wild Card, and they trail both Boston, and Toronto by 2 games in the AL East.

Barring a collapse or some really incredible play, I think the last wild card spots will come down to Boston, Baltimore, Detroit and Houston.

In the past, we have seen teams make runs in September on the strength of many factors, one being an MVP level performance from a star player. For the Orioles, their star player is Manny Machado. Many would have Machado as a Top 5 player overall. Even those who have him a notch below, are likely to agree that he is one of the 10 best. Currently, Manny ranks 7th in MLB in fWAR. Of the players ahead of him, Corey Seager and Kris Bryant are in the NL.

Machado has 4 guys ahead of him in the AL in the fWAR category. One of them is, of course, Mr. Trout, who is the best player in the game but likely won’t be considered for MVP because his team isn’t any good. IMO, that leaves 4 guys fighting for the trophy. The 4 players are defending AL MVP (and current favorite IMO) Josh Donaldson, Jose Altuve, Mookie Betts and Machado. Donaldson has been worth 1 more win this year than Manny and the other 2 have been worth .5 win more. Now, before I go any further, I am just using WAR as a tool here to talk about overall value. Highest WAR doesn’t necessarily mean MVP but it’s an easy way to look at things. When we look at bWAR, Machado is at 6.4. Donaldson is at 6.9, Altuve is at 7.3, and Betts is at 7.8.  (Trout’s number is 9.2.)

Looking at defense first, the best defender, by position, according to UZR and UZR/150 is Betts. However, out of the 4, Betts plays a position that isn’t a premium defensive position. The worst defender, according to UZR, is Jose Altuve. He is only graded out as an average or so defender at second base. Both Donaldson and Machado grade out as plus defenders at third base although Manny grades out better and that doesn’t even take into account that he played a lot of SS this year and that will have an overall effect on his UZR number. Machado is obviously in the conversation for best defensive players at any position in all of baseball; but Betts is having a great year. Beyond UZR, Machado’s Defense Runs Saved (DRS) number is 11. Betts’ DRS is 23.

When you look at the offense, you are seeing 4 players having outstanding seasons. Altuve has a slash line of 348/409/563/972. He already has set career highs in homers, triples, runs scored and RBIs. He is going to get 40+ doubles for the third straight year and will also get 200+ hits for the third straight year. He also has 26 steals and likely ends up with over 30 steals for the 5th straight season. He has been worth 1.7 more wins, according to fWAR, than the next closest second baseman in all of baseball. He is running away and hiding for the AL batting title.

Betts is having his coming out party this year. A former highly rated prospect, Betts has been a monster. He currently has a 919 OPS. He already has 30 homers and 36 doubles. He is 2 RBIs away from 100 and has scored over 100 runs. He is top 10 in all of baseball in BA and, as I already noted, he is playing an excellent defense in RF. The issue for Betts is that he has a team full of great hitters on an offense that is the best in baseball. How much does that hurt his cause?

Donaldson is also having a great year. He is playing his usual above average defense at third base and has led his team to first place in the AL East. His OPS is 985, he is getting on base over 40% of the time and he will likely get right around 40 homers and a 110 RBIs. He is having another huge year and is doing it for a team that may be the best in the AL.

Then you have Manny, who is having arguably the worst offensive year of these 4, which is saying something since he has a 922 OPS and a 14- wRC+ (which is tied with Betts and behind Altuve and Donaldson). He will hit 40+ doubles and has an outside chance at 40 homers as well. That is a relatively rate feat in the history of baseball (less than 30 players have done that in MLB history…Betts could do it as well). As I mentioned, Manny has the defensive advantage over these guys in my opinion due to Machado playing a more difficult position than Betts, so that will be factored in here in this race.

For those of you reading this who feels Zach Britton should be in the conversation, I don’t disagree. I think you can easily make the argument that Britton is more valuable to the Orioles (with how the team is constructed and wins games) than any player in the sport right now. That being said, 60ish innings isn’t likely enough of an impact to get the voters to give him the trophy.

To me, this race could simply come down to that wins the AL East. The Astros are the longest shot to make the playoffs out of these 4 teams and while I don’t think that should be the determining factor, the bottom line is it will be for the voters. Can Manny get hot and help carry the Orioles past the Jays and Sox? My guess is that if things hold the same as they are now and the 4 players mentioned here continue to perform at roughly the current level they are now, Donaldson will win the MVP for the second year in a row.

However, if one of the other 3 can do something really special and be viewed as the reason their team made the playoffs that could sway the vote to them. Manny may need to do what he did in May. In that month, he had a 344/394/667/1061 slash line. He hit 10 doubles and 7 homers. If he can have a similar month, which helps lead the O’s to an AL East Title – he might take home the hardware.

It’s going to be a tight race. Machado is likely currently trailing the other leaders, but much like the race for the division, the race for MVP is far from over.