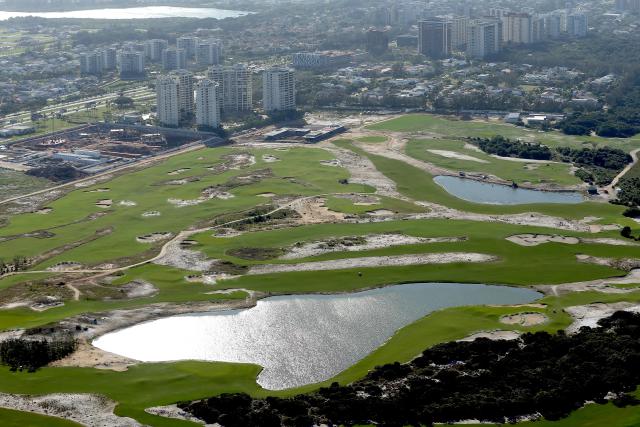 …ok, not really….but maybe on the women’s side….

Just because all four majors are in now the books, doesn’t mean that important golf is done for the year.  For the PGA tour, the four-week FedEx Cup Playoffs will start with The Barclays at Bethpage Black in two weeks, August 25th. After the Tour Championship (September 22nd-25th) the Ryder Cup follows from September 30th to October 2nd.

Before we get there, the talk of the entire world right now is the Summer Olympics in Rio. It seems that some of the negative publicity has been overblown leading up to the games. A lot of folks are reporting they have yet to run into any mosquitos whatsoever. Security is high and safety doesn’t seem to be an issue. The open water events are going off without a hitch. The athletes are “having fun.” Political issues and IOC corruption aside, the focus on these games, unlike most of the Sochi Winter Games two years ago, has been solely on the athletes. It’s rather refreshing.

With that, I’ll focus on the Men’s and Women’s Olympic Golf Competition. The first such competition since Canada’s George Lyon took home the gold in the men’s individual event the last time golf was an Olympic sport during the 1904 Summer Games in St. Louis, Missouri. 75 golfers, three Canadians and 72 Americans, attempted to qualify for a 32 man match play, bracket style tournament. Lyon was the only Canadian to make the round of 32 match play round, and went on to out last all of the Americans.

Discuss general thoughts throughout the games there as well.

If you are unfamiliar with this games format, don’t feel bad. Just a week ago, Matt Kuchar (USA) wasn’t aware it was an individual event rather than team competition, and he’s playing in it! The men tee it up tomorrow, and the women next week. Both competitions are a typical tournament format with four, 18-hole rounds from Thursday through Sunday. The exceptions are there are no cuts. The field will be 60 players a piece and groupings will be 20 threesomes on all four days. Individual stroke play, with the top three finishers at the end winning their respective medal. In the event of a tie for any medal position, a three-hole playoff will determine the winner.

Adam Scott (AUS), who will not be attending, feels the structure and qualifications of the event are “weak”, and went on to say, “Just having another 72-hole golf tournament with a weaker-than-most field doesn’t really pique my interest.”

While Scott makes a valid point, the majority of golfers look at it as a chance to gain more respect as athletes. Walking into the Opening Ceremonies along side some of the best athletes in the world. Some have said winning an Olympic gold medal would trump winning any major championship because of the rare chance they will get, and while majors are individual accomplishments, winning a medal is winning it for your country. They are excited to represent their country, even if they might be pitted against their fellow countryman for a medal in the individual format.

On the men’s side, six of the worlds top ten players decided to opt out in fear of the Zika virus. Jason Day (1), Dustin Johnson (2), Jordan Spieth (3), Rory McIlroy (4), Adam Scott (8) and Branden Grace (10). For the women, many of the best will be on display. Lee-Ann Pace (37) is the highest ranking player choosing not to participate. However, South Korea dominates the rankings on the women’s side with 11 players ranked in the top-25, meaning seven of them didn’t qualify.

Of the top 15 players in their respective world rankings, only a maximum of four from one country can be represented. After that, highest ranked players from each country that do no not have two golfers have made the field. The host nation of Brazil is guaranteed  at least one spot, as well as one golfer from each Olympic geographic region (Americas, Europe, Asia, Africa, Oceana).

The event will be a brand new test for all competitors as the Gil Hanse designed “Olympic Course” has not been played before. It will be open as a public course after the games are over. Players have been in town since this past weekend getting a feel for the layout.

The Olympic Course is a links style layout with no trees and no rough. A ball rolling through the fairway can roll all the way into some serious trouble spots. Bunkers, high grass, water, without the rough there to slow it down. However, the course plays relatively short at 7,128 yards for the men, and 6,245 yards for the women. It will be a par-71 for both.

The shorter length means some shorter par-4’s that players can control their tee shots with irons off the tee and still have easy approach shots in. Control maybe important if the fairways get bouncy and the ball rolls uncontrollably into trouble. We saw some of this at the 2015 U.S. Open at Chambers Bay. It also means that the big hitters can try to run some drives up onto the greens off the tee. We see more and more players taking the risk-reward route in the last few majors where a few holes tempt you to do so. When you are a pro and comfortable hitting a bunker shot over a six foot lip, two feet in front of you, why not, right?

The final stretch at the course is a drivable 303-yard par-4 16th. A short 133 yard par-3 17th, and a eagle worthy 571-yard par-5 18th. Birdie-birdie-eagle is a strong finish. But eagle-birdie-eagle might pop up as well. Strokes will certainly be out there to be gained at the end.

The forecast is for beautiful weather this weekend for the mens event. 70s and 80s, sunny, calm winds. With calm winds and a course with short par-4s, I expect a lot of low scores. -20 for the gold medal is pretty realistic. But we’ll have to see how the course plays out.

Golf has one, maybe two chances to get this right for future Olympic Games. It has been selected for the Olympics for this year, and the 2020 games in Tokyo. If it flops this year, it might not get an invite to further games after Tokyo. Adam Scott mentioned the field being weak, and that maybe the case. but you also want a great number of countries represented. In golf, you can’t count anyone out so I have no problem with the field. An underdog can all of a sudden strike the ball incredibly well for a few days. A course can suit someones game a lot better than others.

Golf is also a sport of many formats. Individual, team, stroke, match play. Similar to swimming and all it’s different strokes, distances, and relays. Since you can get very creative with golf, Scott maybe right that a 72-hole tournament just like the rest of them might not be the draw they hope. They could have a nine-hole par-3 contest one day. Do a team 36-hole match play event over two days. How about a team closest to the pin challenge. Treat it like archery. Four to a team. Each player hits three shots to a pin. Add up the distances to the pin of all 12 balls and the closest overall distance to the pin wins. Anything to make it a little interesting for the viewer who doesn’t want to watch hours upon hours for four whole days to finally get to a winner.

But absolutely keep a traditional individual 72-hole event like we’ll see as the “gold standard” event, like the 100m dash in running, or individual all-around in gymnastics. Adding other small events gives them a chance to win two or three medals during the time there. Give the viewers a few different options.

Just spitballing here. It will be interesting to see how the scoring plays out. How many of the world’s lower ranked players hover on the first page of the leaderboard? Will the dominant players have an insurmountable lead going into the final round? I for one hope the competition is close and fierce and that the event is a huge success.

I hope the importance of potentially adding “Olympic Gold Medalist” to one’s resume and representing your country, makes the guys sharing Adam Scott’s opinion come around to this idea. Golf as an Olympic event could potentially reach new fanbases. Particularly young people. That’s what golf has desperately been seeking since Tiger Woods burst on the scene 20 years ago.

Canada looking to defend. Golf hoping to draw in young people as well as more women to the game. Brooke Henderson, Ontario native, checks all those boxes and could be one of the favorites to win the women’s event at Rio. At just 18-years-old, Henderson already has eight professional wins, three on the LPGA Tour, and has her first major title. The Women’s PGA Championship back in June. She defeated world number one, Lydia Ko in a playoff. Ko will represent New Zealand in the upcoming Olympic event and has been ranked number one for 42 straight weeks.