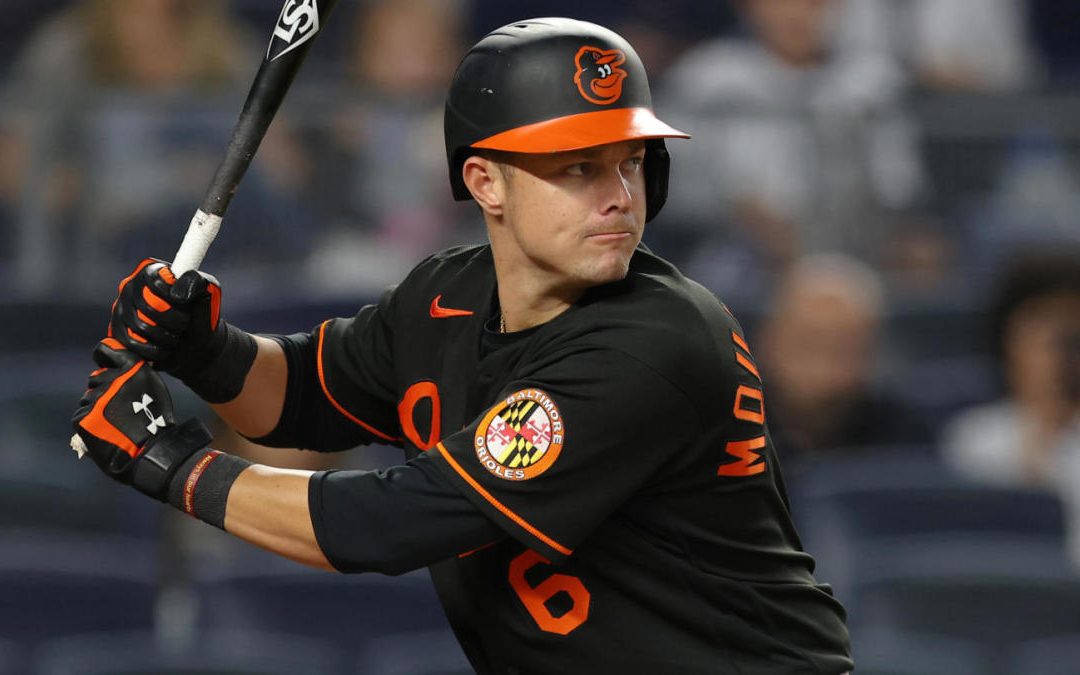 Dating back to late-May, Orioles first baseman Ryan Mountcastle has been as hot as anybody. He’s batting .307/.354/.693 over his last 82 plate appearances with seven home runs and eight doubles. His previous 156 plate appearances included just five home runs and three doubles. This hot streak has carried his overall production beyond league average into fringe All-Star caliber territory. For the year, he’s batting a robust .269/.307/.480.

His triple-slash line is sufficient to spot the greatest weakness in his approach – plate discipline. More specifically, he rarely walks. A pitcher almost has to try to walk him. Mountcastle is an equal opportunity hacker with the sixth-highest swing rate on pitches within the zone. And this is a good list to be a part of: Avisail Garcia, Bryce Harper, Ozzie Albies, Kyle Tucker, and Luis Robert. Of those players, only Garcia has struggled this season, and he’s coming off an excellent season. More ominously, only nine qualified hitters reach more frequently for pitches outside of the strike zone. It’s not all bad news. Robert, Javy Baez, Albies, and Salvador Perez are some of the players with worse chase rates. They’re pretty good! Maikel Franco, Jonathan Schoop, and Jose Iglesias are also ahead of him. They’re not so good.

Lurking one spot behind Mountcastle on the out-of-the-zone swing list is Phillies “outfielder” Nick Castellanos. As we’re about to learn, free-swinging and painful outfield defense aren’t the only traits shared by Mountcastle and Castellanos.

For those unfamiliar with Statcast and the Baseball Savant website, the landing page for each player has a series of “percentile rankings” in key statistics. Let’s look at Mountcastle and Castellanos side-by-side. For this exercise, I’ve used Castellanos’ 2021 data since he’s only recently shaken off an early-season funk. It’s worth noting Castellanos’ current production looks an awful lot like Mountcastle’s 2021. In other words, even consistent hitters like Castellanos experience a range of outcomes.

Off the bat, we can see a number of key similarities. It’s easier to note where they differ. Mountcastle is showing more feel for hard and barreled contact at the expense of a few more strikeouts. Those traits have parlayed into a better average exit velocity even though their best contact (Max Exit Velocity) is comparable. He’s also a little bit slower which explains why he can’t quite fake it in an outfield corner like Castellanos. Ignore outs above average – that’s an outfielding metric. I’m unsure why Mountcastle has a rating (he should not).

Other Statcast metrics confirm further similarities. Each produces an average launch angle of roughly 15 degrees – close to optimized for doubles and home run power while hitting for a decent batting average. The vast majority of their batted balls fall between 90- and 110-mph. These are exit velocities which serve to increase a hitter’s batting average on balls in play (BABIP). Sure enough, Castellanos has a career .330 BABIP compared to a .318 BABIP for Mountcastle. League average hovers between a .290 and .300 BABIP.

Switching over to more traditional statistics, both players run below average infield fly ball rates. Castellanos was almost Votto-ian prior to 2021. A low infield fly ball rate typically indicates what’s referred to as a tight launch angle. You can think of this as consistency of contact. A 15-degree average launch angle is better when it’s composed entirely of 15-degree contact. If the angles range evenly from 0 to 30 degrees, that means there’s a bunch of easy outs going into the 15-degree average.

Superficially, the pair tallies comparable walk and strikeout rates. Their batting averages, on base, and slugging percentages fall within the same ranges. Which means more advanced stats like ISO, wOBA, and wRC+ (don’t worry about these if they aren’t familiar to you) also appear similar. Here’s this paragraph in table form:

As noted, the two players make similar decisions on when to swing (most of the time) and when to take (not so often). Castellanos is only minutely more discerning than Mountcastle. One detail to note, Castellanos has always been hackastic, but he’s aged into this extremity of aggression. When he was Mountcastle’s age, he was relatively patient compared to now – though he was not patient compared to the league.

I find myself wondering if changes in the way the game is played help explain some of the differences between early-career Castellanos and current Mountcastle. From 2013-2019, Castellanos hit nearly twice as many doubles (229) as home runs (120). That relationship was closer to one-for-one during his two seasons with the Reds. This year, he has 17 doubles and seven home runs. Mountcastle, however, has just 39 doubles compared to 50 home runs. Generally, only the great home run hitters (or flawed homer-or-bust role players) have considerably more dingers than doubles.

Castellanos debuted prior to the fly ball revolution. Many unknown truths were public knowledge by the time Mountcastle was nearing his Major League debut. Advances to the science of hitting have led to sharply increasing hard and barreled contact rates in recent seasons. It could be that a peak-aged Castellanos would have shared current-Mountcastle’s penchant for barreled contact with more home runs than doubles.

Does It Mean Anything?

Only in a historic sense. The two players have followed a similar path to date, but that doesn’t mean they’ll continue to do so. Castellanos is aging and could enter a rough decline phase anytime in the next decade. Mountcastle is young enough to completely reinvent himself. Maybe he learns plate discipline over the offseason. Teams are making incredible hitting breakthroughs that haven’t yet had much of an effect on the field. He’s already ahead of where Castellanos was as a 25-year-old.

For now, Orioles fans can take heart that the most-similar player to Mountcastle is an All-Star caliber slugger who has thrived for the better part of a decade. While this talent profile is seemingly rare, the future appears to be bright.