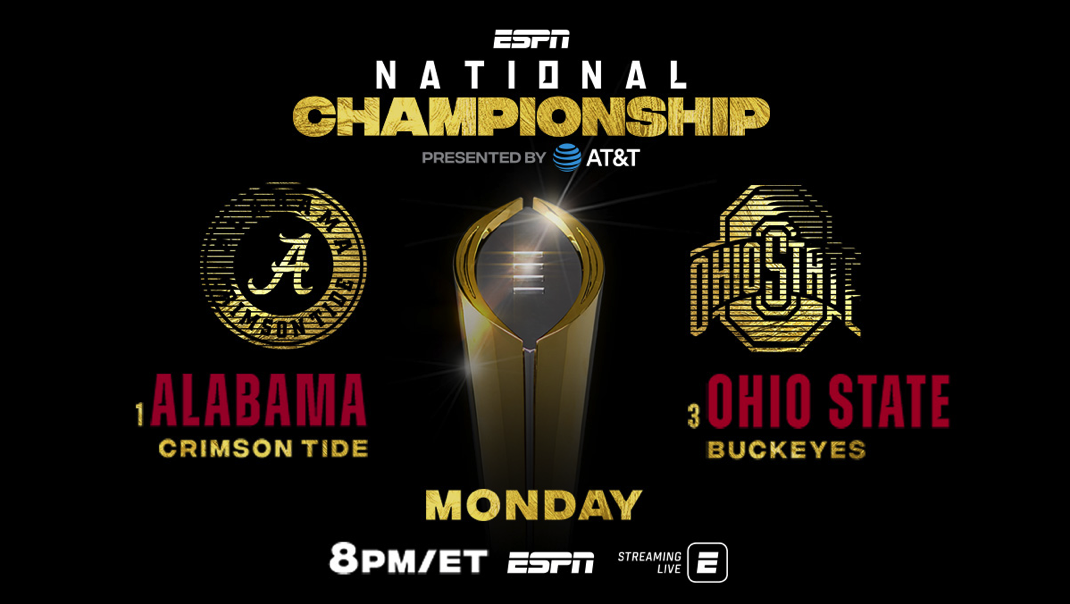 Well, here we are. The end of another college football season. It’s easily been the most insane season I’ve seen in my lifetime. I guess 2007 was kind of insane…but it was insane in a fun way. Not this time.

We also didn’t get the final matchup most of us were probably expecting. Alabama did their part as easily the best team in the land from wire-to-wire. Clemson was probably most people’s top choice as the Tide’s dance partner, but on their way to the title game they forgot to show up in New Orleans to play Ohio State last week.

So now we get to see whether the Buckeyes can slay the giant. By now, everyone’s had their say as to whether the Buckeyes deserved to have this opportunity. I don’t really have anything profound to add one way or another. But in watching them dismantle Clemson, all I can say is that they are pretty damn good. They’ll need to be.

So on Monday Alabama and Ohio State will meet in Miami to settle who goes down in the books as the champion of the 2020 season. Well, we hope it happens Monday. C’mon, COVID, it’s 2021! Looks like viruses don’t buy calendars.

With that, here are my thoughts on the matchup:

For being two of the sport’s blue blood programs, this will only be the 5th all-time meeting between the two (Alabama leads the series 3-1). Their last meeting was in the semifinal of the very first College Football Playoff, played in the 2015 Sugar Bowl. That was the Buckeyes’ one win (42-35).

The Tide have been a juggernaut on offense, and not just in raw numbers. In the age of advanced stats, they have been a model of efficiency as well (#1 in FEI, F+ and S/P+), led the country in points per drive (which counts all meaningful possessions) with 4.34, and had a 54.5 Success Rate. They are led by QB Mac Jones, who led the country in completion percentage (77.0), pass efficiency and yards per attempt (11.3). His top target is Devonta Smith who led the country with 20 TD receptions. Najee Harris leads their running attack, ranking tops in the country in TDs (27) and points scored (126). The three of those guys finished in the Top 5 of Heisman voting, with Smith taking home the award (the first true WR to win it since Desmond Howard in 1991). And lest you think they’re all skill and no braun, their OL won the Joe Moore Award for the best front-five in the game. Here’s another thing….they did all that against an SEC-only schedule. No cupcakes to pad the stats with. Yeah, they’re legit.

What knock can I find on them offensively? Well, their Offensive Coordinator, Steve Sarkisian, was named the new head coach at Texas the day after the semifinal game against Notre Dame. He will still coach the offense in the title game. The last time that happened for Alabama? 2019 when OC Mike Locksley took the Maryland job in early December, but stuck around to coach Tua Tagovailoa & Co in the title game against Clemson. Their offense was a disaster that night. Yeah, I know….pretty thin for a weakness, right? But that’s all I got.

The Buckeyes will have their hands full. That’s not news. The best defense in college football would struggle against that offense, and the Buckeyes aren’t the best defense in college football (that would be their Big Ten Championship Game foe, Northwestern). The Buckeyes aren’t bad on that side of the ball, #15 in F+ and #38 in DFEI. But as the advance stats indicate, they are nothing special either. They are particularly vulnerable in the secondary (#52 in EPA/pass).

But recent history and the eyeball test says they may not be that bad. They gave up just 10 points and 329 yards to Northwestern (shutting them out and forcing 3 turnovers in the 2nd Half). In the Sugar Bowl their defensive front harassed Trevor Lawrence mercilessly, forcing him into 3 fumbles (1 loss), an INT, sacking him twice and hitting him numerous other times. Clemson’s offensive machine scored just 28 point in the game, and the last TD was borderline garbage time. At the end of the game Lawrence had a look on his face that resembles….well, what he’ll probably look like by Week 12 next season playing behind the Jaguars O-line.

If the Buckeyes bring the pressure on Mac Jones like they did Lawrence, who knows?

So Alabama is the #1 offense in college football. Who’s #2? Ohio State, according to F+ (they’re #3 in OFEI). They score 3.41 points per drive, good for #9. This despite facing 3 of FEI’s Top 10 defenses this season (Northwestern, Clemson and Indiana). QB Justin Fields was outstanding at times, but struggled at times as well (namely the 2nd Half of the Indiana game and first Half of the Northwestern game). But his performance in the Clemson game was a masterpiece, with as many TD passes as incompletions (6 on 22 of 28). Perhaps more remarkable is that 4 of the 6 TDs came after he took a helmet to the back that left him in obvious discomfort. The rushing attack is led by Oklahoma transfer Trey Sermon, who averaged 124 yards per game and like Fields, saved his best for when it mattered most in the Sugar Bowl (193 yards on 31 carries, 6.2 yards per carry, 1TD). While there are no Devonta Smith’s in the Buckeyes’ recover corps, Chris Olave, Garrett Wilson and TE Jeremy Ruckert give Fields plenty of options.

The offense’s weakness would have to be red zone scoring. On 39 trips they reached the end zone 25 times. That’s a 64.1% rate and only 55th in the country. Worse yet their overall red zone scoring percentage is just under 77%, which ranks #100. Not good heading into a game where their only shot to win may be to finish on top in a scoring duel.

The Tide defense, as always, is loaded with elite talent. However, as a unit they aren’t the dominant bunch they’re traditionally known as. They enter this game #27 in the country in DFEI. They did only surrender 19 points per game, good for 13th in the nation. Perhaps they only seem less dominant because their offense gets all the attention and accolades (deservedly so). Even Nick Saban, the defensive whiz who swore by the ground-and-pound offensive style for most of his first decade in Tuscaloosa, admitted [grudgingly] that in present day college football, offense wins.

While the Tide were solid all season long when it came to stopping the run and takeaways. After early seasons struggles they were improving at slowing down the passing game and surrendering points. Then came the SEC Championship, where they surrendered 408 yards/3 TDs through the air to Kyle Trask and the Gators. They stiffened up once again against Notre Dame, to the tune of just 208 passing yards and no passing TDs (and 14 total points, 7 of them in garbage time). Can they repeat that solid performance against an offense even better than the Irish? That might be what this game comes down to.

Let’s face it, since its inception 6 years ago the CFP has delivered far more snoozers than nail-biters. This game has more of a snoozer feel to it going in. Alabama looks like the much better team, and has consistently played like it through 12 games so far, while Ohio State had a couple iffy showings in its 7 games up to now. Both Vegas (Alabama -8) and ESPN’s FPI (Alabama 62.5%) seem to agree. But you don’t have to stretch your imagination too much to envision Fields & Co having a hot night, and the Buckeye defense doing just enough. That’s why they play the games.

Conventional wisdom says we should see plenty of scoring. Though if that’s the case, an over/under of 75 seems a tad low. My gut agrees with the oddsmakers though, and I think both offenses may start off a little slow, but Alabama will be the first to get it rolling, and Ohio State just won’t have enough firepower to keep up. Take the Tide to cover the 8 points.