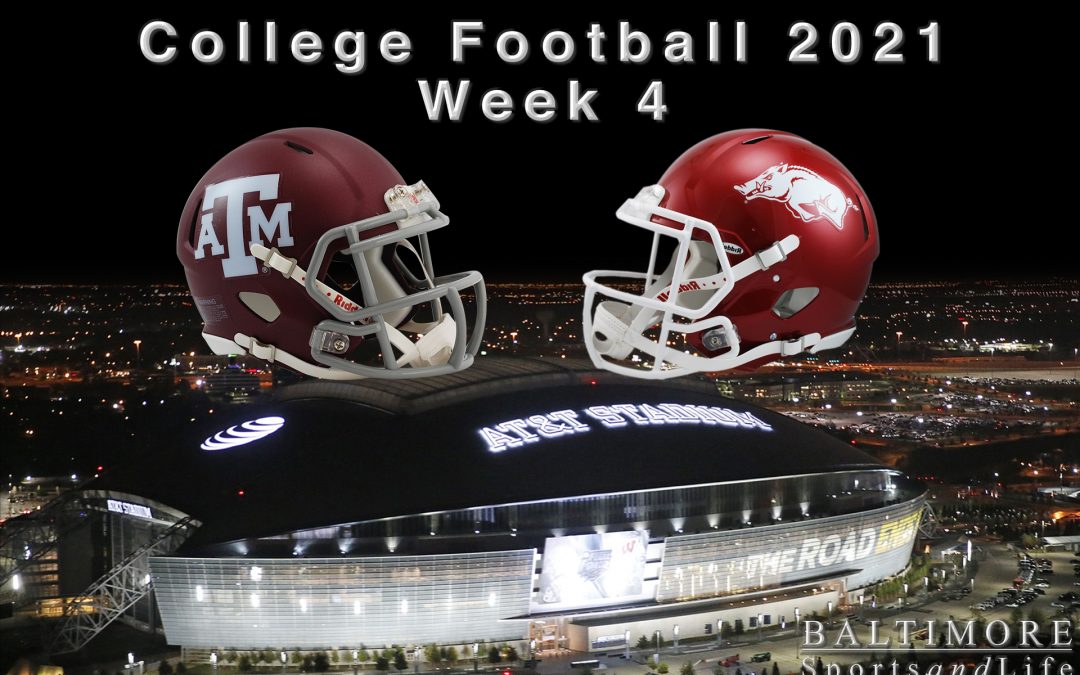 Week 3 provided some thrilling matchups. Here’s my Overreaction and Recalibration based on what we saw.

Overreaction: Alabama showed some serious vulnerabilities in their game against Florida, and may not be up to the standards of previous Tide squads.

I suppose it could be taken as a form of flattery when you not only expect a team to win every game, but expect them to do so in a complete curb-stomping manner. The truth is that this is a sport, played by humans, and no team is invincible. Furthermore, it understates just how well Florida played, how difficult it is to win in a place like Gainesville, and that Alabama fielded a team comprised of numerous players who had never before played in such a hostile environment (remember the mostly-empty stadiums of 2020?).

There are definitely things Nick Saban’s team will want to tighten up from that game. Their defense is not what it once was in the past (last season they surrendered the 3rd most YPG of any national champion ever), but they were absolutely gashed on the ground by the Gators to the tune of 245 yards at 5.7 YPC. Conversely, they would greatly help Bryce Young by improving their own rushing attack (91 yards on 3.3 YPC). And their 11 penalties for 75 yards is not the hallmark of a Saban-coached team. But with the talent they have, I think all of these things are fixable as the season progresses. And save for maybe Texas A&M, they won’t see a tougher combination of opponent+venue in the regular season than last Saturday.

This is not to say I think Alabama merely had a rare off-week and will coast to another title (yes, I’m still sticking with Oklahoma). But rumors of the Tide’s demise are greatly exaggerated; especially since, you know, they still won.

Recalibration: I was not high on Auburn headed into the season, and wasn’t swayed by their smackdowns of Akron and Alabama State. They can prove a lot to me if they manage to keep this [Penn State] game [close] in the 4th Qtr.

Yep, I wrote that in last week’s preview, and I’m a man of my word. That was a ballgame right down to the final seconds. Kudos, Auburn, you’re better than I thought you’d be. In fact, I’ll even add the Iron Bowl, at the Plains this year, to the list of games that could be the spoiler for Alabama. Furthermore, I’m circling Oct 9th on my calendar now; that’s the week Georgia comes to town. Don’t make me look bad!

I definitely think they will have to get better production from Bo Nix than they did Saturday if they are to be a factor in the SEC, and same goes for their OL. But I like RB Tank Bigsby, I like their defense, and I really liked how prepared and unfazed they seemed to be in such a hostile environment at PSU.

Some other Week 3 Odds and Ends:

The Clay Helton firing, and more precisely the USC vacancy, is going to be a storyline of its own this season. It’s already been a hot topic in places like State College, PA, Cincinnati, OH, Jacksonville, FL and Eugene, OR. It sucks, but letting Helton go was the right choice for USC, their players, prospective recruits, and Helton himself. The coaching carousel is just part of college football.

Along those lines, things are quickly going from bad-to-worse for Mike Norvell in Tallahassee. FSU has showed in the past they aren’t going to be too patient (Hello, Willie Taggart).

BYU improved to 3-0, all against the Pac-12 South. They still have two more games to play against Pac-12 opponents; Washington St and USC. If they go 5-0, I propose they be invited to play Oregon for the conference title at the end of the season.

Big win for #8 Cincinnati in Bloomington. The Hoosiers aren’t the team I thought they’d be at the season’s start, but the Bearcats will certainly be among their biggest supporters from here on. Next for Cincy; a week off, followed by a trip to South Bend. They need ND to beat Wisconsin this weekend. Despite a solid win, the Bearcats did not move up in the AP rankings; though Clemson dropped below them after a lackluster showing against GA Tech, they were leapfrogged by Penn State. Of course, this is the AP Poll, which tends to rank G5 teams higher than the Playoff committee, so we’ll see.

There’s a Florida Man Joke in Here Somewhere: Brutal week for the Sunshine State. Gators lose a heartbreaker, Miami and FSU suffer ugly defeats, and soon-to-be Power 5 Certified UCF fell in a close one at Louisville. You have to look to USF and Florida Atlantic’s wins over FCS teams to find a bright spot. Welp, at least Tom Brady still plays there.

From the Life Comes at You Fast Dept.: Many thought Utah QB Charlie Brewer could be the most impactful transfer (from Baylor) in college football this season. He was benched during Saturday’s loss to San Diego State. Tuesday it was announced he has left the Utes program.

Conference realignment dominoes continue to fall. Latest rumor is that the AAC has identified three schools it hopes will replace Cincinnati, Houston and UCF. Those are Air Force and Colorado State out of the Mountain West, and UAB out of Conference USA. Heard that the AAC had wanted Boise State and San Diego State too, but both of them are content to stay in the MWC and wait until the Big 12 decides to expand further.

UAB makes sense; it’s a solid program (despite only recently returning from several years of complete hibernation) with a new stadium and located in a market that is bonkers for college football, even if the Blazers aren’t the #1 (or even #2) team.

Air Force and CSU make less sense to me. Yes, they “expand the footprint” and Air Force has its rivalry with Navy, already an AAC member. But neither school really registers in the Denver TV market, and they certainly don’t raise the AAC’s football profile, especially considering who they are expected to replace. I think the AAC would have been better served refortifying itself in Florida and Texas by targeting Florida Atlantic and Texas San-Antonio.

I know a lot of that wasn’t about actual football. But like I said, it’s become part of the game. Moving on.

Apologies to Notre Dame and Wisconsin, but this game just has a little more intrigue to me. First, I want to know just how legit Arkansas is. Second, I need to see if QB Zach Calzada can do enough to keep A&M a threat to Alabama’s SEC West supremacy. Calzada was awful after he had to come in early in the game at Colorado to replace Haynes King (who is out with a lower leg injury for another 3-6 weeks), though Calzada seemed to settle down and eventually did just enough to lead the Aggies to the win. Statistically he did alright last week, and spread the ball to 7 different receivers, but that was against New Mexico, so I take little away from that. Making A&M’s offense an even bigger question mark is the unknown status of do-it-all WR/returner Ainias Smith, who left the New Mexico game with an undisclosed injury. HC Jimbo Fisher has been very coy about his availability for Saturday, and he would definitely be missed.

The Hogs had an easy tuneup themselves last Saturday, winning 45-10 against GA Southern, after their statement the week earlier against Texas. I like their chances of being able to run the ball on Texas A&M and controlling the tempo/clock. That could put more pressure on Calzada to produce. My question with Arkansas is whether or not they are ready for the attention and expectations that come with being a ranked team against what is still a Top 10 team, backup QB or not. This is the Razorbacks’ first appearance on the SEC Game of the Week since 2017, and they have not beaten A&M since the Aggies joined the SEC in 2012.

I imagine the tone of what I just wrote would indicate I’m taking Arkansas, at least to cover if not outright win. And yet, I still lean A&M. While they may have some key injuries to overcome, everything suggests they should have a talented and deep enough roster to do it. Next man up.

I get it. Most of the attention given to the Big 12 this season has nothing to do with what’s happening on the field. And these two teams, even when they’ve been relatively good, garner little attention. But geez, ESPN is showing Tennessee at Florida on the main channel in that time slot, a game that figures to be an ugly beatdown.

Maybe they want to sell a couple ESPN+ subscriptions to people who can look past the name brands and spot a better matchup. Not sure yet if I want to give in on subscribing, or just rake the leaves in my yard that are starting to accumulate. Either way, I like the Wildcats +6.5 in this one.

These two love to score. UTSA has the better defense. The Roadrunners should be auditioning for an AAC invite (see Odds and Ends above). My gut says take Memphis at home -3.

Usually I try to pick a good Pac-12 After Dark game for you night owls back East. But the Pac-12, save Oregon, is downright putrid. The Ducks played Stony Brook last weekend. This weekend they play Arizona. I thought you could only schedule one FCS team per year?

The Rebels crack my dirty dozen. They get Saturday off before an Oct 2 game at Alabama. Lane Kiffin will no doubt make good use of that extra week for some trolling of Nick Saban on Twitter.