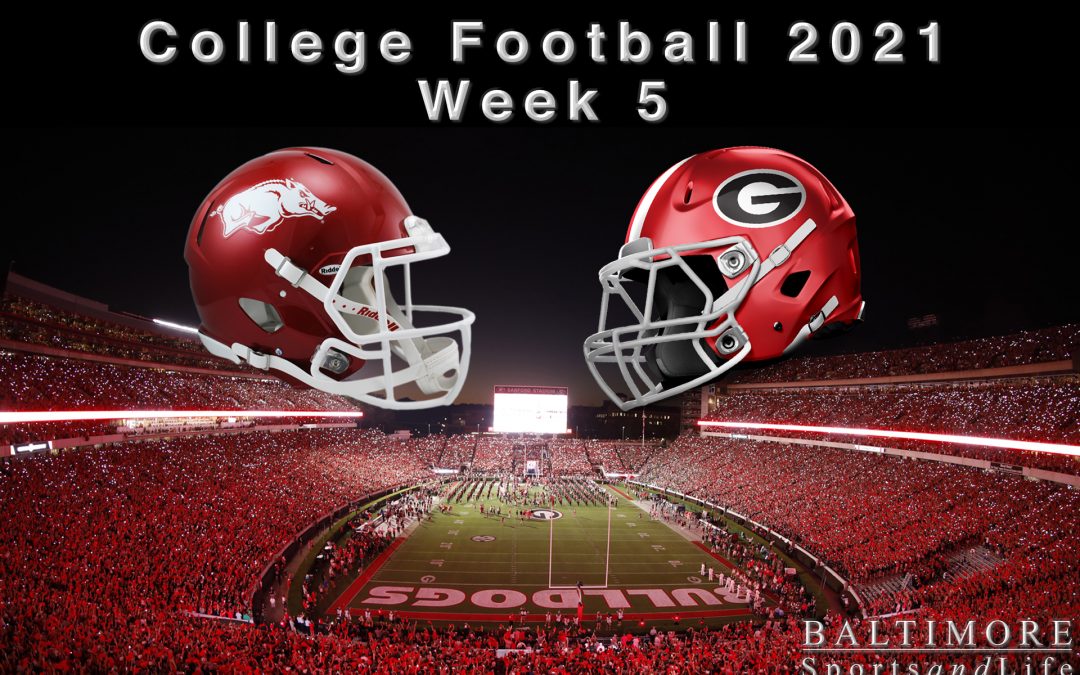 We’re about 1/3 of the way through the 2021 College Football Season, and so far it looks like there is more parity than we’ve seen in some time. While Alabama and Georgia are about as clear-cut as it gets in the Top 2, beyond that there seems to be a huge cluster of very good, but not great teams. Which brings me to:

Overreaction: It’s the end of September and no one is seriously talking about who is going to be in the Playoff yet.

I agree. But my response to that is, “Is this a bad thing?” If you asked someone to list their Top 3 problems with college football since the Playoff era, I bet nearly everyone would have, “It’s always the same old teams in the playoff” in there somewhere. Well, welcome to 2021. COVID’s impact, via an uneven 2020 season and the introduction of “super seniors” seems to have altered the landscape, at least for the first month.

We’ve been long overdue for an unpredictable season, and while I don’t think this will come close to what we saw in 2007, it should still be a very interesting experience.

Recalibration: Florida State and USC just need to find the right head coach, and once they do they will quickly ascend back among the sport’s elite.

I’m not sure if anyone is actually saying that. I haven’t. But there are clearly systemic problems impacting these programs that extend beyond just the head coach. Bruce Feldman and Antonio Morales wrote an excellent piece in The Athletic on USC’s woes (paywall). Andrea Adelson and David M. Hale similarly broke down FSU’s behind-the-scenes issues for ESPN last year.

Suffice to say that no matter how many inherent advantages you have, running an elite college football program requires buy-in at all levels of a university; from the president/chancellor, to the athletic director, and even with booster organizations. That’s not really happening here. Each entity operating on its own agenda is likely to result in a failure to reach potential. USC needs to do more than just replace Clay Helton with a competent coach, and same goes for FSU if/when they pull the plug on Mike Norvell.

One last note specifically on head coaches though. Obviously recruiting and player development are priorities 1 and 1A in looking for the right candidate. Xs and Os are nice, but can (and I’d say should in most cases) be delegated to coordinators. But I think two very important traits tend to be overlooked; adaptability and cultural fit.

College sports, and especially the revenue sports, are changing at light speed. The transfer portal, NIL, and the Alston case have all come to pass only over the past two years. Alone they are a big deal. Together they are tectonic-shifting. And chances are there is more to come. Coaches have to be able to adapt when it comes to filling out their roster and managing/relating with their players.

Coaches also need to know and understand their university, fan base and region they’re in. Expectations vary from place to place. So do the community’s connections with the school and football program. Despite being in very similar predicaments, the same formula it will take to be successful at USC (Los Angeles) is not likely to be as successful at Florida State (Tallahassee), and vice versa. What I’m saying might sound trivial. Many will say a great coach is a great coach, no matter where he is. But I think even the great coaches can only reach their fullest potential if the cultural fit is right.

Welcome to the world of College Football Relevancy, Arkansas. It’s great to have you, but there are rules you must follow if you want to stay in the club. Hangovers and let-downs are frowned upon around here. Your first task will be a respectable showing in Athens Saturday. No one said this would be easy.

Dear Cincinnati, sorry Indiana and Memphis didn’t quite do their part in making sure your schedule is as strong at it possibly could be. The good news is that Notre Dame has done its part, so far. The biggest game in your program’s history awaits.

As an Oregonian, college football is a lot more fun when both Oregon and Oregon State have good teams. That the Beavers overcame 14 penalties for 154 yards to still demolish USC in the Coliseum (first win there since 1960) is remarkable. The penalties can also serve as a reminder that they still have a lot of room to improve. Their next 5 games are very winnable; in fact, I think they could very easily be the favorite in all five (they’re -2.5 against Washington on Sat.). Oregon State at 8-1 by the end of October? Like I said, unpredictable season.

I’m curious to see how well NC State’s overtime win versus Clemson will hold up over the season. Despite a soft schedule ahead, I’m not sure the Tigers are done losing yet. Still, kudos to you, Wolfpack, on your biggest win in years.

Same to you, Georgia Tech.

Wake Forest and Boston College are your only remaining unbeaten teams in the ACC. I’ll keep saying it….unpredictable season

I may have jumped the gun on anointing Auburn a legitimate threat in the SEC. Legit teams don’t need miracles to beat Georgia State on their home field. While they are the ranked team in this weekend’s matchup with LSU, it should come as no surprise Auburn is a 3.5-point dog.

I’m putting several other ranked teams hitting the road on upset notice: #5 Iowa (at Maryland), #14 Michigan (at Wisconsin), #3 Oregon (at Stanford), #6 Oklahoma (at Kansas State) #10 Florida (at Kentucky), and #18 Fresno State (at Hawai’i). I think no less than two of these ranked teams lose outright.

To no surprise, Playoff expansion is officially on hold.

For someone who is tired of the “SEC rules college football” narrative, picking an all-SEC matchup for my Game of the Week for the third straight week is personally rough. That should tell you how much Iike this game. For as much as the polls have shown Arkansas the love, Vegas doesn’t seem to be on board yet, making them an 18.5 road dog.

Arkansas coach Sam Pittman knows Kirby Smart and Georgia well; he spent 4 seasons there under Smart as the OL coach. The Bulldogs have been winning with a similar formula as the Razorback’s previous opponent, Texas A&M; good running game and smothering DL. Pittman had the perfect gameplan for the Aggies. Can it work again?

The Bulldogs will welcome back QB JT Daniels, who has played just one quarter the past two weeks due to a lat strain. They also will have TE Darnell Washington and S Tykee Smith available for the first time all season after preseason foot injuries. As if they really needed to be any better.

This will be the biggest test Georgia has faced since the opener against Clemson, in which their offense was underwhelming and only produced a FG. They go up against a defense that held two quality offenses, Texas and Texas A&M, under 300 yards. This will be the most hostile environment that many of these Arkansas players have ever faced (remember 2020’s empty stadiums). Still, 18.5 seems like a lot. Maybe Vegas is baiting me, but I’m going with Arkansas to cover.

The Other Game of the Week

Notre Dame an underdog as a Top 10 team in South Bend is probably a very rare occurrence (last season’s Clemson game notwithstanding). This time it’s against a G5 opponent. I get it. Count me among the many who are not sold on this year’s Irish squad. Their defense is the real deal, no doubt. DC Marcus Freeman might be the best assistant hire of the year and an early Broyles Award candidate. That he was poached from Cincinnati only adds to this game’s intrigue.

But the Irish offense leaves much to be desired. Don’t be fooled by the lopsided 41-13 score of last week’s game against Wisconsin….two of ND’s touchdowns came on pick sixes and another on a kickoff return. Their offense compiled only 248 yards on the day, and just 9 rushing (on 32 attempts, though they gave up some sacks that count against that). They can’t just hope for Cincy QB Desmond Ridder to throw 4 picks like Graham Mertz did for the Badgers. ND’s offense is going to have to get it done against a defense that is in the same elite league as their own.

The Bearcats had a week off to prepare for this game. That can be both a benefit and a detriment. Offensively it was tale of two halves in their last game against Indiana; lethargic and mistake-prone in the first half, nearly unstoppable in the second. They will need to be more consistent for 60 minutes this time and cannot give the ball away (2 turnovers and 4 punts in their first 6 possessions at Indiana). The defense needs to keep the pressure on Jack Coan, who should be back after leaving the Wisconsin game with an apparent twisted ankle, but has a very shaky line protecting him. The Bearcats D should be able to keep them in this game, though a couple turnovers to give their offense a short field sure would help.

Matt Corral & Co. hung 48 points on Alabama last season.  And I’m not sure this version of the Tide defense is any better than 2020’s. Trouble is the Rebel defense gave up 63 in that game (and 723 yards!). I don’t see the sort of reliable data yet that suggests they have improved improved enough to pull an upset. But when you can score like that, you’re never out of a game. I’ll settle for Ole Miss to simply cover.

This is a packed week. I think we see some more surprises. Buckle up!