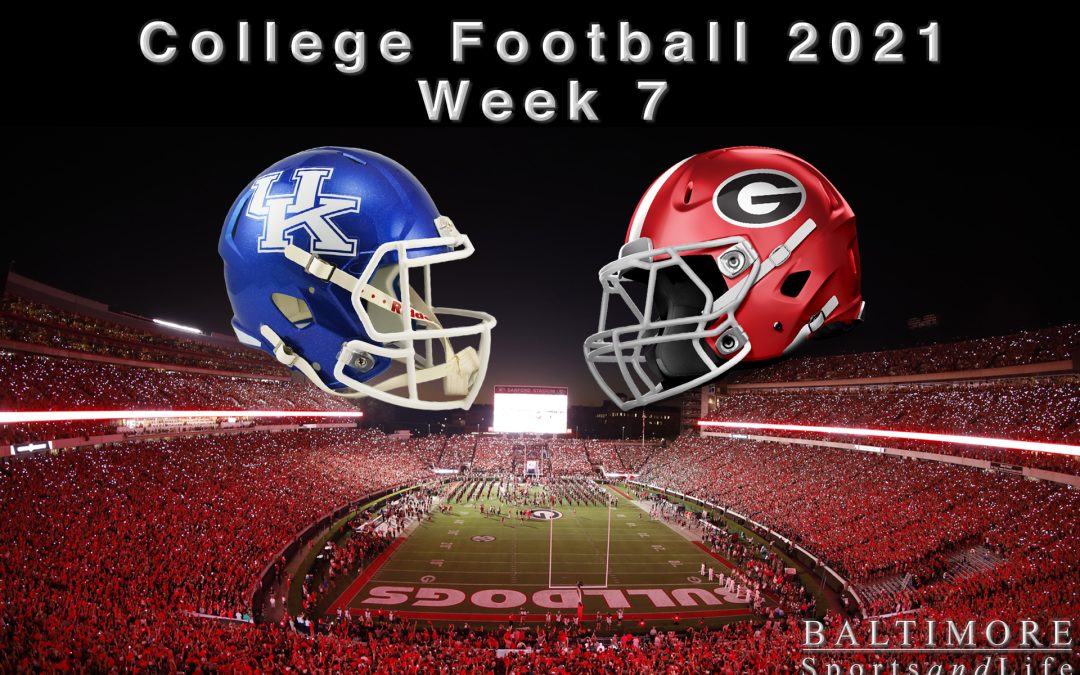 So, what that an epic Saturday, or what? Just when many people thought college football was getting stale, with the same old teams standing at the end, along comes 2021.

Overreaction: With their win over Penn State, Iowa has proven itself to be the Big Ten’s best team.

I’m sorry, Hawkeyes. You’re a very good team, and I’m actually pulling for you to represent the Big Ten in the Playoff. But I’m still not buying that you are a real contender. A closer look at your win over Penn State reveals that when starting QB Sean Clifford had to leave the game due to injury in the 2nd Qtr, the Lions were ahead 17-3 and had an 81% win probability. Penn State’s backup, Ta’Quan Roberson, had attempted all of 8 passes prior to being forced into duty. It went pretty much the way you’d expect; PSU would go on to score just 3 more points in the game.

While we’re here, let’s do a deeper dive specifically into Iowa’s offense, as I do believe their defense is a legit Top 10 unit. Offensively, their Expected Points Added (EPA) is a putrid -0.089. That ranks 116th out of 130 FBS teams. Football Outsiders’ F+ rankings, a combination of Bill Connelly’s SP+ and Brian Fremeau’s FEI, rates their offense -.13, 75th in FBS. Is that the resume of a Playoff team?

Want simpler numbers? Iowa is averaging 4.65 yards per play, 121st in FBS. They are currently tied for 4th in FBS for the most punts (40). The other nine teams that are in the Top 10 for most punts have a combined record of 12-45. Luckily, Iowa’s punter, Tory Taylor, is both very good and has the stamina to handle the workload. Winning field position, along with a defense that gets turnovers, is the best offense Iowa has.

In summary, Iowa has a very favorable remaining schedule against the rest of Big Ten West, which are mostly lightweights this year. The Hawkeyes should be favored in each of those games. But then much tougher competition awaits on the way to the promised land, and that is when their offense becomes a liability; like it probably would have last Saturday had Clifford not been injured.

Recalibration: While Alabama is still the king in the SEC West, their vulnerabilities on defense are real, and could be the death of their title hopes.

I could write off the rough afternoon at Florida as an off week for the Tide D against a solid Gator rushing attack. Especially when they responded two weeks later by bottling up a lethal Ole Miss offense, holding them to just 291 total yards and 21 points (all in the 2nd half after building a 35 point lead)

But giving up 379 yards against Texas A&M, who were reeling after two losses and struggling offensively with backup QB Zach Calzada, is another matter. What had to be especially galling for Nick Saban was seeing his defense give up points on back-to-back drives at the very end, right after Alabama had taken its only lead of the day, to deal them their first loss of the season. The last time I remember watching Alabama’s defense surrendering points with the outcome of a game on the line was the 2016 Championship Game against Clemson. And make no mistake, Zach Calzada is no Deshaun Watson.

I don’t see anyone in the SEC West that is likely to stand in Alabama’s way for the division title. A clash with Georgia in the SEC Championship Game awaits. What will have changed is the sense of urgency the Tide must approach that game with. When we were looking at 12-0 Alabama taking on 12-0 Georgia, it was only an appetizer, with an almost certain rematch in the CFP as the main course. Now Alabama will, in all likelihood, need to win that game to ensure a Playoff spot. Right now, I’d take Georgia in that game, without hesitation.

As of this writing, on Wednesday afternoon, Oklahoma coach Lincoln Riley says he still has not decided on who will start at QB on Saturday for the Sooners; Caleb Williams or Spencer Rattler. Seriously???

Ok, I get it; if you demote Rattler now, and then need him later in the season, he might not be there…whether he’s entered the transfer portal by then or just mentally checked out. But when I look at the way the rest of the team responded to Williams entering the game against Texas, it leads me to believe there’s no turning back at this point.

No sooner do I finish saying BYU might be the G5 team we have to watch out for to crash the CFP instead of Cincinnati…. That was a very nice win for Boise State, and had to feel even better considering the heartbreaking losses to UCF and Oklahoma St they endured.

Ed Orgeron can’t possibly make it to the end of the season, can he? If you know you are going to fire your head coach, and LSU damn well knows they’re going to by now, there is absolutely NOTHING to gain by stringing it out through the season. C’mon, it’s time.

Oregon State. Ugh. Right when I jump on board your bandwagon, you go crash it and burn.

Back to Iowa real quick, WTF is up with their fans, and Kirk Ferentz defending them, for booing on a couple occasions when a Penn St defender was down on the field with an injury? What, you think the timeout was ruining the lightning-quick tempo with which your grass-growing-paint-drying offense operates? Both classless and clueless, Iowa. That’s a bad combo.

Conference USA, perhaps sensing impending doom, sent a letter to the AAC suggesting that rather than the AAC poaching members from C-USA, the two conferences combine and realign along geographic divisions. Cute. Reports indicate the AAC summarily dismissed it. Circle the wagons.

Last week was always going to be a tough act to follow. The matchups might not look enticing this week, but looks can be deceiving too. I wouldn’t turn my back on any week of college football in 2021. I’ll try to find a hidden gem or two for you, but first:

I feel like I have a lot of work to do to justify a matchup with a 23-point spread as the Game of the Week. In truth, this one probably does have more interest to those who pay attention to point spreads than those who just care who wins. But when you have the #1 and #11 teams, both undefeated, and no other games that jump off the table, how do you choose otherwise?

Can I build a case for Kentucky to pull an upset? No, not really. I felt a lot of people were underrating the Wildcats headed into the season. They were my #3 preseason pick in the SEC East. Now they might just be the 3rd best team in all the SEC. That still leaves a Churchill Downs-sized gap between them and the level where Georgia is. So let me see if I can talk myself into UK covering here.

I’ve personally been getting burned repeatedly picking against the Bulldogs ATS this season. Aside from the South Carolina game, when a meaningless 4th Qtr SC touchdown left them 5 points shy of covering a 31.5 spread, they have a clean slate in 2021. Since the Bulldogs might have one of the best defenses ever, never mind just this season, it’s going to be entirely up to Kentucky’s defense to cover. Eh, who am I kidding. It’s time for a change in strategy.

This comes down to nothing more than gut instinct, but I think this might be a bit of a trap for the Bearcats. From the outside looking in, it’s easy to see why they may be on cruise control up until their Nov 20th meeting with #23 SMU. I say overlook Gus Malzahn and the Knights at your own risk. I think this one will be close.

Not So Sneaky Upset Watch

The Wolfpack are the current favorite to win the ACC Atlantic, having already knocked off the kings in Raleigh. The Eagles very nearly did the same, at Clemson. I think these two teams are relatively even, so I’m going with BC at home.

Devils playing in the state of Utah? It didn’t go well earlier this season, and it won’t this time either.

Have a great week!