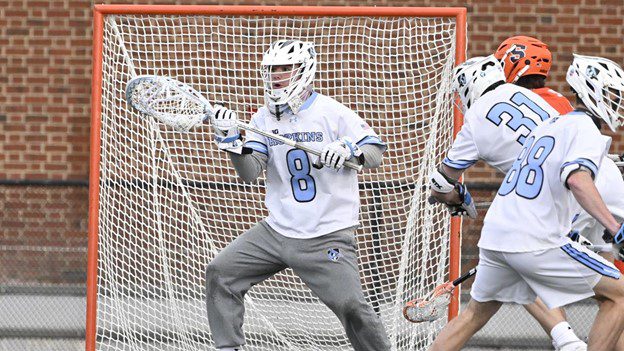 How convenient…on the same day the march madness brackets were released, two ACC teams fall to a couple of teams from Baltimore who in my opinion were heavily outmatched. Loyola started the day by dominating Duke in the first half. Hopkins finished the day by beating their old coach Dave Peitramala by holding on defensively…how convenient.

The rankings are shaking up this week. Eight of last week’s top-20 saw L’s coming their way this past weekend, and for that we have a multitude of teams hanging around in the “Next Few” list. This weekend was dominated by basically one conference. It was not the ACC or the Big Ten, but the Ivy League, who now boast three of the top five teams in the nation and have six teams residing in the top-20, most of any conference in the country. A season after not having a season, the Ivy League sent plenty of their guys to ACC and Big Ten schools via the transfer portal. Instead of falling down the board this season, it looks like every Ivy League school has reloaded and are ready for a deep run into May.

Meanwhile the ACC is slipping and slipping fast. North Carolina does not look like the dominant team it could be last year. Duke has lost three games so far this year, and although they werent May losses to end the year, it looks like Duke is on its way down the path of an early exit. The same goes for Notre Dame, who continues to lose big games, losing again this weekend to Ohio State. Gary Gait’s first year coaching the men’s program at his alma mater looks like it might not even make it to the NCAA tournament.

In preparation for the 1-2 showdown this coming weekend in D.C., Maryland handled Albany inside the old Cole Field House on Saturday morning by a score of 24-6. It was 11-1 after a quarter and the Terps simply coasted from there. Meanwhile, Virginia took down ACC foe North Carolina back on Thursday night in the first ACC Thursday night lacrosse game of the year. They used a big second half run and held UNC to two second half goals in the win. This weekend’s matchup might be the most anticipated regular season game of the year, as Virginia and Maryland are both undefeated andh ave played the best lacrosse thus far.

The three Ivy league teams who round out the top-5 scored a few big wins this weekend to move up the rankings. On Friday night, Princeton’s freshman Coulter Mackesy had a huge performance (including this goal below) on the offensive and and in the battle of the NASCAR style offenses took down Rutgers 16-11. Erik Peters helped out with a massive 21 saves. The Tigers get a run-in with Penn next week.

Penn got their Saturday game postponed to Sunday, and they needed all the time they could get in this one. They scored after a defensive stop with under a second to go to beat Villanova in another nail biting one goal game for the Quakers.

Cornell ended up holding on against a Penn State team who has been quite pesky the past few weeks, playing close games against multiple top-5 teams. They raced out to an early lead indoors

but found Penn State battling back to end up losing a one goal game. Cornell opens up their Ivy slate against Yale next weekend. Otherwise in the Ivy, Dartmouth took down Vermont during the middle of the week to move to 3-1. They get St. John’s next weekend before Ohio State and the Ivy League slate. Michigan had their first tough test, playing Harvard and looking like the team we thought they would be. The Crimson took down Michigan 14-9 behind Nick Loring’s two goals and five assists, while Kyle Mullin had 12 saves. Brown came back from a first half deficit with a stellar ride and goalie play to beat Stony Brook 10-7.

I didn’t think there was any shot Loyola would cover the 4.5 goals that Duke was favored. Loyola did just that, and they did me one better and beat Duke outright after a dominant first half performance. The Hounds got out to a 4-0 lead before Brennan O’Neill showed himself to be a man among boys to make it 4-2 after a quarter. Besides those two goals, it was all Loyola in the first half, outshooting Duke 33-10 which led them to take a 10-2 lead into halftime. Kevin Lindley finally decided he wanted to dodge from X, and he did just that a few times, ending the day with six goals and an assist. The final score was very far from what this game ended up to be, as Duke piled on six fourth quarter goals with the last coming at :32. It was a massive win for a Loyola team who was struggling big time offensively. Sam Shafer had 8 massive saves with a few big ones coming in the third quarter to keep this game out of reach.

Down the street at Homewood, Hopkins took down Syracuse behind their defense and a few luck from the pipe in former coach Dave Pietramala’s first game back at Homewood. The game was even until the third quarter when Hopkins was able to outshoot the Orange again but get all four shots they had on goal to go in. Josh Kirson had a big 14 saves in this one but also got a bunch of luck from the goalie’s best friend: the goalpost. He got that help eight times throughout the afternoon as eight Syracuse shots hit the post. For the Orange, they need to find someone to score not named Tucker Dordevic or Brendan Curry. Those two combined for over half of the Cuse shots, and only six Orange had more than one shot. But once again, this was a massive win for Hopkins after two ACC losses and before they get into the heart of their schedule with a tough Big Ten slate.

Ohio State got a big win inside the horseshoe against a Notre Dame team that has not quite impressed many after their opening 22 goal win. The Irish don’t have it easy the rest of the season, playing teams ranked 18, 2, 13, 12, 13 in their next eight games.

Navy’s starting quarterback Xavier Arline made his first start this season, scoring a goal on 11 shots as he diced up this poor Colgate defensemen behind the goal.

UMBC got a big win over a ranked Utah team on Friday, while in the battle of the undefeated’s Boston U handled Bucknell in the snow.

UPCOMING SLATE, INCLUDING #1 vs #2

We have a massive matchup coming up at Audi Field in D.C. this coming weekend as Maryland takes on Virginia as the two best teams in the country are going to faceoff in front of a massive crowd. In a part of three games at Audi Field, Division 3’s Catholic and Hampden-Sydney play before the top-2 matchup and Duke plays Towson afterwards.

The Terps and Hoos both boast top-15 defenses and the #1 and #2 offenses in the country. The matchup should be what everyone is expecting and I expect an extremely close game. Both offenses should be a problem and should get their looks and goals. I think the faceoff matchup is one to take a deep look into. Luke Wierman of Maryland is sitting at 66% and Petey LaSalla of UVA is 63%. Petey loves to take the rock straight down the field in transition, while Wierman defers to the offense more than less. A rematch of the 2021 National Championship, both teams reloaded and look to be on the same path this season.

Hopkins hosts Navy on Friday night as both teams are coming off big wins that they would like to build on. Navy could take a big step and become dangerous in the Patriot League if they were to take down the Jays. Look for Xavier Arline to be a factor in his second game starting. Navy’s defense needs to keep this low scoring and they have the ability to do so.

Michigan and Notre Dame are both looking to avenge their losses at Arlotta Saturday afternoon. Michigan is surging this year, but took a step back against Harvard last weekend. Notre Dame like I have mentioned before needs to develop their offense around their midfield, but they havce not been getting much dodging help from them. Brett Dobson is a lefty shooter, while Mirer can dodge, but hasn’t initiated much yet this year. We are really going to see what this Michigan defense is made of taking on the Kavanaghs this weekend.

The Patriot League trudges on with two teams leading the way. Boston U and Army have been on a roll this season and both sit in the top-15. Loyola coming off a big win and Bucknell at 6-0 are right on their tails.

The Ivy League begins conference play this weekend, with a few big games between teams who have been rolling thus far in 2022. Cornell hosts Yale, Harvard takes on Brown and Princeton gets Penn.

Ohio State and Denver play Sunday in a midwest shootout. Both teams can put up goals, but can this Denver offense keep up with Jack Myers and the Buckeyes offense, better yet can they stop them. Ohio State’s only loss this season came against Cornell, when Myers was held to only a single goal.