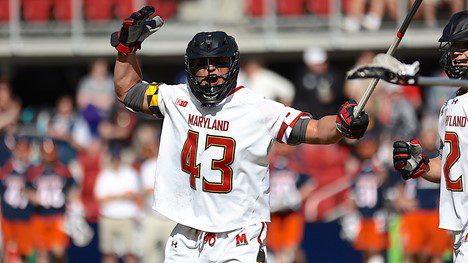 The anticipation of Saturday afternoon’s classic at Audi Field in DC overshadowed what was a great weekend on the college lacrosse slate. While I was in the Navy Yard enjoying the action Saturday afternoon, it left little time to catch any of the other games this weekend, and what a weekend to miss. Just about every Ivy League game of the weekend was a one goal game. Army and Lehigh squared off in a Patriot League barnburner. Denver and Delaware pulled off a couple of Sunday upsets, while most (cough cough Virginia) of the ACC teams got back on track with some wins this past weekend. Without further ado, here is my updated Week 6 top-20 rankings:

THE NUMBER 1 BELONGS TO MARYLAND

It was all smiles for the Terps about a half hour from campus down at Audi Field on Saturday, as they took the lead over Virginia early and never looked back, bumrushing the Hoos to the tune of 23-12. Keegan Khan, Anthony Demaio and Logan Wisnauskas led the way for the Terps offensively, while Brett Makar and Matt Rahill both added goals of their own and were able to contain Matt Moore and Shellenberger (to a degree). Both had five points (3g, 2a) but were not able to get many that mattered as the Terps had a solid lead by halftime.

Maryland has solidified itself as the clear team to beat in college lacrosse, especially as Virginia (and maybe Princeton) were the other two that are (or were) breathing down their neck. I don’t know if the Terps will lose this season.

The Princeton and Penn game had three players with at least 9 points. Sam Handley had 11 points, but it was Chris Brown who had his 6th in overtime to win it for Princeton in a solid top-5 matchup (and better game than the #1 vs #2). The Tigers keep it rolling and jump UVA this week.

Cornell kept it hot this year beating Yale 13-12. CJ Kirst led the offensive effort with four goals but it was the Cornell defense that kept them in it. Gavin Adler has been one of the best defensemen in the nation this year, and after locking Jack Myers down against Ohio State, he held Matt Brandau to just a goal and two assists. Chayse Ierlan added 18 saves to contribute to the victory. Cornell vs Penn and Yale vs Princeton next weekend. The Ivy is no slouch this year.

Harvard is 4-1 after beating Brown 12-11. They also got four goals out of Hayden Cheek and a massive performance in cage from Mullin (18 saves).

Cornell–Penn and Yale–Princeton are both going to be one goal games. Going to call it now. These are the best four teams in the Ivy League and they are going to go at it all year long. I wouldn’t be surprised if all four of them get into the tournament. Brown and Harvard are on the outside looking in but they easily have the capability to make a run in this league. Princeton right now is the cream of the crop. They have a couple solid offensive players in English and Brown. If Gavin Adler has a defensive day when Princeton takes on Cornell, I could see that being an issue.

IS THE ACC BACK?

Notre Dame took down Michigan. Duke came back in the second half to double up Towson. Syracuse won a four goal game over Stony Brook. UNC beat High Point on Sunday. The ACC slate continues this weekend as Notre Dame travels to Charlottsville and Duke heads up to the dome. In a wild turn of events, the ACC still does not seem to be the top conference this season, and conference play the rest of the year may hurt some of these teams who have to fight for an at-large bid. The ACC does not get an automatic bid to the NCAA tournament as there are only five teams, but all five should compete for an at-large and at least four should get in.

Duke has struggled lately, even in the first half against Towson before that game became the Brennan O’Neill show. Duke’s strength is their offense and Syracuse’s weakness is their defense. I am giving the slight edge in this one to the Blue Devils simply because I havent seen Cuse’s offense operate through really anyone besides Curry or Dordevic. Once they can prove that, I will put more trust into them. I think this should be a close one, and Cuse will be able to play with Duke because of the Blue Devils lack of cover guys.

Virginia is going to be looking for a bounce back in a big way, and they have just the opportunity to do so against a Notre Dame team they are able to beat. This Virginia offense is still deadly efficient and they have some major stars at all positions. I think this one is a race to 15. First to 15 wins this one. It’s the Kavanaghs against Matt Moore and Shellenberger. Get your popcorn ready.

I love how the Big Ten has carved out Sundays for their lacrosse slate. It’s a perfect cap to the weekend and puts them on the main stage in lacrosse. Too many teams playing at 12, 1 or 2pm on Saturdays can put some games on the backburner, but the Big Ten has done the opposite with their conference slate. Hopkins and Michigan are both coming off of two game losing streaks and have a late afternoon Saturday matchup. After their Cuse win, Hopkins has cooled off big time, losing to Navy at Homewood and at Delaware Sunday. Besides their 18 goal outburst at Towson, the Jays are averaging less than 10 goals a game, which simply isnt going to cut it. Brendan Grimes has been out of the lineup for some time now, and they are not deep offensively. They primarily run through Joey Epstein; stop Epstein, stop the Jays. Michigan needs a win to try to prove themselves, but this one might not prove anything. The Wolverines can put up goals, but they havent yet against a good team. Saturday is somewhat of a chance for them.

The Sunday slate rounds itself out with Rutgers–Ohio State at 2 and Penn State–Maryland at 7. Obviously, I don’t see the Nittany Lions being an issue for this Maryland team who can put up 20 goals at will. Unless Penn State’s goalie can stand on his head like he did in the Penn upset, I don’t see this being less than a seven goal Maryland win. Rutgers and Ohio State should be a fast, exciting one. I don’t think Ohio State can necessairly stop them, but I think the Buckeye offense can play with Rutgers offensively, so this one may see some fireworks.

Denver scored a top-5 win on Sunday at Ohio State. Jack Myers was held to a goal and an assist. The secret is out, stop Jack Myers, stop Ohio State. Denver isnt a national championship contender, but they will be pesky all year.

Loyola handed Bucknell their second straight loss and scored a Patriot League victory. The hero against Duke, Kevin Lindley, went 0-9 shooting and didn’t register a point. If Loyola can win without him, they sure can make some noise with him.

Nova won their battle of Philly this past weekend, beating Drexel 15-12. Luke Keating had eight points in the victory.

Unlike I thought a few weeks ago, Loyola and Army might be two of the top four Patriot League teams. They battle in Baltimore on Saturday afternoon in what should be a close game.

Lehigh and Georgetown both play another out of conference game. I am curious which Mike Sisselberger will show up. He is the catalyst to the Lehigh offense and can gift them possessions from the faceoff x, but will it be enough to hang with the Hoyas high powered offense and stifling defense?

Villanova hosts Delaware in a game of two teams that could mess around sneakily win a conference. Delaware has a legit shot to win the CAA, but with Georgetown and Denver, Nova is going to be less of a problem there. The canadian influence on the Delaware offense is fun to watch.

The first big weekend of conference action is among us. Next week’s article is going to breakdown each conference race with a prediction of each conference winner at this time. This is one of the best times of the year, as we get to compare how teams did against each other’s opponents. We get to watch all the conferences unfold from now until late April.