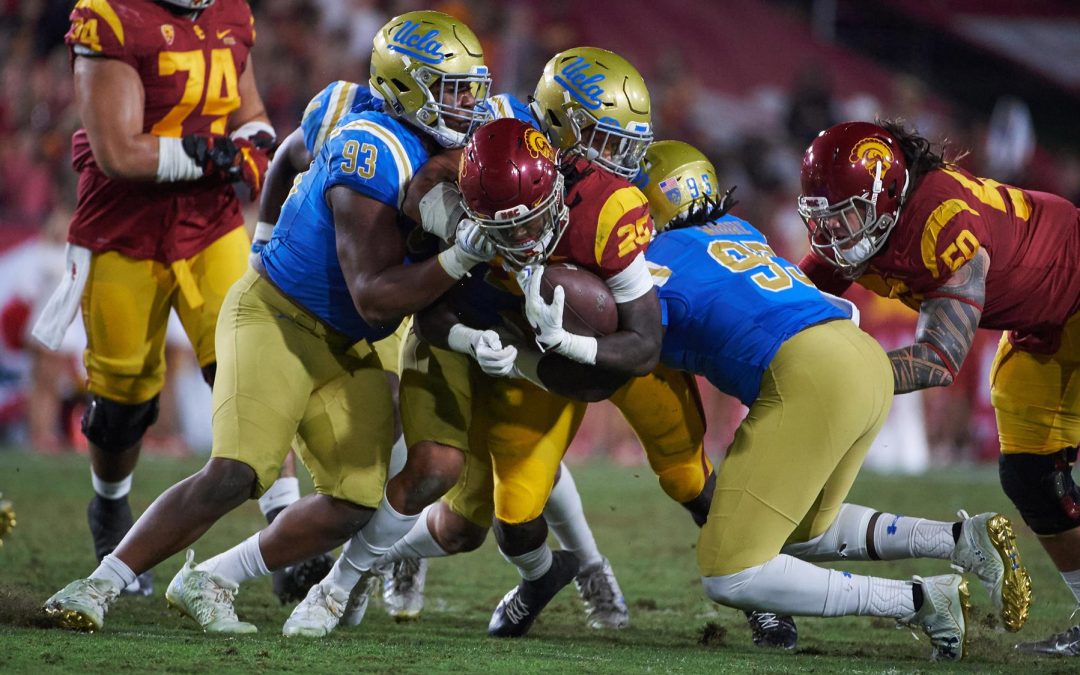 It was exactly 11 months ago today that Texas and Oklahoma accepted invitations to join the SEC no later than 2025. That triggered movement downstream that saw the Big 12 add four schools previously among the Group of Five, followed by some more shuffling among the Group of Five conferences. By the time it was over, 20 schools had agreed to switch conference affiliations over the next several years. It also had the feeling that for at least a couple more years, conference realignment would go on hiatus.

As Lee Corso would say, “not so fast, my friend.” Word got out today that USC and UCLA plan to ditch the Pac-12 for the Big Ten. While nothing is official yet, this has all the feeling of a done deal. The two would join in time for the 2024 football season, which is right after the Pac-12’s current TV rights deal ends, and is typically when member schools become “free agents” and pursue greener pastures. As shocking as this move seems, the seeds were planted for it to happen a decade ago.

The current Pac-12 TV rights deal began in 2012. At the time it looked good, as the conference was set to receive $3 billion over 12 years from ESPN and FOX. But as the years wore on, the deal got worse and worse. When it comes to selling live sports properties, it is typically more advantageous to the seller to have your product on the open market as frequently as possible. As one of the last television products that people prefer to consume live, the rate broadcasters are willing to pay for live sporting events continues to grow exponentially, so the sooner you can renegotiate your deal, the better. The 12 years the Pac-12 has had to wait have only seen it fall farther and farther behind conferences that negotiated shorter deals (namely the Big Ten). Then there are the Pac-12 Networks, the fully conference-owned venture that had rights to all conference sporting events ESPN or FOX did not have as part of their agreement. The network has been a failure, as not choosing to partner in the venture with another broadcaster (like the Big Ten did with FOX and the SEC and ACC did with ESPN), has led to very poor distribution on cable and satellite services, and hence very poor revenues for the schools.

As you would expect, the Pac-12 has fallen way behind the Big Ten and SEC in the amount of money it sends to its schools, and is even facing challenges to keep up with the ACC and Big 12, though much of that is a result of the impact of COVID and the Pac-12’s decision to play a very short football season in 2020. As this graphic illustrates, things are not expected to get better.

So it makes sense that USC and UCLA, easily the two most valuable schools in the Pac-12, would want to secure their futures by finding greener pastures. And since they each have a blue blood program in each of the two revenue sports (football for USC, men’s basketball for UCLA) and are located in the #2 media market in the country, they both certainly appeal to the Big Ten, who is putting the finishing touches on its own future TV rights deal and no doubt would get a big boost from the LA schools.

So assuming this happens, what comes next? A move this big always has ripple effects, like last year. First, I think the other Pac-12 schools are in scramble mode right now. Their next TV deal was hugely important, and still not expected to put them in a league with the Big Ten and SEC. Without the LA schools, they will probably fall further behind even the ACC and Big 12. I would be shocked if schools like Oregon and Washington have not already called the Big Ten to pitch the idea of a West Coast Division. Both of those schools, while not quite USC/UCLA, could be solid additions for the Big Ten. Each has a football program that has appeared in the College Football Playoff, the only Pac-12 teams to have ever done so. Washington brings a good sized media market in Seattle. Oregon is smaller in market size, but has a well-established brand thanks to its Nike ties.

How far would the Big Ten be willing to go in its West Coast expansion? USC and UCLA are slam dunks. Oregon and Washington make sense. What about Cal and Stanford? Both are the primary Division 1 schools in a major media market, both are elite academic institutions (the Big Ten likes that), and both have solid overall athletic programs. The problem is neither of them move the needle in the sports that matter, football and men’s basketball. They might bring in less money for the conference than they would be taking back in their share of revenues, meaning they’d be eating into every other school’s share. Adding Cal and Stanford could be a very tough sell for the Big Ten members. I would give it a less than 50-50 chance, though greater than zero.

The remaining six members probably have little appeal for the Big Ten. I think Arizona, Arizona State, Colorado and Utah could be a good fit for the Big 12. How ironic; after Texas and Oklahoma announced they were leaving the Big 12, the Pac-12 briefly, and quietly, considered whether or not it was worth poaching any of the remaining Big 12 schools. They obviously decided it wasn’t. Now the shoe is clearly on the other foot. Oregon State and Washington State would appear to be in the toughest spot here. They hold no appeal to a Power Five conference. If the other Pac-12 schools jump ship, they’re really in a bind. Maybe the Mountain West Conference would welcome them in, but even that would come with a major drop in revenues that would devastate their athletics programs. I’d least want to be in their shoes right now.

So what does this mean for the ACC? This has no impact on the grant-of-rights agreement, which essentially assures that any school that leaves would have to sacrifice its conference shared revenue in their new home, thus eliminating any appeal to go. Their current deal with ESPN, and it’s exclusively with ESPN, runs through 2036. What I said earlier about the Pac-12 and the length of its TV deal applies here too. The ACC’s TV revenues already aren’t great; and being locked-in for the next 14 years, it is only going to get worse. Could a school try to challenge that the grant-of-rights violates antitrust law in the courts? Yes, and I think they’d have a strong case. The problem is, going through the courts would be a very long, very expensive, and very acrimonious process. And though I think the case is strong, nothing is guaranteed. I don’t think that’s the route you want to take.

There is one thing the ACC could do that would trigger a renegotiation in the TV deal much sooner: expansion. If there was ever a time for them to coerce Notre Dame into joining for football, this is it. I think the Irish would agree that playing football in the ACC worked well for them when they did it in 2020. Maybe with the era of the super-conference apparently dawning upon us, they believe it’s time to find a football home. Could the ACC also look to add a couple of Pac-12 schools and cover both coasts? Maybe. At this point, I would caution against ruling anything out. Crazy times!