Could/Should The Orioles Have Made Shields Swap? 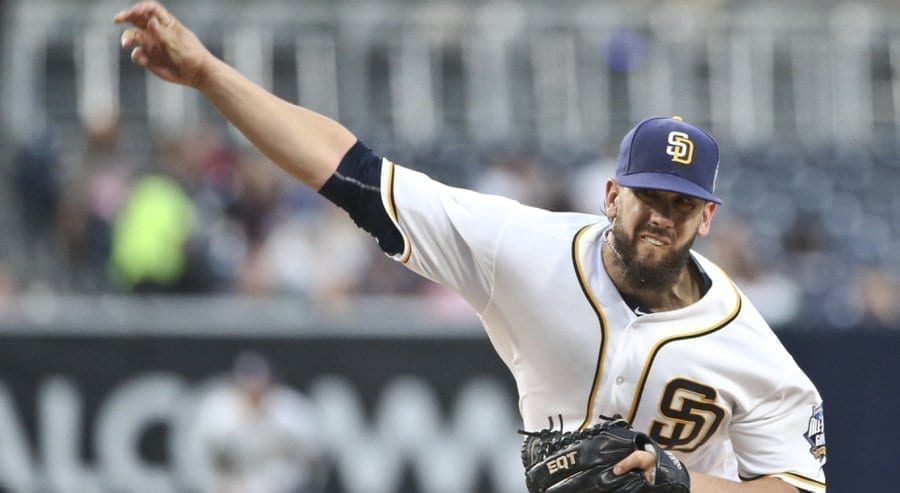 A major pitching chip was cashed in as the San Diego Padres flipped James Shields — and potentially somewhere around $30 million — to the Chicago White Sox for pitcher Erik Johnson and prospect infielder Fernando Tatis Jr.

Shields has been talked about frequently in articles and on the boards here, and it’s worth wondering if that’s the kind of deal the Orioles could and should have struck.

The the “could have” point, it sure seems likely. Johnson is a righty with fringy stuff and a home run problem that the Padres are hoping Petco Park can clean up. At 26, he’s a low-yield lottery ticket who at best could carve out a nice role in the back-end of the Padres bullpen. Most teams have a number of players like this somewhere in their farm, but to me this sounds a lot like a spot to move Dylan Bundy. You can argue about whether or not it’s worth it, but it’s hard to argue that Bundy has been more than “meh” in the Orioles bullpen so far this season.

Tatis hasn’t yet played stateside after signing with the White Sox as a July 2 prospect last year from the Dominican Republic. Tatis was named No. 30 on MLB.com’s top-30 players available last summer for that signing period, and according to Eric Longenhagen of Fangraphs has seen his stock take on some helium this spring. “(Tatis) has blown up a bit this spring,” Longenhagen said recently. “He is one of the more interesting bats in Extended Spring Training.”

(Chat about this on the BSL boards here!)

But whether you’re banking on new-found changes to Tatis being legitimate or not, you’re still talking about a guy who is 4-6 years away from contributing, and risky at that. I couldn’t single out a specific prospect per se from the Orioles system, but I remain steadfast in my belief that the Orioles could come close to that level of prospect. Even if not, you could then see a tweaking of the money coming over from the Padres in the deal.

In short, I don’t think it would have been too hard for the Padres to forge a deal here had they been willing. So check the box next to “could.”

But don’t check the box next to should.

In an ideal world, Shields comes over to wherever he’s going and pitches well. Is that a guarantee or even likely? Maybe not; for one he’s 34 years old and secondly he’s about a year-and-a-half removed from being particularly good. It’s also of concern that Shields went to Petco Park — notoriously one of the more offensive and home run suppressive parks in all of baseball — and his home run rates blew back up to his shakier Rays days. The move from Petco, which has home run factors of 102-102 (LHB/RHB, over 100 favors hitters), to US Cellular (113/113) has disaster potential written all over it, and that’s before considering that the San Diego number you see this year is way up from where it has been in recent years. Last year it was 111/100, but the year before it was 97-81. I don’t really have a good answer for why that is — the fences came in, but that was for the 2013 season — but either way I don’t see Petco -> US Cellular as even a lateral move, let alone a positive one.

Working with vaunted pitching coach Don Cooper may help, but you’re still talking about a risky proposition. For a point of reference, the park factors for home runs at Camden Yards are 122-111 this year — even more reason to not want Shields to join the club.

But anyway back to the point at hand: if you’re a team that acquires Shields, you’re ostensibly doing so hoping he’ll pitch well enough to opt out. He can do so after this season and leave $44 million on the table (two $21 million salaries and a $2 million buyout for 2019). Or he can pitch poorly and opt back in, leaving the Padres and White Sox on the hook for that much cash. With Stephen Strasburg inked long-term in Washington, there’s a decent chance Shields would hit the market again as probably one of the best pitchers in a starved market. He might not be able to replicate the $42m/2 he’d be owed in the deal, but if he could guarantee $60m/4, that’s a good gamble for him. I’ve been told by numerous baseball types that players will often look for guaranteed years more than money, as long as the money is still very good and at least comparable to what was previously in play.

So in that case you’re trading for a rental, but you’re assuming all the downside. You can’t extend a qualifying offer, and you’re banking that he will pitch well enough to opt out, because if he doesn’t, you’re doubling down on a) moving assets to acquire him and b) having to commit to a worse pitcher for a longer period. That’s offset by the amount of money that *could* be sent to complete this trade — reportedly somewhere between $27 and $31 million — but in the end you’re then still stuck with paying $10 million to a guy that hasn’t been all that great lately.

And if he stinks in 2016, what are the odds he “finds it” in 2017 or ‘18? Suddenly you’ve become the Sanford and Son of overpaid, iffy pitchers with Shields and Yovani Gallardo, though fortunately the latter is signed just through 2017 with an ‘18 option. Ultimately, I just don’t see enough upside to bringing in Shields that would have made sense for the Orioles are really any price, let alone two even moderately interesting trade chips like the White Sox sacrificed. Maybe Cooper can turn him around, and I’m certainly not saying he’s completely fried, but it’s not a gamble I’d be taking.

Here’s a look at how the Orioles fared in May in a number of statistical measures: