D.C. United & Dave Johnson – back at their original TV home 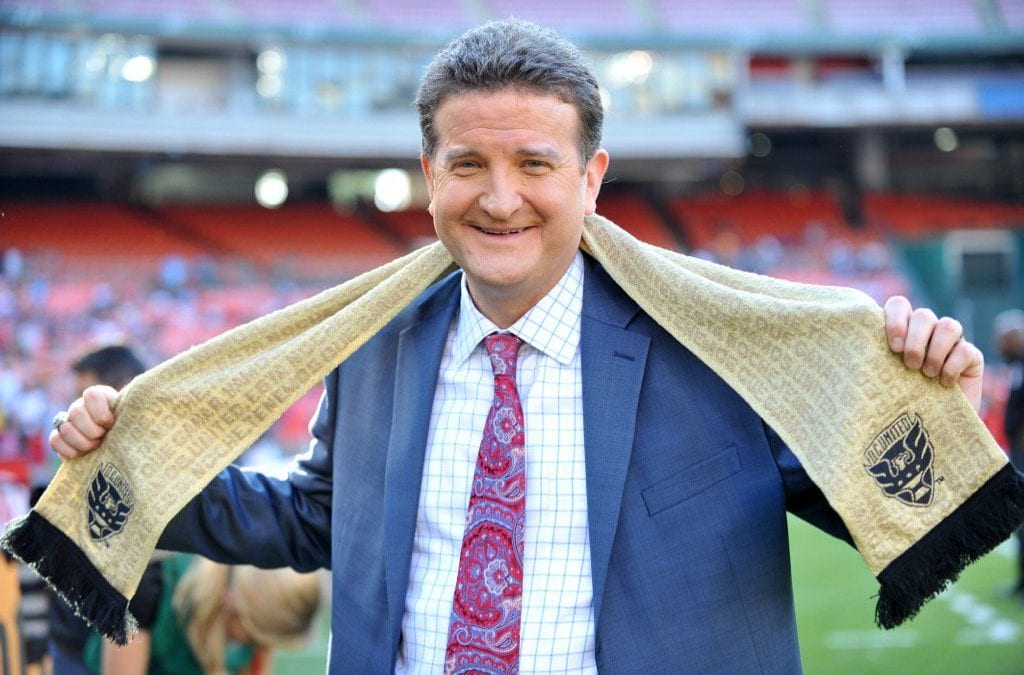 Dave Johnson and D.C. United’s TV home are back where it all started – NBC Sports Washington (NBCSWA).

Johnson, the only play-by-play voice that the club has ever known during its 25-year history, began his tenure with the team’s coverage on NBCSWA’s predecessor, Home Team Sports (HTS). That network later became Comcast SportsNet (CSN) and carried the club’s local match broadcasts through the 2015 season. For 2016-2018, the club brought its TV coverage in-house and games were shown on Newschannel 8 and other Sinclair over-the-air affiliates. In 2019, the club became the first in MLS to go to a streaming-only option with FloSports. Last season, the club’s games were back on Newschannel 8.

With the move, United fans may no longer need to consult the club’s TV schedule – 33 of its 34 matches will be carried locally on NBCSWA. One match, vs. Atlanta United FC on September 18, will be televised nationally by Univision. Additionally, for the first time, games will be broadcast locally with Spanish-language commentary on TeleXitos, Telemundo’s multicast network.

For Johnson, who started at HTS in 1991, going back to NBCSWA has extra meaning. “It’s always been the channel in this area to go to for sports. When it started up, it made history – a channel in this area dedicated to our local sports teams. It’s very special to me and will always feel like home. It’s still the place for sports in this area for me,” said Johnson in a telephone interview earlier this week.

Starting with this Saturday night’s home opener vs. NYCFC, Johnson will be back in the midfield broadcast booth at Audi Field. Joining him for the 5th season will be analyst and former D.C. United defender Devon McTavish.

Johnson is also excited to see fans back in attendance at Audi Field. The club was initially granted approval by the District to admit up to 10% of capacity or 2,000 fans. Within the past week, that limit was doubled to more than 25% of the venue’s 19,000 seating capacity. Due to strict Covid restrictions last season, Johnson called both home and away matches from the broadcast booth inside an empty Audi Field.

Road matches were called off of monitors as the broadcast booth was transformed into a broadcast studio. “They were incredibly resourceful to make it happen. In some ways, it was indeed strange though to walk into the stadium and expect to see a crowd but not see any,” Johnson added.

Calling games remotely off of monitors is something that Johnson had experience in long before Covid. He first called soccer matches remotely during the 2006 World Cup for XM Satellite Radio. Although he was in Germany, the host nation, limited space at venues resulted in him having to call 14 out of 24 matches remotely in a studio there.

Johnson, who has also served as the longtime radio voice of the Washington Wizards, has encountered a similar setup this season at the Capital One Arena. For home games, the broadcast position has been on the club level in section 216. “It’s a great vantage point to call a game from. The only difference is that there are no fans; they are sorely missed ,” said Johnson. Road games have been called from inside the arena in a studio type setup featuring multiple monitors in front of him. Johnson remarked that it has been “amazing to see how much they have done to make it successful to call a game there.”

On the Wizards radio side, Johnson has continued to embrace the #RadioParty community format on Twitter which has taken on even more importance during the on-going fan displacement. “The connection is needed now, more than ever. I can recall some tweets on how people have said they have needed a sense of community more than before. Overall, it’s been a safe excuse to have a community back together,” said Johnson.

Just five years from now, the United States is set to host the World Cup, with both Baltimore (M&T Bank Stadium) and Washington, DC (FedEx Field) among the finalists for host venues. The last time the nation hosted the event in 1994, Johnson served as the public address announcer for the games held at RFK Stadium. He also covered the event for a weekly soccer show on HTS that he had started in 1992.

“At the time, we were the only weekly Live soccer show on TV. Since it was the time of satellite TV, we would get reactions from all over the country. We once gave out a prize – a US Soccer jersey – and had bags of mail in the studio, more than an Orioles trip to Iceland prize giveaway at the time,” said Johnson.

For content, the show scrapped together whatever it could. “There was no MLS at the time. We used whatever highlights we could get – not sure some of it was even legal to use at the time,” Johnson said.

Dave credited the show’s DC location with some of its early success. “We had access to national team people when they would pass through the area. Bruce Arena was a fan of the show and would call in, would travel up to appear on the show too. We also had Alexei Lalas and his rock band in the studio. His mom lived in DC and we had her on when he went to play in Italy.”

Another example of the show benefiting from being in the nation’s capital was during an early series called “24 in ‘94” in which it enlisted help from the embassies. “The show was not just about soccer, but about the culture – I recall having Bolivian dancers in the studio. Whatever we could do to promote the game. We had a blank canvas and did it for 5 years.”

Dave’s ability to transform a blank canvas into art for a soccer audience was evident even before HTS. While working with the Maryland Bays in 1988, he asked the team owner if he would cover Dave’s travel costs to Miami in exchange for getting the game air time on a local radio station. The owner agreed. What happened from there, and more specifically on gameday in South Florida, was a premonition of the dedication that capital area sports fans have come to know as they can fall asleep to Dave calling a Wizards game and then wake-up hours later to hear him deliver the highlights Live on WTOP-FM where he serves as the Sports Director.

“I went to a religious station in Towson which charged $250 for the air time of 2 hours. On the day of the playoff game, driving to Lockhardt Stadium, there were charcoal black clouds. The game was supposed to start at 7:00 and it’s still raining. So I go on the air at 7:00 and it’s just me, and I was just literally grabbing people as they went by – ushers, vendors, fans. It’s a religious station, so there are no commercials. I grabbed a guy who had a local soccer newsletter. I talked straight for an hour before the game even started. The game took 4 hours and I don’t think I’ve been so tired after a game since. The station took pity on me, didn’t charge me any extra,” said Johnson.

Friday night, Dave will be in section 216 calling the Wizards game as they return home to face the New Orleans Pelicans. Less than 24 hours later, he’ll return to Audi Field to call United’s opening match vs. NYCFC.