D.C. United is back on TV in Baltimore, and they’re worth watching 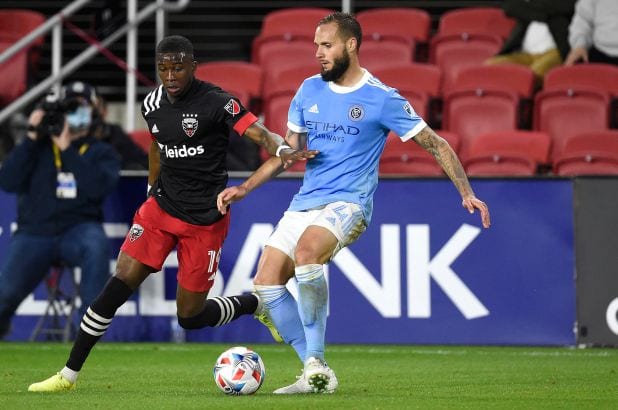 If you live in Baltimore and were flipping around between commercial breaks of the Oriole game on Saturday night, you may have come across something you haven’t seen on your TV in a while: A locally produced D.C. United broadcast.

With Major League Soccer opening its 26th season over the weekend, D.C. telecasts returned to NBC Sports Washington, the network that also shows Washington Wizards and Washington Capitals games, after a five-year absence.

And it may be just in time, as new manager Hernan Losada installs a style that may make the Black-and-Red a more appealing watch than they’ve been in a long time.

To watch Saturday’s opener was — franky — a shock to the system.

It wasn’t merely that D.C. defeated New York City FC. 2-1 as sizable home underdogs. It was the aggression they unleashed, a frenetic, 90-Minutes-of-Hell approach to the game, to adapt a term that once applied to John Thompson’s preferred full-court press with Georgetown hoops.

None of this was necessarily a surprise. Losada came to D.C. with a reputation for a frenetic approach. Beerschodt, the team he departed in the Belgian top flight, finished its regular season having scored 58 goals and conceding 64. That’s an average of roughly 3.56 total goals per game, nearly a goal above the global average and tied for the highest average in Belgium.

Even so, to see that manifest with a club that often resorted to less than aesthetic play during the previous decade under Ben Olsen was enthralling. This isn’t a shot at Olsen, who had justifiable reasons for his tactics. And they worked for long stretches of his tenure, in which he was tasked with helping the Black-and-Red punch above their weight. But there was an undeniable energy around the pitch that hasn’t been felt consistently in a long, long time.

Don’t be mistaken though. The new D.C. is not a return to its early title winning sides. If that pass-and-move team played as though soccer were Classical symphony at the Meyerhoff, this one approaches the game as pulsating rave, the kind you might tucked down an alleyway off Howard Street at 3 a.m. There’s flashing lights, a pounding beat and bass you can barely think over, and a consistent sense that the whole party could unravel into chaos at any moment. After all, D.C. completed only 58% of their passes Saturday. At the end of the night, you’re sweaty and exhausted and just hoping the coach check didn’t lose your jacket. But you’re thoroughly glad you stayed out late.

Aside from that new-age playing style, there’s also the broadcast itself.

Dave Johnson still mans the play-by-play mic, as he has since the team played its first match in 1996. Of all the major pro sports teams in the Baltimore-Washington region, only the Capitals have enjoyed a longer relationship with their lead voice.

Even including color analysts, Johnson is as much a D.C. United institution as Jim Palmer is for Orioles broadcasts. For area soccer fans, he may be even more important, having given the sport serious treatment before anyone else, beginning with his “Soccer 94” talk show on Home Team Sports prior to MLS launching.

And D.C. will only have one game on national television in 2021. So even if you missed the opener, you have 32 more chances to hear Johnson’s trademark “It’s in the net! It’s in the net” call on a Black-and-Red goal.

Lastly, United games are back on local TV when viewers who don’t stream are suddenly finding themselves with fewer options.

Only a couple years ago you could follow the UEFA Champions League on Turner stations. Now you need Paramount Plus. The NBC Sports Network — host of most American Premier League coverage — is also going off the air soon. Some matches will be transferred to network NBC or USA Network, but more will find their way to Peacock, the NBC’s streaming service.

D.C. United may not be a true hometown team, and Baltimore should still push hard for a USL club of its own. And there’s nothing inherently wrong with streaming platforms when many folks — especially younger folks — are cutting the cord.

But in a soccer-literate place like Charm City, any move that makes the beautiful game more accessible should be applauded. And as intriguing and different as this D.C. team might be, the least Baltimore can do to show its appreciation is tune in.