My Dad and Sports 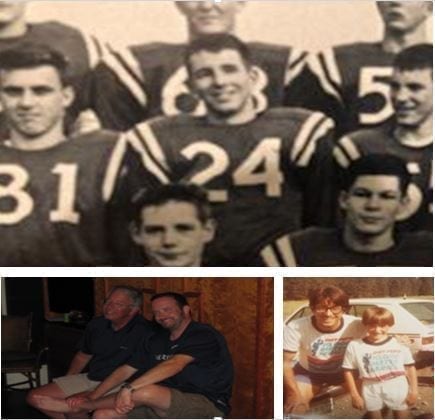 Cancer is an odd thing. Even when you think you’ve got it beat, you can never really be sure.

I know people who have fought it off for years, going through round after round of chemo, beating the nasty thing back time after time and carrying on with life. I also lost a robust, active, healthy cousin to the disease when he was in his early 30s. You just never know.

Last month I lost my father, Tim, to cancer at the age of 72. This was his second go-round with the disease — it was about four years ago he had his cancerous bladder removed. Given the positive tests that followed, not to mention his incredible personal strength, both physical and mental, everyone remained positive when the disease showed up again this past winter.

And maybe my Dad would have beaten cancer again if it had remained a one-on-one situation and more of a fair fight. But this time, just as the cancer was stubbornly resisting the effects of chemotherapy, an infection joined the fight. That one-two punch proved to be too much for even my dad to handle.

If there was a silver lining to all of this, it’s that Dad tested negative for COVID-19. So when the doctors made it clear that hospice was the only option left, Dad was able to do so at his home in Spokane, Wash., to be with Mom and his five children in his final days. That at least won us an extra week with him, to share stories, to thank him and to tell him we love him, before he died on April 14.

I know this is a sports website and you’re probably wondering where this is all going. Thank you for indulging me. I promise that sports plays a prominent role in this story.

Over the past few weeks I’ve been talking to a lot of people about my Dad, getting a feel for what kind of person he was. As a son, I have my own perspective, but it’s always nice to hear the viewpoint of people who knew him well before I entered the picture, and it’s comforting when their impressions more or less match up with mine.

Sports was a big part of my Dad’s life from his early days growing up in Tacoma, Wash. It was a big part of the Harkins culture, actually, thanks to my grandfather Joe. Grandpa loved sports and pushed all eight of his kids to participate. He put the balls in their hands. He sent them to the public swimming pool at Titlow Park, or to the tennis courts at nearby University of Puget Sound. He signed them up for teams, and he coached many of those teams himself. He not only taught them how to play, but how to handle themselves. To work hard, to give it their best, and to treat their opponents with respect.

There was one story in particular that illustrated this point and it came when my dad was in sixth grade, playing basketball for St. Patrick Catholic School. It was a good team, and my grandpa was the coach. After the games, usually a victory, the players would cheer for the opponent. You know how it goes: “2-4-6-8, who do we appreciate?” Then you say the name of the other team, cheer, and go shake hands.

After one St. Pat’s victory, someone on the team, full of sixth-grade cockiness and creativity, thought it would be funny to alter the cheer to “2-4-6-9, better luck next time.”

That didn’t sit well with Grandpa, who resigned on the spot.

“I mean we were sixth graders,” said Joe Staeheli, a lifelong friend of my dad’s and member of that team. “It didn’t seem like it was gonna be that big a deal, but it turned out to be a pretty big deal. Your grandpa said ‘you guys, I’m through with you. I’m through with you.’ We all had our tails between our legs as we left the gym.”

It took a hand-written apology from all of the players to coax him back.

“Mr. Harkins, and we always called him Mr. Harkins, he squished us pretty good,” Staeheli said. “But he came back and coached us. But we all learned, there isn’t any of us that don’t remember that, you know? How to be good sportsmanship. Once a game is over, it’s over. You don’t rub it in someone’s face.”

My Dad was a very good athlete, if not a great one. His friends remember him being fast and skilled, and I for one can attest to his raw strength, having personally witnessed his mammoth drives on the golf course, which were impressive for their power even though the ball, if he could find it, often wound up on the adjacent fairway.

At Bellarmine Prep, he lettered in football and baseball, and would have added basketball to that list if not for his refusal to play for the coach, who he felt had treated him unfairly during his junior year.

“I liked to think of myself as I’m good at every sport but not great at any of them,” said Bill Leedom, a longtime friend and classmate of my dad’s. “Tim was better than I was at all the ones he played.”

Dad tended to be a starter on the teams he played on, but was never an All-Star, and his stories tended to revolve around the better players he faced rather than his own exploits. He used to recall trying to bring down Donnie Moore, the brilliant running back for Lincoln High who would be compared to Earl Campbell due to his strength and speed. Dad would laugh at the memory, recalling taking the perfect angle from his safety position, intent on either knocking Moore out of bounds or bringing him down, only to look up from the ground after Moore had run through his hit on the way to the end zone.

The humor and humility were always present in these stories, and you can see how it made him popular in high school.

“Some people kind of get the egotistical attitude about their athletic abilities, I think that certainly was never an issue around him,” said my Uncle Vern, who was two years behind my dad in school. “(He was) just a very skilled, very strong, competitive, determined athlete who wanted to perform at his best. And he probably had good respect from the other kids that he would’ve been playing with.”

Dad’s personality carried him through to Gonzaga University — where he met my mom – then into the business world, and back to Gonzaga for law school. He would go on to build a solid career as a lawyer, running his own private practice for more than 30 years, and would grow his business primarily through referrals and word of mouth. He still had a healthy client list at the time of his passing.

Sports continued to be a common thread throughout Dad’s life. I remember watching him play fast-pitch rec league softball, cranking a deep fly into the trees and racing around the bases — in corduroys, mind you — for a home run. He got caught up in the jogging craze in the late 70s, helped along by the incredible popularity of Spokane’s Bloomsday Run, and would eventually run a marathon.

He played basketball into his 50s, and teamed with my brother Paul and a couple of his mid-20s friends to win a 3-on-3 tournament. Dad was 54 at the time and I remember at one point going to slap his back and congratulate him after a brief-but-physical run, only to have him fend me off and gasp, “Air! I need air!”

The athleticism and toughness, as well as the humility and humor were always there.

As a fan, Dad tended to follow Seattle’s sports teams — Seahawks, Mariners and Sonics – since Spokane doesn’t have any big-time pro leagues. One time, when Dad took me to Seattle to prep for another year at college, we took in a Mariners-Red Sox game at the Kingdome. Roger Clemens was pitching for Boston and there wasn’t much going on, so we went to get hot dogs. That’s how we missed Edgar Martinez’s home run, one of just four Seattle hits in the game.

Dad’s biggest passion as a fan, though, was Gonzaga basketball. He was a season ticket holder for more than 30 years and would annually pick them to finish atop his NCAA bracket, well before it was cool to do so. He loved his Zags so much he would even go watch their informal offseason scrimmages. Then during our next phone call I, a University of Washington graduate and fan, would get to hear about how great they looked, and how another loss was coming for my Huskies. He was almost always right.

He followed my career and always asked about the stories or topics I had written about, the great players, the great teams and the not so great ones, too. After Dad died, I was touched to find out that he had printed out my articles dating back to 2005 and kept them in a file at his office. I knew he was proud, but that one caught me by surprise.

Like Grandpa did with him, Dad put the ball in our hands when we were kids and encouraged us to compete. He coached all five of us kids at one point or another, and taught us the same things his father taught him – how to be competitive and determined, to work hard, and carry yourself with a humble confidence, to treat people with respect no matter who they were or where they came from. And he did most of this without actually saying it. He didn’t preach. You just learned by being with him.

It turned out that this was a lifelong pattern.

“He was just somebody you wanted to be around,” said David Hughes, another high school friend who split quarterback duties with dad when they were high school seniors. “I would say he was one of the real popular guys. Not in a popular cool guy sense but in the sense that everybody respected him and everybody liked him and they liked being around him. He was just a good guy, a good influence. Anyhow, I always liked Tim, everything about him. Never had a bad word said between us. He was just one of the really, really good guys.”

That’s a most underrated compliment, in my book. My Dad was a really good guy. A really good athlete. A really good father. A really good man. We’d be better off if there were more people like him. Now it’s up to the rest of us to live up to the standard he set, and to pass it on to our children. And if we can come close, we can help cement for my dad something else that has been really good — his legacy.

Author’s note: Season 3 of my documentary podcast Razed Sports will be a mini-series that focuses on my father. Please check it out when it comes out later this summer. I’d also like to encourage you to donate to the Dominic Fouts Memorial Cancer Fund, which supports people fighting cancer. Thank you.