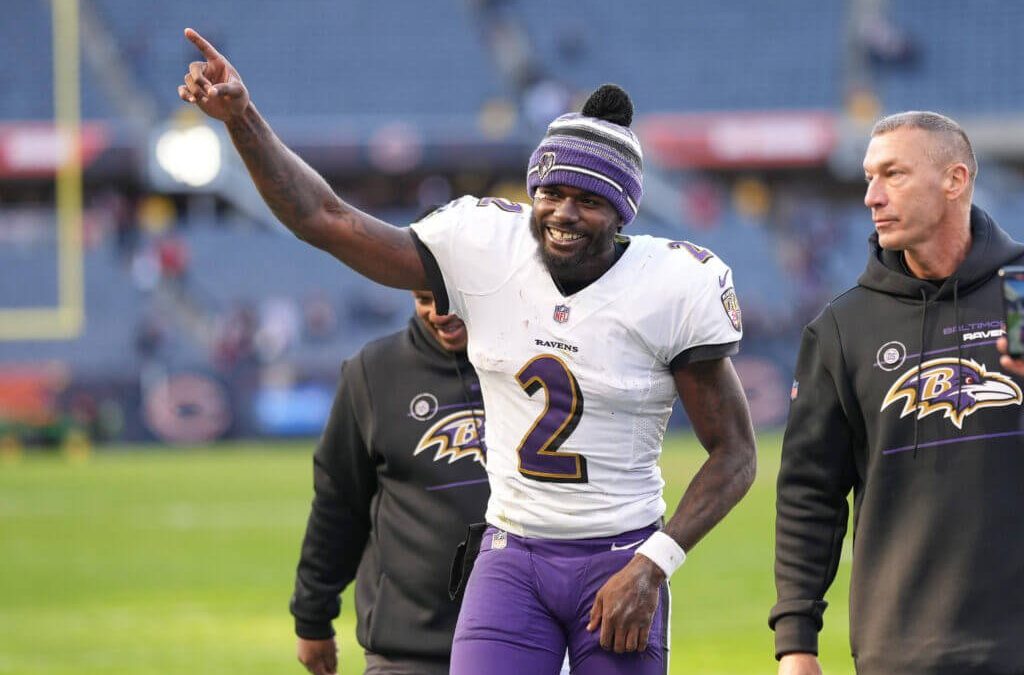 From the outset, the Baltimore Ravens’ matchup with the Chicago Bears seemed highly precarious. Quarterback Lamar Jackson, among the MVP front-runners at the season’s midway point, missed practice most of the week with a non-COVID illness and didn’t recover in time to suit up in Chicago. Meanwhile, the offense would have to make do without lead receiver Marquise “Hollywood” Brown. All of which put Tyler Huntley, a former undrafted free agent starting his first NFL game, behind the eight ball.

None of which boded well for the Ravens when Bears signal-caller Andy Dalton connected with wide receiver Marquise Goodwin for a 49-yard score on fourth-and-11 during the waning minutes of regulation. The touchdown put Chicago ahead 13-9, a seemingly insurmountable lead given Baltimore’s game-long offensive struggles without Jackson. CBS’s cameras caught both Bears players and team owner Virginia McCaskey celebrating as though the contest had ended.

But with 1:33 remaining, the Ravens showed their mettle. On the first play of their final possession, Rashod Bateman drew a flag for defensive pass interference, setting up the offense past midfield. Huntley connected with Devin Duverney Jr. on the following play for an explosive gain along the right sideline, leaving Baltimore just 30 yards from pay dirt. Sammy Watkins set up the unit inside the 5-yard line a few plays later, leaving Devonta Freeman to punch in the winning touchdown with 22 seconds to spare.

Despite an unfavorable situation with an undermanned roster, the Ravens pulled out the victory, improving their overall record to 7-3, adding needed distance between them and the Cincinnati Bengals in the AFC North title race.

But while the narrative surrounding the game understandably focused on the gritty performance of multiple role players and backups, it also affirmed an increasingly apparent notion about the Ravens. Even with injuries decimating the roster and a difficult schedule remaining, the 2021 season represents the Ravens’ best shot at a championship for the foreseeable future.

The context for that claim lies as much in non-football considerations as what happens on the field. Jackson, the Ravens’ centerpiece and one of the NFL’s premier players at any position, has just one year left on his rookie contract and will almost certainly sign a lucrative extension in the coming months. That deal won’t prohibit Baltimore from remaining competitive — five of the last seven Super Bowl winners featured a quarterback on an expensive contract — but the margin for error will shrink considerably given the cap restraints Jackson’s payday will create.

But more than the pure financials, the Ravens have no clear roadblock in front of them within the conference. The 8-2 Tennessee Titans lost All-Pro running back Derrick Henry to a broken foot on Halloween and will have a difficult time maintaining their slight lead in the AFC playoff standings. Even before Henry went down, the Titans ranked outside the top half of the league in Football Outsiders’ DVOA, a signal that a strong regression would hit them at some point.

Outside of Tennessee, only the Kansas City Chiefs and New England Patriots have comparable records to the Ravens. Both pose significant threats to Baltimore’s championship aspirations, but neither has an easier path to the Super Bowl. The Patriots have rookie Mac Jones under center, and while he has played well in recent weeks, inexperienced quarterbacks typically come apart in the postseason. Meanwhile, the Chiefs already fell to the Ravens in Week 2 and will need some help to avoid another trip to M&T Bank Stadium should the two teams see face off again in January.

As for the AFC North, only the Cincinnati Bengals seem to offer a meaningful challenge to Baltimore, mostly due to the head-to-head win from Week 7. The rest of the group features a Cleveland Browns team with a broken quarterback and no clear path to offensive improvement and a Pittsburgh Steelers squad saddled with the corpse of Ben Roethlisberger. The Ravens can’t simply cruise to a division crown, but they hold the inside track.

Perhaps the Buffalo Bills will fight their way back into the conversation. The team, currently ranked second in the conference by DVOA, fell to the final wild-card spot in the standings after suffering their second terrible defeat in three weeks, a 41-15 dismantling at the hands of the Indianapolis Colts. The Bills still possess the talent to make a legitimate title run, but they have made their path considerably more difficult.

All of which underscores the opportunity in front of the Ravens. They’ve absorbed multiple significant blows and still have major issues to resolve on both sides of the ball, but the conference doesn’t have an obviously superior squad. If Jackson can return to health and the rest of the roster can hold steady, Baltimore has no excuse not to break through and reach the Super Bowl.

If not now, when?