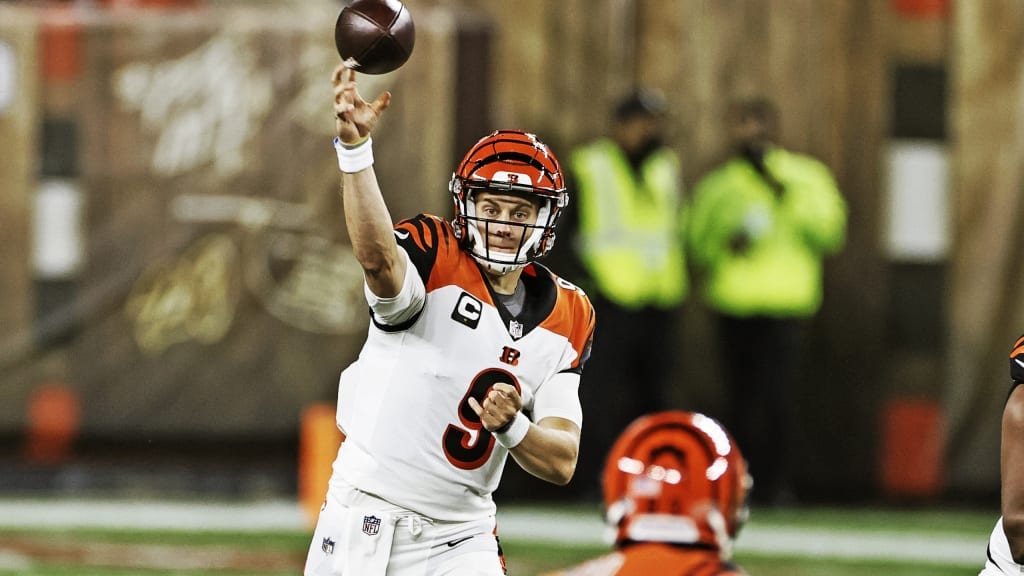 Joe Burrow is supposed to be the Bengals savior. Just like Carson Palmer was supposed to be the savior when he was drafted No. 1 overall in 2003. And Akikli Smith in 1999, David Klingler in 1992, and even Greg Cook in 1969. All were quarterbacks drafted in the first round, just like Burrow, and none of them brought Cincinnati a Super Bowl. Most failed rather spectacularly.

Klingler and Smith and Cook, for the most part, were busts. Palmer was a Pro Bowler but didn’t exactly lead Cincinnati to long-lasting prominence. Perhaps Burrow is different. After all, this is what receiver A.J. Green proclaimed after the Bengals narrowly lost to the Chargers in Week 1.

“It’s unbelievable,” Green said, referring to Burrow’s late-game poise. “That guy don’t flinch. The way he handled himself on that last drive was unbelievable … We have a special one in Joe.”

On Thursday night, Burrow got his second chance, and this time he shone in the national spotlight. Burrow was facing a Browns squad that got shellacked by the Ravens in Week 1, but it was soon evident that the performance by Cleveland’s Nick Chubb and Baker Mayfield was going to overshadow anything Burrow did on Thursday. The 35-30 Browns victory notwithstanding, it’s worth taking a look at Burrow’s performance.

His quarterback line (37 of 61 for 316 yards and three touchdowns) was impressive. But his nuance at such a young age and without a proper preseason because of the pandemic is just as noteworthy.

-On the team’s first drive early in the first quarter, Burrow, facing a third-and-six, grabbed the shotgun snap, took three steps back, and, with the pocket collapsing around him almost immediately, Burrow shot through a hole on the left side of the center and juked B.J. Goodson to gain seven yards and the first down. It was that poise Green had talked about four days earlier.

-Down 14-3, Burrow threw a pretty touchdown to mark the first passing score of his career. His throw to tight end C.J. Uzomah fit perfectly over cornerback Terrance Mitchell’s head and landed in Uzomah’s hands just before safety Ronnie Harrison Jr. could get to the spot.

-After the Bengals had stuffed Cleveland on four-straight downs from the Cincinnati 1-yard line in the second half, Burrow and the offense took over only inches from their own goal line. The Bengals tried to draw Cleveland offsides to give themselves some breathing room. It failed, causing TV analyst Troy Aikman to remark about the hard count attempt, “You have nothing to lose. Burrow tried it, but Cleveland held tight.” A few seconds later, Burrow tried the hard count again, and, what do you know, the Browns crossed into the neutral zone. A five-yard gain for Burrow just for trying a little harder.

Burrow ran for first downs when it was four down. He hit a streaking Green every now and then. He kept plays alive when, in reality, he should have been sacked. Down by 12 points in the fourth quarter, he led a 14-play, 69-yard touchdown drive. Burrow looked good, sometimes really good, despite the loss.

Sure, there were some mistakes, and his hapless offensive line and the team’s defense didn’t give him much help. He took a sack from Sheldon Richardson after a terrible decision from Burrow, where he could have thrown the ball away but instead tried to spin around the defensive tackle. A few plays after the hard count worked so well, he was strip-sacked and gave Cleveland the ball back on the 1-yard line. He went through stretches where he was inaccurate with his throws.

But even though the Bengals are off to an 0-2 start, Burrow has infected this team with excitement about the possibilities of his talent. Most of the Bengals first-round quarterback draft picks haven’t panned out. All of them left the team with losing records. Maybe Burrow will follow in those footsteps. Maybe, though, he’ll be something else entirely. Maybe he can be the quarterback the organization has dreamed about for the past 50 years—its savior and Super Bowl champion.

Here are some other NFL notes:

But after playing mediocre against Baltimore last Sunday, Mayfield completed 16 of 23 passes for 219 yards, two touchdowns and an interception vs. Cincinnati on Thursday. Yes, Nick Chubb should draw the headlines for the night, rushing for 124 yards and two touchdowns. But for now, Mayfield should probably keep his job.

It’s one thing if New England’s Bill Belichick harshly critiques Brady’s play. But does Arians have the same liberties, especially in such a public setting? Apparently so.

On Sunday, Arians said, among other not-so-positive things, “He knew he didn’t play very well. … He looked like Tom Brady in practice all the time, so it’s kind of unusual to see that in a ball game because they didn’t do things that we didn’t get ready for.”

COVID-19 concerns: With about 16,000 fans in the stands for the NFL’s season opener in Kansas City with the Chiefs vs. the Texans, one attendee tested positive for COVID-19 in the days afterward. A week after the game, the Chiefs said it had asked 10 fans who had been in contact with that person to go into quarantine.

According to ESPN.com, though, all players, coaches and employees from both teams have tested negative since that contest.