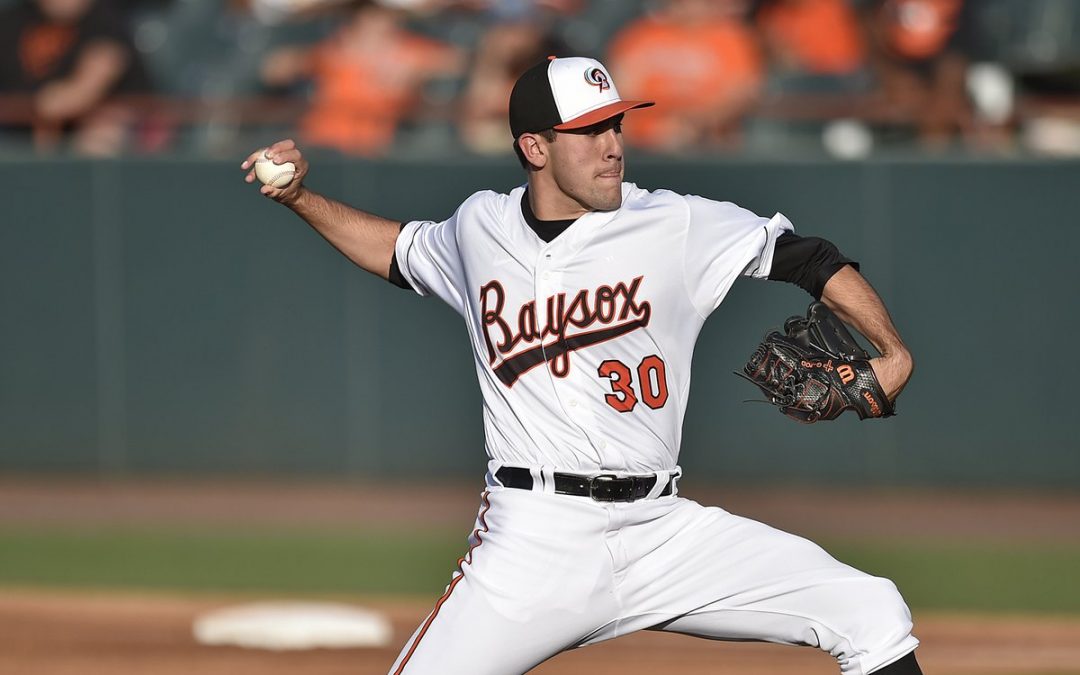 The best pitching prospect in baseball continues to prove that isn’t a faulty claim. Coming off the worst start of his season where he gave up three runs over five innings on three hits and two homeruns. Its hilarious that his worst start of the season came with no walks, a 0.60 WHIP, and more than a strikeout per inning (six). It must have pissed him off because he came out firing on all cylinders on Sunday setting a personal best strikeout number in his young minor league career with 12 over five innings. He had an absurd CSW percentage (called strike plus whiff rate) over 50% for the game. He was blowing an easy fastball between 96-99 mph past batters, getting called strike threes with a tight breaking ball, and getting ugly swings and misses on his offspeed pitches. This dude might be challenging Adley Rutschman for best prospect in the minor leagues period, the pitcher part is not even in question. Not that it was in doubt but his performance is not a fluke. With A+ Aberdeen he had a 1.54 ERA over 23.1 innings and his xFIP was 2.35. After his most recent performance with the Baysox he has a 2.04 ERA in AA over 39.2 innings and his xFIP is 2.42. Between both levels he has 97 strikeouts over 63 innings for a strikeout percentage over 40%. And his command? Excellent with a 5.7% walk rate in A+ and an even better 5.3% in AA. He is Jacob DeGrom esque in the way that offenses need to hope they connect with a long ball to do damage against him with only five of the 13 earned runs he has allowed not coming from a homerun.

I’ve seen it argued that the reason the Orioles haven’t promoted Jones to the majors yet is that they are high on his long term prospects to help the next good Oriole team. That might sound contradictory since he has an excellent 141 wRC+, 14.9% walk rate, and .396 wOBA but it makes their claims of making sure he is ready defensively hold more merit. The bat is without a doubt ready. He is showing great patience at the plate, hitting for a high average (.288), and for good power too – .219 ISO, 8 doubles, 3 triples, and 6 homeruns over 146 at bats. I’ve seen fans point out “how can he work on his defense at second base when he is getting time in the outfield” but Jones’ versatility is a big part of his value. He is a great athlete that can make great plays at second base and all three outfield spots but, especially at second, can struggle to consistently do the little things right. They’re looking at him as a guy who will get a shot to take over second base but at the same time he can get his bat in the lineup in other ways down the line because the Orioles also have two very good second base prospects that won’t take long to make their debuts either. Terrin Vavra is currently on the injured list with a back issue but he was lighting the world on fire to start the season before I’m sure trying to play through the injury. And with their second pick in the draft last week the Orioles took Connor Norby who is a refined college bat and maybe the most potential of the three prospects. I am anxiously waiting for Jones to get the call any week now because it will mean they believe he is ready, not just because they have a black hole at second base.

Carmona was acquired from the Milwaukee Brewers along with RHP Luis Ortiz (who has since been released) as the return in the Jonathan Schoop trade at the deadline in 2018. He seemed like the gem of the trade at the time as he was an 18 year old international prospect who was having a respectable season in rookie ball (.705 OPS). He struggled in Aberdeen, which was short season A ball at the time, with a .581 OPS but he was significantly younger than the competition. In 2019 he repeated the level and I came into the season high on his prospects of establishing himself. Instead he did even worse with a .561 OPS. With 2020 being a wash I had basically written him off as a prospect coming into 2021 even to the point of making jokes about his lack of presence on a full season roster during our minor league preview on the ‘On the Verge’ podcast. He started the season in extended spring training but was finally added to A Delmarva’s roster with Jordan Westburg and Gunnar Henderson headed up to the Ironbirds. Over his first 98 plate appearances he has been fantastic at the plate and is opening my eyes back up to his prospect potential. He is still only 21 years old and is batting .291 with a .784 OPS, 10.2% walk rate, and 121 wRC+. He hit his first homerun since 2018 last week and he made it a double in back to back at bats. Add him to the stacked list of middle infielders throughout the Orioles farm system.

Before last week’s start I wrote this about Bradish on the Baltimore Sports and Life message board: “I’m still a big believer in Bradish. This is his first season pitching above A ball, he dominated AA completely before quickly getting promoted to AAA, his FIP is 3.43, and 6 of his 7 starts have been against Durham and Charlotte (3 each) who have very good veteran line-ups.” So of course he comes out and has easily the worst appearance of his career. The command was non-existent almost to the point of writing it off. Four walks and four wild pitches in less than two innings is, wait for it, wild. Obviously it still counts and speaks to the risk he has that makes him a lesser prospect than Grayson Rodriguez and DL Hall despite Matt Blood telling us he is right up there with him. His unique delivery gives batters a challenging look with his high spin mid-90’s fastball and diving breaking ball from as over the top as you can get but it appears that it is a harder delivery to consistently repeat. He wasn’t the only Norfolk starter to have real control issues last week, LHP Kevin Smith couldn’t even make it out of the first inning of his start as he walked three batters. I’m not sure if it’s the crackdown on sticky stuff or just a random bad week but for now I still have faith that the Orioles pitching development can and will get them back on track.

Knight has been a top contender of comeback player of the year when it comes to the Orioles minor league system. The Orioles third round pick in the 2018 draft, he came out strong in 2019 with A Delmarva going 3-0 with a 0.68 ERA, 33 strikeouts, and only four walks over 26.2 innings before being promoted to then A+ Frederick. He hit a brick wall with them as he put up a 6.13 ERA over his remaining 83.2 innings of the year with 39 walks and only 56 strikeouts. He started this season back in A+, this time with Aberdeen, and I was disappointed to see him as part of the rotation given that he was 24 years old (he turned 25 in late June) and had struggled badly at the same level two years prior. Fortunately he has proved me wrong as he cruised past his first four starts of the year to the tune of a 2.41 ERA and was quickly promoted to AA Bowie where he has continued to pitch very well. This past week was easily his worst performance of the season and even so he still has a 3.77 ERA over 31 innings in AA with 32 strikeouts, 10 walks, and a 1.10 WHIP. I saw him live when he was still in Aberdeen and the stuff looks good. A mid-90’s fastball and a tight slider tells me that he can at least be a solid two pitch reliever at the major league level but who knows maybe he can develop a solid change-up to make a run as a back end of the rotation starter.

Last week had to be a let down after going to Colorado the week before to participate in the Future’s Game festivities. Rutschman received countless praise from the illuminati of minor league reporters. He hit a 468 foot blast into the third deck of Coor’s Field in batting practice, was seen chatting it up with Ken Griffey Jr. in the dugout, and had a solid couple of at bats in the game itself with a flyout and a walk. It has to be a let down to go from that to flying back into the grind of the AA season when he should probably have been promoted to AAA Norfolk by now. Skill wise he is definitely ready for that level of competition but I think they want to give him as much time as possible to catch the litany of pitching prospects in Bowie especially Grayson Rodriguez. I would chalk last week, the worst week of his season statistically, up as a let down from the high of the week before. He still had a two hit game and a double in another one but he only walked once and struck out six times over 23 plate appearances. He did have a highlight play on defense when he blocked a ball in the dirt and then threw out fellow top prospect Spencer Torkelson trying to steal. The most underrated part of what Adley brings to the organization is his maturity, leadership, and work ethic so one bad week isn’t going to deter him from adding value to whatever team he is on. In three weeks or less, once Wander Franco’s prospect eligibility expires, he will be the top prospect in all of baseball and its exciting to think that he will be making his much anticipated major league debut in less than a year from now.