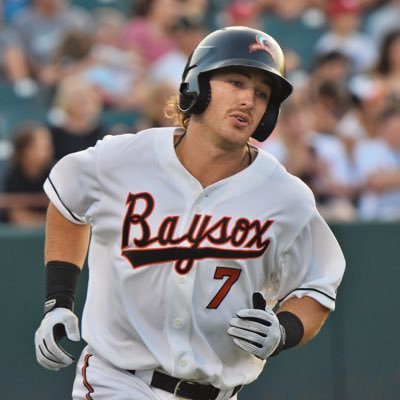 Rizer continues to be the most productive outfielder taken in the 2019 draft despite being the least heralded of the trio and signing for the least amount of money. He beat Kyle Stowers and Zach Watson to Bowie after hitting .288/.373/.542 (.916) for high Aberdeen with six doubles and three homeruns over 59 at bats. This after surprising everyone following the draft in 2019 with a .308 batting average and .821 OPS. He is off to a great start with AA Bowie as well as you can see by his line above. He is continuing to hit for power but he didn’t walk a single time in 28 plate appearances. This after a 7.5% walk rate with Aberdeen and a walk rate just under 6% in 2019. It could be that pitchers are challenging him more right now and they’ll start throwing more pitches outside of the zone because he is hitting everything inside it at the moment. Rizer may not have the projectability or raw tools that a Stowers, Watson, or even Robert Neustrom have but as long as he continues to perform it won’t matter. Being at AA at 24 years old is a good step towards making his major league debut by the time he is 26.

Austin Wynns may have been the one to replace the struggling Chance Sisco on the major league roster but that is because he is a stable influence behind the plate defensively and was performing well with the bat. He is just a stop gap while Nick Ciuffo is hurt and the world waits on Adley Rutschman to arrive (OPS above 1.000 again this week). In the meantime Cumberland is turning himself into a catching prospect worth keeping an eye on. He doesn’t have the best reputation on defense but that is general, not with what the Orioles have been running out there lately. He also doesn’t hit for the highest average (no higher than .269 in a full season since his debut in 2016) but when he does make contact he hits the ball hard. He has patience and can take a walk (12% this season). I’m not sure if he’ll be the offensive minded backup catcher that some fans imagined Sisco to be but I’m sure the switch hitter will at least look less lethargic when hes up there taking his hacks. On a more serious note, Cumberland was the one who hit the line drive off of Durham pitcher Tyler Zombro which caused Friday’s game to be suspended and Saturday’s game to be postponed. First of all I was glad to hear some positive reports about Zombro’s condition but second of all I was glad to see Cumberland back in the lineup and productive (2-3 with a homerun and a walk). Its not easy to be anyone on either team after something like that happens.

Outside of Sunday which was a 11-13 Baysox loss started by the rehabbing Mike Baumann (see below) the Bowie pitching, particularly the starters, has been phenomenal. On here I have already talked about DL Hall, Kyle Bradish, Kevin Smith, and Grayson Rodriguez – who had an impressive AA debut on Wednesday striking out eight batters and only allowing one run over five innings. Blaine Knight also made his AA debut this week and pitched well – two runs over six innings with six strikeouts and one walk. But the most random incredible start came from Bishop. The 25 year old who struggled to a 4.67 ERA in high A in 2019 and had a 5.87 ERA through his first four appearances this season looked like John Means on Tuesday. 80% of the outs recorded over five scoreless innings were via the strikeout. His changeup looked major league quality based on the clips that I saw. I’m not sure how sustainable this version of Bishop is but Baysox pitching coach Justin Ramsey has been a magician since the Orioles hired him before the 2019 season so perhaps it is. Ramsey led the 2019 Delmarva Shorebirds pitching staff to record breaking strikeout numbers and is picking up where he left off two levels up this year. Of course he has great talent to work with but he is obviously great at getting the most out of them. I look forward to Bishop’s next start/appearance to see how he follows up on this masterpiece.

It has been a rough start to 2021 for Baumann. It really started last summer when he was shut down with a flexor strain while working out at the team’s alternate site. It was reported that he avoided any ligament damage but he was brought along very slowly in spring training and didn’t start the minor league season on the AAA Norfolk roster. In mid May he made a couple successful rehab starts for A Delmarva progressing from two to three innings. He was then bumped up to AA Bowie but couldn’t make it out of the first inning in his first start for them. His second rehab start for the Baysox wasn’t so bad but he only struck out one batter and walked three over three innings. Sunday seemed like it could be his last rehab appearance before finally joining the AAA rotation but he was roughed up once again giving up seven runs (four earned) on four hits and three walks with three strikeouts. Maybe they still have him make his next start for Norfolk but I would think they would want him closing his rehab stint on a positive note. Of course the biggest concern is if he is fully healthy. I have no way of knowing but the Bowie announcers did note that he hit 97 mph on the radar gun. Hopefully it is just a matter of re-finding the feel for his command and/or offspeed pitches because the Orioles could really use some positive pitching developments at the top of the farm system to go along with all the great work at AA and below.

Its getting to the point with Hall that I have to consider dropping him considerably when I make my next top 30 prospects list for a mid-season update that will be dropped on the ‘On the Verge’ podcast sometime in July. He had one week where he was hot with the bat but has immediately gone back to not being able to hit like he was to start the season. It says a lot to me that he started the season in high A despite a great season in low A in 2019 and the year off to work on things. He has also been bounced around between second base, shortstop, and center field but in a way that seems like hes making room for other players rather than to give him more versatility (even if that happens in the process). He is batting .214 despite a .347 BABIP, he isn’t hitting for any power (.274 SLG, .060 ISO), and he isn’t finding any other way to get on base (.283 OBP, 6.5% walk rate). Most concerning is his strikeout rate which has jumped from the low twenties to 36.6%. To be fair to him he did have a year off where he wasn’t at organized team instruction, just turned 22, and it is still only five weeks into the season despite being June. I’m not throwing in the towel but I have gone from ‘not very concerned’ to ‘pretty concerned’.

Zebron was initially left off of the full season rosters but it was only a matter of time before he showed up on Delmarva’s pitching staff. He had back to back great seasons in the GCL at 18 and 19 years old. A 2.97 ERA over 30.1 innings in 2018 improved to a 1.31 ERA over 41.1 innings in 2019. After the year off he is still just 21 years old. Hes a local Maryland kid who was drafted out of high school in the 18th round in 2018. I was excited to see what he could do at the full season level but he is off to a very poor start in his first two appearances. I suspect he’ll perform better as he gets settled in after all that time away meaningful, competitive games. From the last I heard he has a fastball that touches the mid-90’s and a projectable frame with some breaking balls that show promise. If there is anything I trust this regime to do it is develop young pitchers with good raw stuff into high strikeout, productive arms. If there is anything to get out of Zebron, and I believe that there is, then the Orioles should be able to do so.