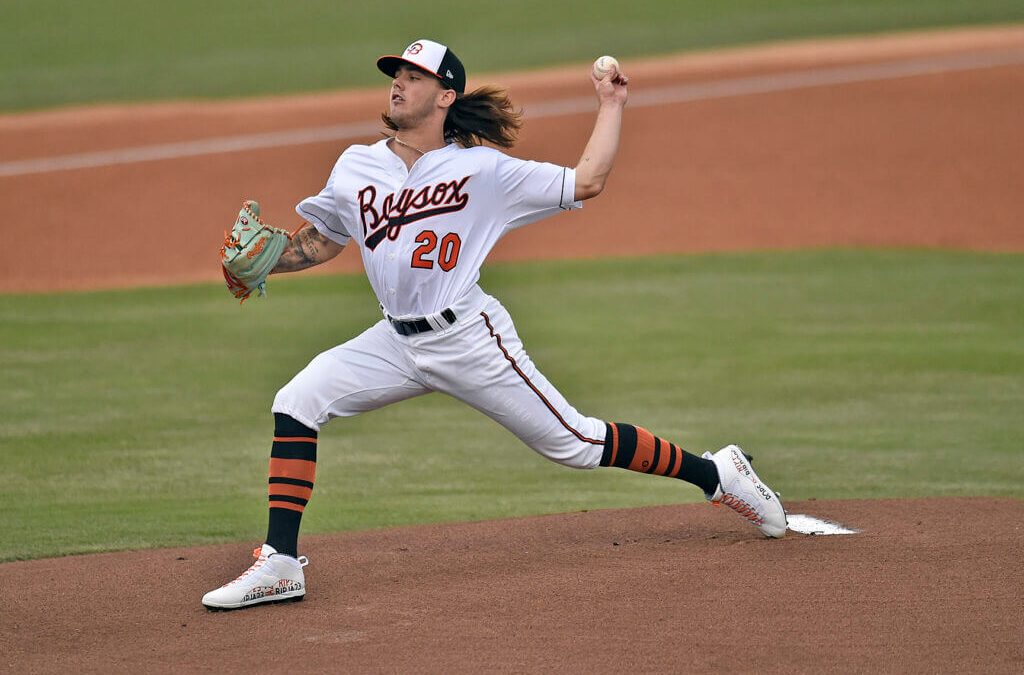 Henderson is dominating AA at 20 years old. It was impressive when he hit .312 with a .944 OPS over 157 plate appearances for a 147 wRC+ in A Delmarva as a 19 year old at the start of 2021. Its way more impressive that he is hitting .309 with a .965 OPS over his first 109 plate appearances for a  176 wRC+ with Bowie. He is first place in the Eastern League when it comes to on-base percentage at .459 and he’s fifth in OPS (.965), sixth in batting average (.309), tied for fourth in steals (10 for 10), tied for fourth in RBI (18), tied for first in runs (21), and second in walks. And again, he is 20 years old facing what is typically the biggest challenge for a young player in AA. I can’t stress that enough. He went from a powerful bat that strikes out a lot and walks a little more than average to one of the best walk rates to a powerful bat with an elite walk rate (21.1%, fourth best in the Eastern League) and well above average strikeout rate (18.3%, ninth best in the Eastern League). The power numbers aren’t eye opening, four doubles and four homeruns for a .198 ISO, but you can see it is in there with consistently high exit velocities and long line drives to the middle of the field that are caught. Those improvements at the plate to go along with obvious improvements in the field (he is getting to more balls, fielding them cleaner, and being more accurate with his strong arm) and being a great baserunner (26/28 on stolen base attempts the past two seasons) has him looking like one of the best prospects in baseball let alone one of the best in this system.

Luckily I was able to watch Hall pitch for the Baysox on Thursday afternoon because if I was just looking at the box score and maybe some highlights he would not have been listed here. The truth is he looked absolutely incredible, probably the best I’ve ever seen him pitch. The fastball was electric, an easy 98-99 mph from the left side and touching 100 on a few occasions. His changeup was getting a bunch of swings and misses and his breaking ball was landing for strikes. Honestly everything was landing for strikes. Of his 59 pitches before being pulled from the game due to pitch count with runners on second and third and two outs following a ball slapped into left field, 47 of them were strikes. That’s 80% for a guy whose biggest concern is command. His only walk was aided by an automatic ball called on him for taking too long between pitches. That happened to him twice and didn’t rattle him at all. When it comes to pure stuff Hall is ahead of Grayson Rodriguez who himself is widely considered the best pitching prospect in baseball. Rodriguez has a wider range of plus to plus plus pitches and the frame of a workhorse ace. Hall could be more dominant over shorter stints but if the command is consistently better and he proves to be healthy, maybe those stints won’t be so short in a year or two. Not a bad potential one two punch at the top of a rotation and they’re both now one step away from making their major league debuts after Hall was promoted to AAA Norfolk following the game. All indications point to Adley Rutschman making his major league debut next week and the top two pitchers in the farm system aren’t far behind at all.

Stallings was a given to be on here after pitching six no-hit innings in game one of a double header on Sunday. Morgan McSweeney finished the job with a scoreless, hitless seventh inning to give the Baysox their 11th no-hitter in team history and the first one since Michael Baumann did it in July 2019. His was over nine innings but hey, it still counts. And it still points to a great start to the season for the underrated Stallings. I guess that’s what happens when his HR/FB ratio drops down to a normal range, especially considering it is a number that the pitcher isn’t thought to have control over. Last year it was 31% in high A and 23.1% in AA. This year it is 12% which is perfectly average. In turn he has a 2.63 ERA on the season over five starts covering 24 innings. He is striking out more batters than he ever has as a professional (25.3%) although he is walking more batters than he ever has as well (8.8%). Maybe the two numbers are related but honestly that is still a good number. The only qualified pitcher on AA Bowie’s roster with a better walk rate is Drew Rom at 7.9%, Stallings actually has the 17th best walk rate in the Eastern League. With Kyle Bradish already in the Orioles rotation and Grayson Rodriguez and DL Hall soon to follow, that will leave plenty of room for a pitcher like Stallings, who already has 50 AA innings, to step into the AAA Norfolk rotation in the next month or two.

The good news for Stowers is his strikeout rate is much improved this season. He struck out in 32.3% of his plate appearances last year between high A Aberdeen, AA Bowie, and AAA Norfolk and 34.4% of the time in AAA specifically over 93 plate appearances. This year it is down to 22.3% over 94 plate appearances which is more than respectable for a power hitter. And he is still hitting for power with seven doubles, three homeruns, and a .200 ISO. A career low .250 BABIP has left him with a .213 batting average and .736 OPS on the season but that is actually a perfectly league average 100 wRC+ offensive profile for the International League. The bad news is that Stowers is in a terrible slump right now. After starting the season batting .268 with a 1.022 OPS, .366 ISO, 12% walk rate, 16% strikeout rate, and 167 wRC+ over his first 50 plate appearances he is hitting .154 with a .429 OPS, .026 ISO, 9.1% walk rate, 29.5% strikeout rate, and 25 wRC+ since, covering 44 plate appearances. Overall his walk rate is down a little, 10.6%, but we’re also looking at his numbers during a nadir of the season. The problem is he is pulling the ball more than usual (45% of the time) and hitting the ball on the ground more than usual (44.1% of the time). When he’s going good Stowers tend to elevate the ball and hit it to all fields.

Before I get into the week and the season that Deson is having let me first say that the projectable 19 year old outfielder in his first taste of full season ball is still firmly in our top 30 list of Orioles prospects. He has the tools to hit for average and for power while playing a solid outfield in the long term if he continues to develop them. He is a tall, skinny guy with plenty of room to grow into his frame. That said the results at a very young age having displayed themselves just yet against low A competition. It’s the story of a lot of player for Delmarva as they try to adjust to life in a colder climate, grinding six days a week for five months. Deson is batting .244 on the season with a .577 OPS for a 69 wRC+. He hasn’t been able to tap into any power (.033 ISO) thanks to hitting the ball into the ground 63.3% of the time. His strikeout rate has risen to 27.8% and his walk rate has dropped to 6.2% but those still aren’t horrible numbers considering his age for the level. When he gets on base he is utilizing his speed with six steals in eight attempts. If he can rebound to have a respectable batting average even if it is relatively empty, a season similar to Darell Hernaiz last year, Orioles fans should be happy with his progress.

The 24 year old undrafted free agent following the five round 2020 amateur draft Watson started the season pitching bulk innings out AA Bowie’s bullpen and quickly earned a spot in their rotation after throwing eight perfect innings with 10 strikeouts. His first start added five more scoreless innings with six strikeouts. After seeing that start and then hearing Drew Rom praise him when he came on to ‘On the Verge’ last week I made it a point to pay attention to his next start. So of course he gave up four extra base hits to the first four batters he faced and a two run homer later in the outing to raise his ERA for the season from 0.00 to 2.41. It was what he did in-between those two events that made me a believer in him as another pitching prospect to watch out for in 2022. With Adley Rutschman behind the plate he settled down and kept the team in the game. If you take away the first four batters of the game he went 5.2 innings only giving up two runs on three hits and a walk with six strikeouts. Jon Meoli brought to my attention in one of his recent excellent newsletters that Watson experienced an increased in velocity coming into the season and now sits closer to 94 mph than 91 mph. That plus a well rounded pitch mix, an outstanding 32.4% strikeout rate and even better 5.9% walk rate, and a FIP/xFIP of 3.12/3.53 in the upper minors has me considering how high he will land in our mid-season top 50 prospect list, not just wondering if he is going to be in it.