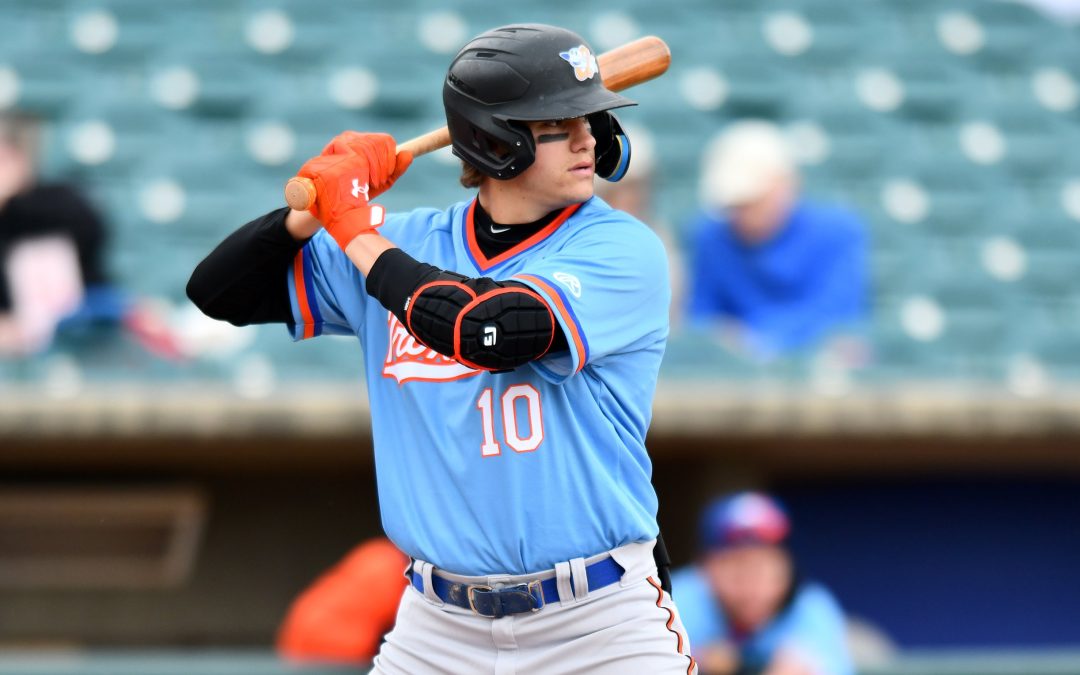 The big story in Aberdeen last week was the two guys just passing through on rehab appearances. Adley Rutschman played in his first official game of the season last Tuesday as he works his way back from a strained triceps and I made sure I was there to see it. He looked great, hitting the ball hard twice – one a lineout to left field and the other a double pulled down the line. He also worked a walk. Overall for the week he was 6-14 (.429 batting average) with three doubles, two walks, and just one strikeout. Left handed pitcher DL Hall was the other rehabber although it was more a matter of building his pitch count back up after being shut down last season with a stress reaction in his elbow. He pitched on Friday and was his typical electric self, striking out six batters over four innings and only allowing two hits with no walks. Both of the big names were successful in their cameo appearances with the Ironbirds and moved up to AA Bowie this week to continue their trajectory towards the major league team.

Meanwhile, while everyone’s attention was on Aberdeen Coby Mayo decided to have a breakout moment of his own. The 20 year old absolutely demolished a ball in his first at bat that I saw him take, it was a ball that would’ve easily cleared the new left field wall at Camden Yards. Same goes for the second homerun he hit in that game. I also saw him leg out an infield single in a surprising display of speed for a guy his size and show off his arm at third base. He went on to hit two more homers during the week leaving him with six on the season. For a player that is two to three years younger than his competition he looks remarkably confident in every aspect of the game and for good reason. He has a walk rate that is around league average (8.1%) which I suspect will rise to the levels he showed in the FCL and low A in 2021 (around 13%) the more comfortable he gets and he has kept his strikeouts to a very manageable level for a power hitter (23.3%). As it stands he has a wRC+ of 127 which means he is 27% better than league average. If he continues at this rate I would expect him to take over as AA Bowie’s 20 year old at the top of the batting order shortly after Gunnar Henderson turns 21 on June 29th.

Unlike AAA Norfolk, AA Bowie, and A+ Aberdeen who are right near the top of their respective leagues in a bunch of offensive categories, most notably walks and on-base percentage, A Delmarva is in a different development state with mostly 18-20 year olds making their full season ball debuts. This continues to be a learning experience for Orioles fans who are new to the world of mass international signings. You can see the flashes of tools but not many who have put them all together yet outside of a guy returning to the level like Darell Hernaiz who can’t be far from being promoted to Aberdeen. One guy who is making the most of his opportunity is Bellony. The 20 year old is actually a rare remnant of the Dan Duquette era and one of the few international signings that front office regime made. For the season he has a .279 batting average and .873 OPS with a well rounded approach at the plate. He is showing some power with four doubles, three homeruns, and a .213 ISO while also walking at a well above average rate, 13.9%. The one red flag is he is striking out 30.6% of the time but again he is a 20 year old making his full season ball debut and not everyone can be Coby Mayo. He could be one of the few Shorebirds hitters to earn a promotion over the course of the season.

AAA Norfolk had been an offensive powerhouse to start the season with hot starts from Kyle Stowers, Tyler Nevin, Jahmai Jones, Terrin Vavra, Rylan Bannon, and Yusniel Diaz. Then Diaz and Vavra hit the injured list, Nevin was promoted to the big league roster, and Jones and Bannon went ice cold at the plate. Stowers has continued to be solid but not enough to make up the difference. Neustrom actually started off a little colder than the rest of the opening day lineup but has made up for it of late. He still has one of the best power strokes that make you easily imagine him being the first guy to hit the warehouse on the fly during a game or at least depositing plenty of balls onto Eutaw Street but that isn’t the only thing that he is displaying in an attempt to make it to the majors. The 25 year old has improved on his first taste of AAA at the end of 2021 in almost every way. He has maintained an above average walk rate (11.3% last year, 11.5% this year), cut down on his strikeouts (24.5% last year, 14.6% this year), and improved his isolated power (.192 last year, .214 this year). It will be interesting to see who gets the first shot at their major league debut between Neustrom and Stowers with a crowded OF/DH situation for the Orioles while everyone is healthy. My guess is if there is an injury and a placeholder is needed Neustrom will get the call. If/when one or both of Trey Mancini or Anthony Santander is traded a more permanent role is available that would go to Stowers first.

While the Orioles major league infield has been scuffling all season, just waiting for someone in AAA Norfolk to give the team an excuse to replace them, Bannon was doing everything he could to be the guy to earn a promotion. In the first 14 games he played this season he batted .353 with a .950 OPS. The 26 year old was added to the 40 man roster prior to the 2021 season but battled through injuries and an incredibly low batting average on balls in play to what amounted to a wasted season outside of a two week red hot stretch in August. The fact that he has remained on the 40 man despite that speaks to some level of confidence by the front office that he can rebound this season. Unfortunately since April 23rd he is hitless over his last 24 at bats. The only (and I do mean only) good thing over those last eight games is that he has continued to walk (21.9% rate during that stretch). Despite the recent struggles he has still been slightly better than league average overall (104 wRC+) so if he can get things back on track there is still a chance we see him on the Orioles this season. Tyler Nevin beat him to the punch and is getting playing time mixed between third base and DH so far but if Trey Mancini is traded or Chris Owings and/or Rougned Odor are DFA’d that could open up another spot for Bannon or someone like him (Jahmai Jones, Terrin Vavra, etc).

Another guy who started extremely hot and has cooled considerably (although not as much as Rylan Bannon) is Westburg. After an impressive showing at major league spring training he came out of the gates strong repeating AA Bowie. Over his first nine games of the season he batted .306 with a 1.139 OPS, more than twice as good as league average with a 208 wRC+. While Bannon’s early success came with a BABIP in the .450’s, Westburg’s wasn’t driven by luck on batted balls since he had a very normal .298 BABIP during that stretch. He also walked 20% of the time, only struck out 17.8% of the time, and crushed the ball to a .389 ISO. Since then hes batted .114 with a .397 OPS over his last 11 games covering 44 at bats. His walk rate dropped to 6.4% and his strikeout rate spiked to 34% so he clearly just isn’t seeing the ball as well right now but at the same time his BABIP was .148 so there has also been a fair bit of bad luck involved. There may not be a more professional hitter throughout the Orioles minor league system so the level of concern here is not very high but the fact of the matter is that he was “ice cold” this week so he fit the category well. I still expect Westburg to work his way to AAA Norfolk by July and potentially get a cup of coffee on the big league club at the end of the season but step one is to get back on track with Bowie.

Don’t be alarmed by Rodriguez’s ERA during this past week’s two start stretch. While he wasn’t as sharp as he was during his first three starts of the season he was forced to get extra outs multiple times early on in these games. On Tuesday there were two “hits” that should’ve easily been errors, fairly routine plays that hit off of shortstop Richie Martin’s glove. That led to all three runs that scored and officially go down as earned runs on his line. But he settled down after that and was able to shut down Gwinnett over the next three innings. It was a similar story on Sunday in his second start of the week against Gwinnett. Two fly balls to left field were misjudged by Christopher Cespedes and ended up over his head, one of them hitting off of his glove. That led to four runs scoring in the second inning, all “earned”. He finished that outing giving up one more run in the fourth inning and exiting after getting one out. His ERA for the season sits at 4.15 but his FIP is 1.88 and his xFIP is 2.28. The stuff is still electric and if anything he pitching even better than last year if you look at his metrics. He is striking out a ridiculous 37.9% of batters which is only slightly down from the 39% he struck out a level below with AA Bowie last year. He is only walking 5.7% of batters so far which is down from the 7.1% of batters he walked with the Baysox. I still fully expect Rodriguez to make his major league debut over the next month or so and to be able to find success at the major league level rather immediately.