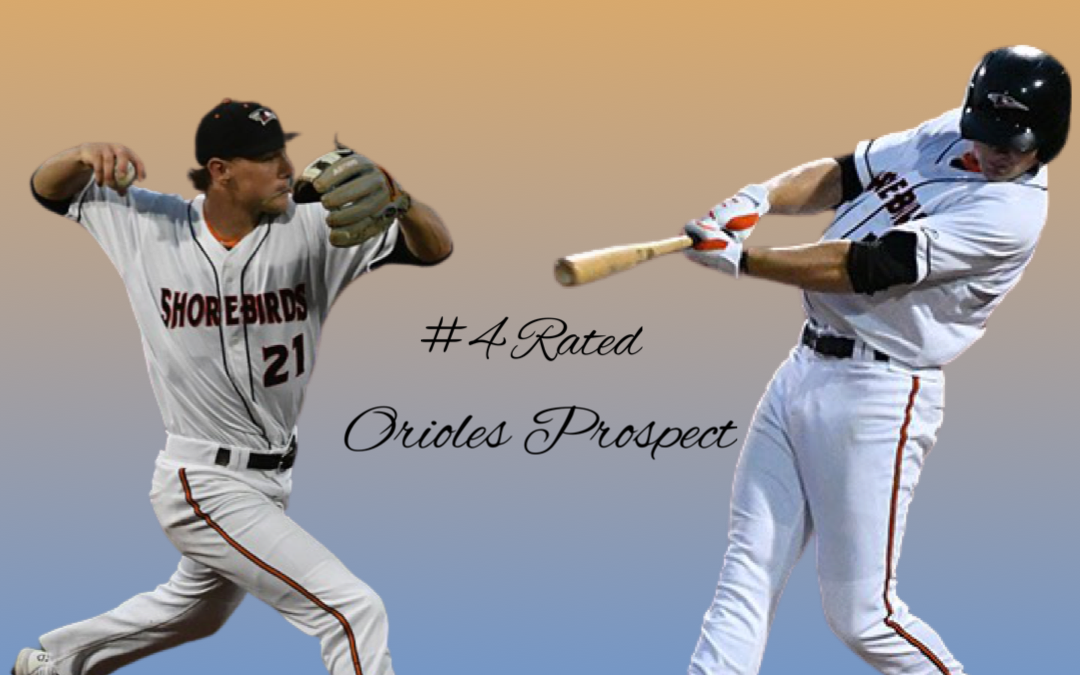 I took a week off from this article for Labor Day and ironically Henderson did nothing but put in work over the two week span in-between. His line could’ve been even better thanks to some hard hit balls right at defenders and some big strike zones from umpires. His batting average is now sitting at .230 but that isn’t as bad as it seems when you consider he started his stint in Aberdeen going 1-31. His walk rate has stayed consistently great throughout (13.8%) which is a great sign that he is adapting well to the Orioles attempt to improve swing decisions throughout the minor leagues. The best thing about the most recent two week stretch has been the return of the power he showed at low A Delmarva with six extra base hits including three homeruns. Right as we were getting ready to record Monday night’s ‘On the Verge’ podcast with The Baltimore Sun’s Jon Meoli the news broke that he had been promoted to AA Bowie for their stretch run. It was definitely surprising news but less so once you think about how he was likely to start 2022 in AA so why not give him a preview of what to get prepared for as well as let him participate in a highly competitive environment. It’s a great reward for a great first full season for the top 100 prospect.

Cowser continues to look like the best player on the high school varsity baseball team being allowed to play for the JV squad despite being promoted up a level from the Florida Coast League. He has incredible bat control which allows him to hit for a high average and rarely strikeout and a patient approach at the plate to be able to draw a bunch of walks (18.2% walk rate). He hasn’t had many extra base hits over his first 20 games with the Shorebirds but we have seen him turn on some pitches so we know its in there. Realistically he should be high A Aberdeen but the goal for him over the last month or so of the season appears to be to just let these 2021 draft picks get their feet wet going into the offseason and let them get a feel for the coaching and player development system. Most likely Cowser will start 2022 with the Ironbirds and look to get promoted before the halfway mark but I don’t think its out of the question that he starts in AA with Bowie. He is a highly polished college hitter, arguably the best in the draft class, and despite Baseball America leaving him off of their latest top 100 list his elite hit tool should allow him to move quickly through the system and allow him to be a table setter for the Orioles lineup in the next couple years.

Brnovich struggled a little bit initially after being promoted from high A Aberdeen to AA Bowie a little more than a month ago but he’s dealing now. One of the four pitchers acquired from the Los Angeles Angels in the Dylan Bundy trade, he relies on a plus breaking ball and above average changeup and command to get batters out. His fastball sits in the low 90’s but as long as he can command it like he is capable of he should at least be able to carve out a role in a major league bullpen. Its important to keep in mind that this is Brnovich’s first professional season after sitting out 2019 after being drafted (which is just a strategy the Angels do across the board with their pitchers) and then missing 2020 due to the pandemic. He has adapted very well, very quickly. All of his peripherals line up with his positive stat line which is why he has continued to creep up my personal prospect rankings all season long. Honestly most of the pitchers acquired from the Angels over the past couple years have other than Isaac Mattson who has dealt with some off the field stuff. Zach Peek is pitching exceptionally well since being promoted to high A Aberdeen, Kyle Bradish is a consensus top 10 prospect in the top farm system in baseball, Jean Pinto is quickly becoming my favorite pitching prospect not named Grayson Rodriguez or DL Hall, and even Garrett Stallings despite giving up way too many homeruns has shown flashes of brilliance. I already think the pitching prospect cupboard is far from bare but if Mike Elias keeps trading with the Angels it could stay full for the foreseeable future.

What a roller coaster ride Bannon’s season has been. Honestly there has only been one hill where the numbers spiked but it was a big one. Nobody had a better two week stretch than Bannon did in the second half of August but just as quickly he has come crashing back down to the low output he had been putting out for most of the season. It is so hard to know what to make of his season when you consider he has a .165 batting average for balls in play which is so obscenely low I don’t even know what to make of it. He has sustained solid walk, strikeout, and isolated power rates that are right in line with his career averages but his BABIP is around half of what it was in 2019 which has led to his batting average sitting at .173 for the season. I am surprised he wasn’t promoted to the Orioles once rosters expanded to 28 on September 1st after hearing Mike Elias make some positive comments about him and the fact that he is already on the 40 man roster but instead they’re giving Kelvin Gutierrez every day at bats from the hot corner. Perhaps they want to give him a chance to reset over the offseason and start fresh in spring training 2022. I’m not writing him off yet but he certainly didn’t take advantage of the infield situation in Baltimore this year.

Grenier has been remarkably consistent throughout his minor league career. His batting average sits in the low .200’s (.233 this year), he walks between 11-13% of the time, strikes out around 30% of the time, and holds an isolated power in the low .100’s. He has essentially been a league average hitter for each level he has played at but with his great defense up the middle at shortstop and second base that holds value as long as he can continue that as he continues to move up the ladder. When he is at his best he is working counts and lacing doubles into the outfield gaps. At his worst he is a strikeout machine. But the beauty of great defense is that it never (ok, rarely) slumps. He will be rule 5 eligible if he isn’t protected by being added to the 40 man roster in the offseason but there will be a lot of tough decisions for the Orioles in that area. He is in a similar position to Mason McCoy around this time last year and I could easily see him getting near every day at bats in AAA Norfolk in 2022 but never quite hitting enough to get called up to the bigs. Hopefully he does enough to eventually get to make his major league debut but regardless he is a good player to have in the organization even if he doesn’t live up to the standards you would like out of a high draft pick.

Bishop was having a fantastic comeback season for AA Bowie before he was shut down with an injury. He was easily forgotten coming into the 2021 season but did a lot of piggy backing, either starting or getting bulk innings in relief, en route to a 3.38 ERA over 45.1 innings before going on the injured list. His strikeout rate jumped up a full batter per nine innings and his walk rate fell a full batter per nine innings from 2019 when he pitched 113.2 innings with a 4.67 ERA. The injury really derailed what was looking like a breakout season for the lefty but he is back rehabbing with low A Delmarva. Unfortunately it hasn’t been going well. At all. He is giving up three hits per inning over the few innings he has been able to complete. To be fair to him the BABIP against him is an astronomical .611 as is his homerun to flyball ratio (22.2% compared to 10% in AA). He hasn’t gotten the near 50% ground balls as he has with Bowie but he is also trying to knock out some rust. Hopefully it isn’t a sign that he is still hurt and he is able to get at least one good appearance in before the end of the season. He is a perfect candidate to go to the Arizona Fall League (seven minor league players from each team go play for about a month in October) to try and get some of those lost innings back so he can come into 2022 feeling confident about his innings limit for the season.