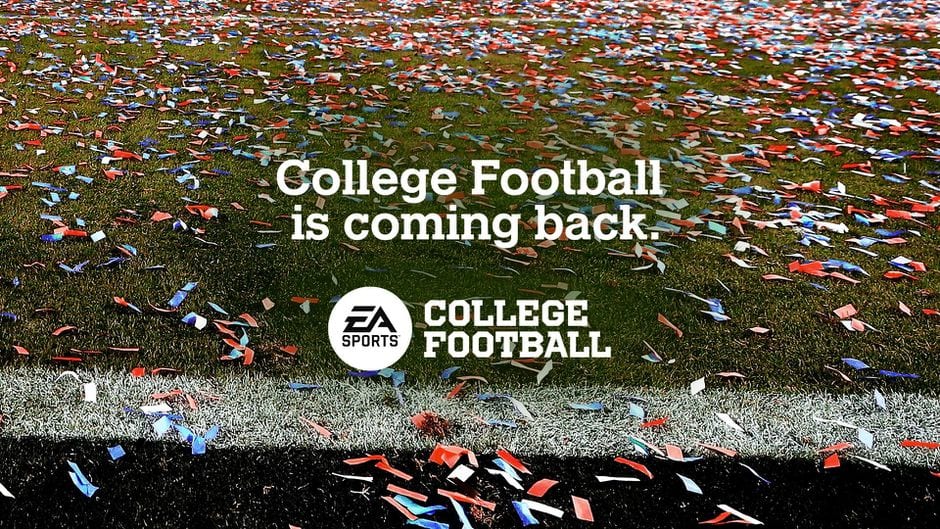 On Tuesday, EA Sports delivered fantastic news: college football is coming back. After last releasing a college football game in 2013, the eight-year wait for EA to bring back the game has ended.

EA’s last venture into the sport was NCAA Football 14, which had Michigan quarterback Denard Robinson as the cover athlete. That game was released for the PS3 and Xbox 360, meaning an entire generation of consoles have come and gone without a new game for college football.

The game ended over issues surrounding the usage of players’ likenesses, because it turns out, having an Auburn quarterback with uniform #2 who was 6-5, 250 pounds and mobile sure seemed remarkably similar to Cam Newton, however he was never paid for having a virtual doppelganger. Now, college football is back with a very notable difference in branding: the NCAA is nowhere to be seen.

As one of the many gamers who loved the college games and is thrilled to see they’re back, here are five questions I have about the newest college football game.

How will player likenesses work?

The NCAA Football games never used real player names, instead naming all players QB #2, WR #5, DT #99 and so on. However, anyone with a basic knowledge of college football would have noticed that Stanford’s QB had the same number as Andrew Luck and a dominant part of South Carolina’s defense sure seemed similar to Jadeveon Clowney.

There’s legislation that has the chance to give college athletes the chance to be compensated be appearing in video games and if so, the next college football game will provide a major improvement to realism if the next future NFL stud for Alabama is in the game under his real name instead of WR #5 or HB #10.

I’m not exactly a lawyer but it seems like there’ll be a lot of details that need to be ironed for how exactly this would work in terms of how players get paid, what they get paid and who’d qualify to get paid. This issue is definitely one to keep an eye on, especially regarding what the rosters will look like.

What teams are in the game and what can you do if your team isn’t there?

EA has said there are going to be over 100 teams available to use in the game, which is both encouraging and vague. There are 130 teams playing FBS football and if EA had all of them, they’d simply say there are 130 teams, so you have to wonder: what schools are getting the snub? It could be an entire conference, with perhaps the MAC or the Sun Belt being deemed unimportant compared to getting Alabama or Ohio State in the game.

There’s also the chance a bigger conference could be demanding more money than EA would be comfortable with for the rights to be in the game. If EA actually has the MAC and Sun Belt but couldn’t work out a deal with the Pac-12 or Big Ten, it’d make sense to frame the release as 100+ teams without being specific as to which conferences the 100+ teams are from.

Regardless, there hasn’t been any indication that FCS teams will be on the game, a feature from the PS2/Xbox generation of games that didn’t make it to the PS3/Xbox 360 versions. I’m sure fans of FCS powers like North Dakota State and James Madison are eager to use their squads but it doesn’t seem like they’ll be in the game.

That’s where the customization comes in. EA had an impressive website called TeamBuilder that allowed you to customize uniforms, colors and all the other bells and whistles associated with creating a college team from scratch.

What made the website especially notable was the ability to upload your own logos, so a fan of someone like NDSU could have their green-and-yellow bison instead of hoping a generic logo already in the game was similar. It was an incredibly immersive way to create an FCS team, your high school’s team, a fictional team and anything else you could think of.

I don’t see any reason why a new version of TeamBuilder wouldn’t return for the next game and if so, EA failing to have the entire FBS and any of the FCS will be annoying but still something that can be resolved.

How much control will there be over changing conferences and the postseason format in dynasty mode?

The landscape of college football is constantly changing and since the last NCAA Football game, college football has changed how it crowns a national champion. Additionally, the ACC welcomed Louisville and Notre Dame (for a year) while the Big Ten added Maryland and Rutgers. The most recent dynasty modes allowed people to rearrange conferences but what if you want to create a super conference merging the Pac-12 and Big Ten? Maybe you think we should put the entire MAC in the Big Ten to see if Northern Illinois can win the conference before the Fighting Illini do it. The flexibility of rearranging conferences can go a long way towards making everyone’s dynasty unique.

And of course, what you can do with the playoffs could make a big impact on how much fun a dynasty is. An eight-team playoff with an automatic bid for the power conference champions, the best Group of Five school and two at-large bids is regularly suggested as a way to expand the playoffs and it’d definitely be fun to try, especially if your dynasty is with a school outside of a power conference like Boise State, Cincinnati or UCF. It’d be especially interesting if they copied the FCS model and let you have the option of a 24-team bracket with eight teams getting a first-round bye. College football has always had the most unique postseason for better or for worse, so hopefully the next college football game provides some options for customizing how a national champion is crowned.

On NCAA 14, EA released its first version of Ultimate Team for college football, taking a mode that had already existed on Madden and FIFA.

The basic premise of the Ultimate Team mode is creating a fantasy team, combining players from different eras and different teams and competing with them both online and offline. The mode, along with similar modes on NBA 2K and MLB the Show has increasingly become the focus of sports games.

It’s easy to understand the appeal as someone who enjoys playing this mode on assorted games. On MLB the Show, I can start an outfield of Mike Trout, Ken Griffey, Jr. and Mickey Mantle while Madden lets me run an offense combining current players like Alvin Kamara with Hall of Famers like Tony Gonzalez. With a college football version of this, you could put Tim Tebow in an offense with Bo Jackson or see if Michael Vick is as dominant in college games as he is in Madden and of course, there’d need to be a 99 overall Lamar Jackson.

While the game modes are fun, there’s also the cynical nature of incentivizing people to buy packs with real money as a way to improve their team as quickly as possible. If you’re playing FIFA Ultimate Team, it could take you a while to acquire Cristiano Ronaldo just from playing the game but if you spend 20 dollars on packs, maybe you can acquire the Portuguese superstar from a pack. Buying packs with real money is basically gambling, hoping your real-life money will translate into a big reward on the game mode, giving you a rare and talented player most users won’t have.

The ability to make money from these packs has led to sports games giving less attention to things like franchise mode, knowing that Ultimate Team and its similar modes on other games are cash cows that far exceed the initial 60-dollar purchase of the game. While Ultimate Team is fun, it will create a sour taste in people’s mouths if the game mode seems to be clearly taking priority over dynasty mode, the biggest appeal of the game compared to playing Madden.

Who is the cover athlete(s)?

We still don’t know when the first game will come out so the cover athlete will remain one of the biggest mysteries for the new game. For all we know, it’s someone on Alabama who didn’t get any playing time this year but in two years from now will be a unanimous Heisman winner leading the Crimson Tide to another title.

There’s also an argument to make the cover athletes a group photo of everyone who should’ve gotten the chance to make the cover in the gap between games. A cover with Joe Burrow, Lamar Jackson, Kyler Murray and others would be a neat way to acknowledge their electrifying play in college and give them the one meaningful piece of recognition they missed out on as college players.

The group photo could also include players who didn’t win the Heisman but still made a memorable mark on college football. NCAA Football 08 put Boise State’s Jared Zabransky on the cover after their famous win over Oklahoma and NCAA Football 10 gave one of its four covers to Utah’s Brian Johnson, who led the Utes to a Sugar Bowl upset over Alabama. Based on this, it seems like McKenzie Milton, the QB for UCF’s 13-0 season in 2017, would be a perfect candidate.

The cover athlete will likely be one of the final decisions made for the game but also one of the most important. Whoever is chosen will get to be the face (or faces) of the exciting return of college football video games.