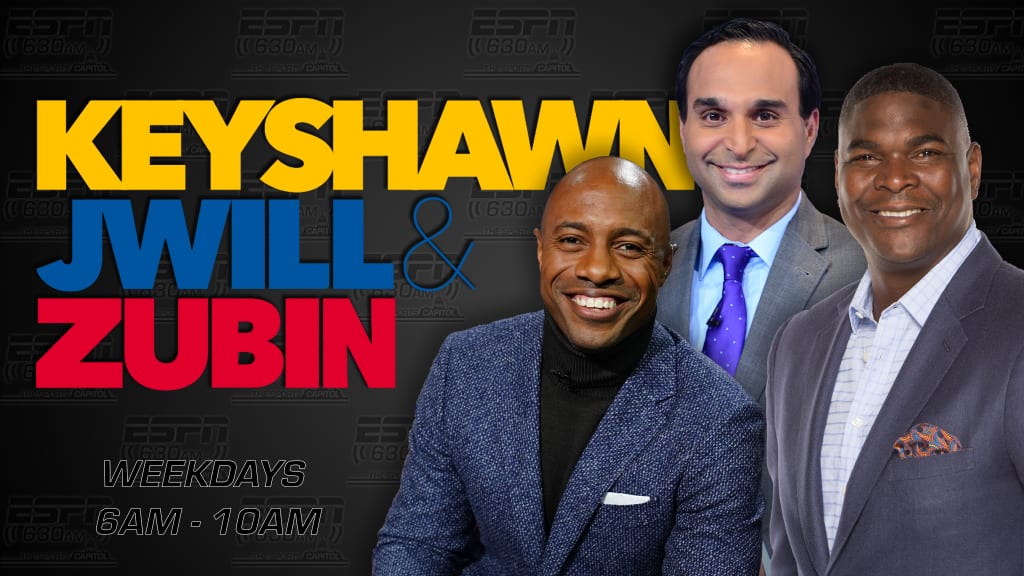 Around 7:50 a.m. Tuesday, ESPN Radio listeners got a wake-up call they may not have expected, but should have seen coming.

For the next 30 minutes, Keyshawn Johnson and Jay Williams, two-thirds of “Keyshawn, JWill and Zubin,” the new morning show, proceeded to school the listening audience on what it’s like to be Black in America in 2020.

And they used words like “coon” and “Uncle Tom,” that, if not graphic, are certainly not what the morning drive time gathering is accustomed to. It was searing and tough to listen to, but absolutely necessary given these times.

All over sports television and radio this week, race, the third rail of American society, the place that heretofore could not be broached, has been trampled over.

From Chris Webber to Michael Wilbon to Spike Lee to virtually everyone in between, millions of words have been spoken in the last few weeks about the state of race relations in this country, using sports as the launching point.

Welcome to the new normal of 2020, where the days of “shut up and dribble” are over. As USA Today’s Chris Korman wrote Thursday, “To be a sports fan in 2020 either means working to understand the grief and rage of Black athletes, athletes who have decided not to play the game they love in order to get your attention, or opting instead to be willfully ignorant. To refuse to hear the message is to choose the side of the status quo, and the systemic racism that pervades our country.”

The confluence of the most racially contentious president in modern times and his quest for re-election, the “Black Lives Matter” movement and repeated violence against people of color committed by police officers with little repercussion has touched off a torrent of commentary.

And those conversations have been tailor-made to ESPN Radio with its new lineup. Indeed, if ESPN executives were seeking validation for their decision to overhaul their talk radio batting order —  and particularly their morning show —  they probably got it in the last two weeks.

With Johnson, the former New York Jet/Tampa Bay receiver, and Williams, who had a brief, injury-marred NBA career before becoming an excellent NBA and college commentator, providing heat and some light, the new morning show – with “SportsCenter” anchor Zubin Mehenti in the third chair — has gone in directions that its predecessor, “Golic and Wingo” could never have dreamed of.

That’s not to say that Trey Wingo and Mike Golic, Sr. couldn’t have had or led an intelligent discussion about race in sports. But as the winds of wokeness blow through athletics, the image of middle-aged White men going on about conditions for minorities with few, if any minorities participating in those chats would be inauthentic at best.

Indeed, some of the other spot-on conversations about race on the new ESPN Radio have come during its afternoon drive time show, helmed by WNBA player Chiney Ogwumike and Mike Golic, Jr., who had co-hosted “Golic and Wingo.” The pair, both under 31, bring a Generation Y perspective to the topic, that is refreshing.

Ironically, the sports conversation on race hits ESPN at an interesting time, as the company is in the midst of an internal discussion about who can speak honestly about racial issues.

According to a Wall Street Journal article last month, “SportsCenter” anchor Sage Steele raised a complaint with ESPN President Jimmy Pitaro that she was prevented from participating in a June special on race.

Steele, who is biracial, reportedly told Pitaro that she was kept from the special, which touched on race and sports after the killing of George Floyd by Minneapolis police in May, by fellow anchors Elle Duncan and Michael Eave,

Their reasoning, according to Steele, was that her previous social media postings and stances were insufficiently supportive of the Black community.

In a statement to the Journal, Steele said “I found it sad for all of us that any human being should be allowed to define someone’s ‘Blackness.’ Growing up biracial in America with a Black father and a white mother, I have felt the inequities that many, if not all Black and biracial people have felt—being called a monkey, the ‘n’ word, having ape sounds made as I walked by—words and actions that all of us know sting forever. Most importantly, trying to define who is and isn’t Black enough goes against everything we are fighting for in this country, and only creates more of a divide.”

Kevin Merida, the ESPN executive in charge of The Undefeated, a platform that focuses on race, sports and culture, told the Journal, “At The Undefeated, we don’t have litmus tests for Blackness. ESPN has a tremendous range of Black voices, and we’ve been honored to work with many of them. We had already talked to Sage a number of times about working together, and look forward to that opportunity.”