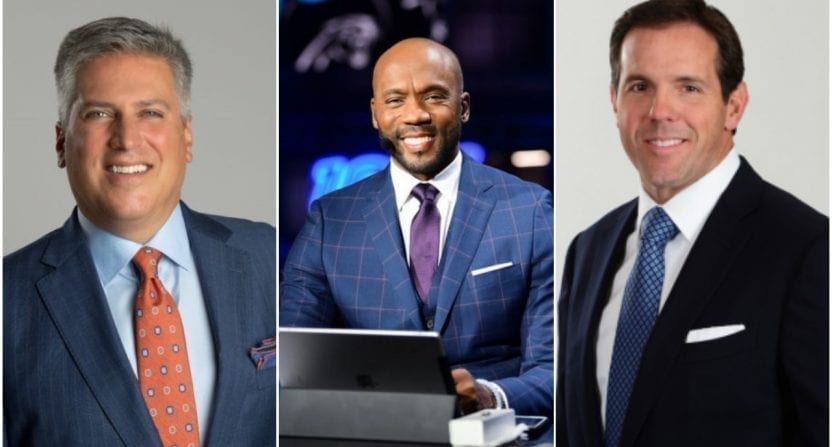 So much for all the chatter about recently retired quarterbacks, broadcasters from other networks, or anyone generally outside of the expected choices. Earlier this week, ESPN’s choice for the next Monday Night Football booth was reported as the trio of Steve Levy, Brian Griese, and Louis Riddick, a choice that could be abandoned if there are even more significant changes to this fall’s college football schedule.

The decision to go with Levy, Griese, and Riddick won’t exactly excite fans. Griese has been a fine college football analyst for years. Riddick is light on game calling experience but is a well-liked NFL studio analyst whose profile has only continued to grow as his role has been expanded. As for Levy, he has been a SportsCenter host for years upon years, but his transition to a play by play role has been somewhat recent and overall reviews have been somewhat mixed (ESPN has still given him plenty of high profile college football matchups, however).

(You can this discuss this on the BSL Board here.)

It feels like this is a placeholder decision from ESPN. Levy and Griese have had limited work on NFL game broadcasts, though the two did work together with Riddick on the second half of ESPN’s Week 1 doubleheader in 2019. If the trio simply doesn’t work out, it would be easy for ESPN to pivot to another broadcast team in 2021 while essentially blaming the COVID-19 pandemic for their decision for the 2020 season. And that decision would hold some sort of water, given that all three broadcasters are already under the ESPN umbrella and that the network wouldn’t be shelling out significant new money to bring in new MNF broadcasters. Theoretically, ESPN would have more money to dish out next year if they wanted to bring in someone like say, NFL Network’s Kurt Warner.

To me, this decision would represent more of a gamble for ESPN. Fowler and Herbstreit are so established with ESPN’s college football brand that shifting them to MNF may be a situation where the network is trying to fit a square peg in a round hole. Will the duo’s college football style work on NFL games? Hell, will they be effective at calling the NFL game rather than college football, given that the two have some fundamental differences? Furthermore, if they’re well-liked and well-received by viewers, will ESPN actually switch them back to college football in 2021 and start the MNF merry go round once again?

I think that last point may be the most relevant here. What does it say to fans, employees, and even the NFL and NCAA if Fowler and Herbstreit are placed on MNF for just the 2020 season? Would it imply that they’re more valuable on college football than the NFL, seemingly implying that the NFL is a less valuable property to ESPN? Would it say to fans that the new broadcast booth, especially if it’s made up of existing ESPN employees, just wasn’t good enough a year ago? The same could be said for the new booth: would they be okay with their employer circling back a year after going in another direction? And if the Fowler and Herbstreit booth actually is a success and becomes the new MNF team, then why in the hell were they calling college football games for years while the MNF booth was a game of musical chairs? Plus, ESPN would need to establish a whole new top college football booth or have Fowler and Herbstreit (or one or the other) pull double duty each weekend in the fall, neither of which would be an easy task.

If anything, the potential of a Fowler/Herbstreit booth makes the reported Levy/Griese/Riddick trio more appealing to me. If that booth doesn’t work, then you can just blame the pandemic, flush it, and move on. No harm, no foul. There will be little blowback for that decision, aside from maybe going with a less sexy choice that doesn’t get the take machine fired up (SEE: Witten, Jason and McFarland, Booger). And if the booth does work out, then great! The MNF broadcast booth crisis is over and we won’t need to do the Peyton Manning song and dance every spring.

There are possible pitfalls in whichever direction ESPN eventually decides to go in. But while there is less upside with the Levy/Griese/Riddick trio, there is arguably less downside, as well. And in an era where every decision the network makes is scrutinized to its core, don’t you want the safer choice to win out?