Is Eugene Monroe Worth Investing In? 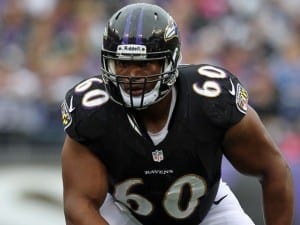 After the signing of Dennis Pitta, Ravens fans turned their focus to the next UFA priority: Eugene Monroe.  While Monroe has gotten a good deal of praise this off-season (PFF’s #1 rated UFA Offensive Tackle), Jacksonville didn’t appear too concerned with his departure mid-2013.  The Ravens let the Franchise Tag deadline pass them by and there is now conjecture about whether the Ravens have Monroe in their future plans.  Is Monroe the type of tackle you hitch your wagon to?  After watching most of his snaps for the Ravens, I think the answer is YES.

For discussion and comments, head to our Message Board.

We all know that Gary Kubiak’s offense will feature a healthy dose of the Zone Blocking Scheme.  As I’ve mentioned before, the Zone Blocking Scheme asks the offensive linemen to work in concert to create creases and cut-back lanes.  Monroe is very good in his run blocking technique and plays with neighboring guards well.  When blocking on the play-side (i.e. run call to the left), Monroe moves laterally with his assigned defender, which provides space for his running back to visualize the hole.  Monroe is not a powerful blocker and he rarely displaces players by simply mauling them.  But in the Zone Blocking Scheme, this type of blocking is relatively unimportant when compared to repetitive technique and an understanding of leverage.

Monroe really only has issues with run blocking when on the back-side (i.e. play-call to the right).  Without elite movement skills, he rarely reaches a back-side linebacker at the second level and when cutting off a back-side defensive end, he can get lazy with his feet.

Monroe has the physical ability to be a solid run blocker who projects as a prototype Zone Blocking left tackle.  Monroe’s lack of explosion and pulling expertise will be minimized while Zone Blocking.

Monroe does not have a Bryant McKinnie-type size.  Monroe has a 6’5″ 320lb frame without a bulky upper body.  He therefore relies on technique and positioning to succeed.

Monroe has a very good set.  He rhythmically moves his feet in a controlled manner to get up-field and cut off potential edge rushers.  He is rarely caught out of position.  When defenders tried to bend the edge against him, Monroe was fantastic at pushing them past/around the quarterback.  Against inside counter-moves, Monroe was quick to shift his weight and force defenders into traffic.  Monroe’s excellent body control allows him to move flexibly in the “mirror” phase.  Blocking a defense’s best edge rusher play after play is an unenviable job but Monroe did it with amazing consistency.  Monroe’s “recovery” phase, even against great defenders, was top-notch:

Monroe is tasked with blocking stud defensive tackle Ndamukong Suh.  Monroe engages Suh immediately post-snap and never relinquishes. Image #2 shows Monroe playing with a strong base, good arm positioning, and an arched back.  Monroe is not over-extended or trying to land a big blow with this helmet.  Monroe is exceptionally consistent with his technique and even after an attempted “arm-over” move, Suh is unable to shed his block.

At left tackle, Monroe is often blocking the defense’s best rusher by himself.  Throughout the games I watched, defenders became visibly frustrated after Monroe consistently won this battle.  As a counter-move, defensive coordinators would call stunts and games to a) introduce confusion and b) force Monroe to work in concert with the Ravens sub-par left guard, A.Q. Shipley:

Monroe dependably handled stunts to his side with ease.  It was remarkable how calm he was deciphering some of the more complex aspects that tackles have to deal with.

Monroe in the Kubiak/Castillo Protection System

I have spoke of Monroe’s comprehensive skill-set glowingly.  But each offensive system asks it’s offensive linemen to do slightly different things.  Is Monroe a good fit for the 2014 Ravens?

Gary Kubiak loves to use Play-Action, Boot-Action, and a rolling pocket as tactics to keep his quarterback clean.  Moving pockets will be a welcome sight for Flacco after dealing with a shoddy offensive line in 2013. Eugene Monroe, as mentioned above, is not a bulldozer, but few bulldozers fit the Zone Blocking Scheme.  So Kubiak instead uses a series of different protection calls that play to his linemen’s strengths:

To sell Play-Action, the lineman use a “jump set” meaning they attack their assigned defender rather than patiently waiting.  This fits nicely with Monroe’s skill-set because he can fire out and engage a defender.  This allows him to simply “recover” or “re-anchor” until the ball is away.  This keeps defenders from getting a running start and barreling into Monroe.

This gets into where I think Monroe may struggle.  Juan Castillo is known for preaching the “vertical set” meaning his offensive tackles retreat almost directly backwards in pass protection.  This is a small variant on the more popular style of “kick-slide” protection.

Is Monroe Worth the Money?

When one pictures the best free agent left tackle on the market, they picture a dominant road-grater who can impose his will in both pass-protection and in the running game. But the league has changed to where technique and agility are greater assets for offensive linemen. Consistency is Monroe’s greatest asset, and I believe that his strengths are a perfect match for the Ravens moving forward.

Dan played high school football at Wilde Lake and graduated from McDaniel College with a degree in Psychology. Dan is currently a Maryland Terp working on his PhD degree in Neuroscience. He has experience writing published scientific material as well as blogging for SBNation via Baltimore Beatdown. Beginning in the 2012 season, Dan has been writing about the Ravens focusing on the X’s and O’s of the game of football with heavy use of overhead (All-22) film analysis. The Columbia, MD native currently lives in Silver Spring.