The Experience of Watching MMA Front and Center 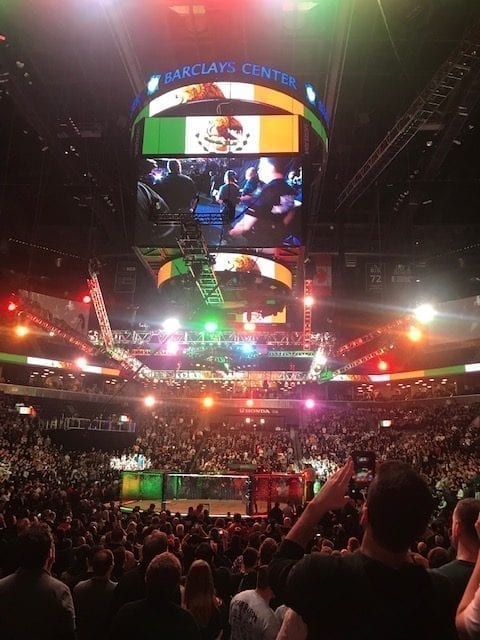 Last weekend’s UFC event was notable for a few reasons. It was the first ever MMA event broadcast on ESPN following the start of their five year, $1.5 billion TV deal. At least the prelims were as it was also the launch of the UFC on the relatively new ESPN+. Disney’s sports branch is dipping their toes into the streaming world in an attempt to future proof their product as they face declining cable subscriptions. (They lost two million subscribers in 2018 and have lost 15 million since 2011.) The UFC is a big part of their plans as they shift in that direction and it seems to have paid off so far. They added 568,000 subscribers to ESPN+ last weekend and had their best preliminary card TV ratings since 2013.

The main event was a rare champ versus champ super fight (although lets be honest, its getting rarer all the time). Bantamweight champion TJ Dillashaw dropped down in weight to challenge the flyweight king Henry Cejudo for his belt. Every other time this has happened its been the champion in the lower weight class moving up. Cejudo came out on fire and knocked Dillashaw down multiple times and never gave him a chance to recover as the referee stopped the fight 32 seconds into the first round. Its the first time the champion whose weight class they were fighting in has kept their belt since Georges St. Pierre beat BJ Penn in 2009. Its ironic that the first main event on ESPN ended in a quick stoppage. In November 2011 Junior Dos Santos knocked out Cain Velasquez to win the heavyweight championship on the first ever event aired on FOX in about a minute. At least this time they built an entertaining card around it.

The last notable thing, at least on a personal note, is that I was able to take it all in live at the Barclay’s Center in Brooklyn, New York. It wasn’t the first time seeing the fights take place in person. That would be last April in Atlantic City, New Jersey for an event headlined by Kevin Lee vs. Edson Barboza. The problem with that experience was that it was less than a week after my grandmother passed away, I drove the three plus hours each way in the same day, and I had the flu. The fights themselves were still good and we had good seats, two rows back in the second deck at the center of the cage. Not close but able to see over the top of the cage for a good view. Last weekend we had more expensive seats but from what I hear that doesn’t necessarily mean better. Luckily for us it did. We were seven rows back from the floor seating. Close enough to get a good sense of the violence on display and hear the slap of the kicks. But far enough back on the incline to get a full view of what was going on.

The crowd was better in Brooklyn and that made a big difference. In Atlantic City there were fights breaking out in the stands left and right. Luckily not near where I was sitting. None of that this time around. Just an audience that filled up pretty early and was heavily invested in the fights at hand. There are three moments in particular that stood out. The first (and best) pop of the night was for Donald ‘Cowboy’ Cerrone, always a crowd favorite. It was loud from the moment he walked out to his patented Kid Rock anthem, which is about the only way I’ll ever enjoy a Kid Rock song, and only increased in intensity as he dominated the trash talking up and comer Alexander Hernandez culminating in an explosion when he knocked him out. The only other time I’ve been a part of a crowd that loud was when Delmon Young hit a bases clearing double in game two of the 2014 ALDS to take the decisive lead against the Detroit Tigers en route to sweeping them and advancing to the ALCS. It was awesome.

The next moment that stood out was the co-main event when former NFL player Greg Hardy lost amid controversy due to an illegal knee to a downed opponent, Allen Crowder. Controversy might as well be Hardy’s middle name with how much is involved every time his name comes up. Controversy that he was signed by the UFC at all with no experience other than beating up his girlfriend (allegedly? He was convicted but the charge was ultimately thrown out when she didn’t show up to court) and a few bums in amateur bouts. Controversy that he was booked on the same card as Rachel Ostovich, who was just the victim of domestic abuse herself a few months prior. Controversy that he was given the co-main event slot over so many more deserving fights/fighters. The crowd hated him. Loud boos, cheers whenever Crowder did anything remotely positive, and chants of “asshole” after he was disqualified like it was a Maryland basketball game in the 2000’s.

Capping things off was the short but shocking and electrifying main event. One of the things the UFC does that I think is really cool but doesn’t always translate on TV is during the walk outs for the main event they give each fighter their own special graphics on the video boards to make them stand out. You could feel the anticipation in the arena mounting as the fighters were introduced by Bruce Buffer. Once he shouts out his patented “it’s time!” everyone knows… it’s time. Cejudo, the gold medal winning wrestler, came out aggressively striking which must have surprised Dillashaw who does his best work on the feet. He caught him early and often, at one point even pushing TJ to the ground. He was accurate and relentless putting on the finishing touches on the ground. Dillashaw complained that it was an early stoppage but that’s typical of him. He’s always been a poor loser. When he gets knocked out, the referee stopped the fight too soon. When he loses a decision, the judges got it wrong. Watching replays the next day just confirmed that while maybe the ref could’ve waited another punch or two to make sure, there was nothing controversial about it. This was not a Greg Hardy situation.

We didn’t hang around to hear the post fight interviews. 12,000+ people trying to find their way home (or wherever they’re staying in New York) at 12:30 AM wasn’t a prospect we wanted to endure. But despite getting an early jump on the exit it took us around 30 minutes to get an Uber and make our way back to our Airbnb. That brings me to the downsides of seeing the fights live. Watching a big event or Pay-Per-View at home the adrenaline is still lingering in your body and you can immediately watch replays, post fight shows, read Twitter updates, etc. to wind down instead of rushing to find a way out. Another thing is even with the best seats its hard to follow what is going on when a fight hits the ground. You end up watching the big screen monitors despite the action taking place right in front of you. I’ve never understood the fans in attendance when they would boo a fight that is on the ground when the combatants are putting on a good display of wrestling or jujitsu skills. Well now I do. While I didn’t boo I found myself bored during two fights that were wrestling heavy, Joseph Benavidez vs. Dustin Ortiz and Gregor Gillespie vs. Yancy Medeiros. When I watched the event back a couple days later I realized that they were actually pretty good fights.

It is a long night especially if you show up for the first fight. I can’t think of many other sporting events that have you sitting there for around seven hours. I can’t think of many other sporting events that require that kind of time commitment except maybe a day at the racetrack or if you’re staying all day for a tennis event. When you’re at home you can choose to start watching whenever you want. Skip fights if you want to. Feel comfortable to roam your house as the fights take place. But all in all I would highly recommend going to a live UFC event at least once even if you’re just a casual fan. The cost isn’t prohibitive for decent seats. You get a real sense of the size, speed, and power that these guys and gals are competing at and it gives you a greater appreciation of not only the skill on display but the risk that they’re putting themselves in to try to work their way to the top of the sport. The atmosphere can be great and even the pacing feels better live. They do a good job of filling empty space. I had such a good time in Brooklyn that I’m looking to buy tickets for the event in Philadelphia on March 30th. Hope to see you there.