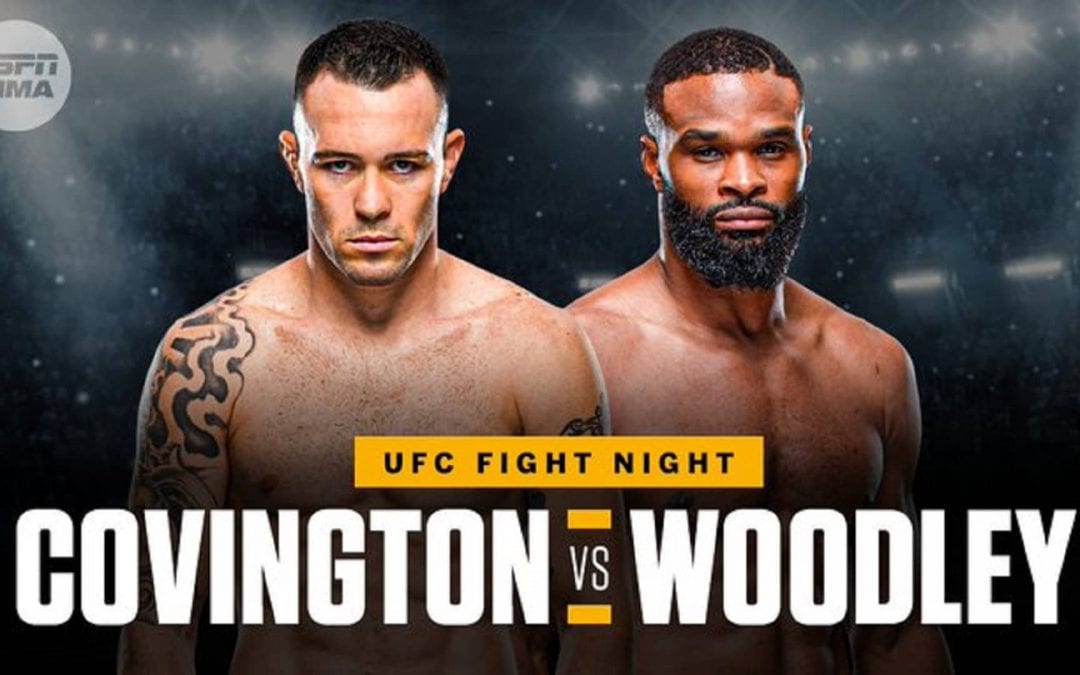 The UFC is in the midst of a stretch of 16 straight weekends with a fight card on the schedule. While every other sports league has suffered from the Coronavirus pandemic the UFC has found a way to not only effectively manage their events but has thrived in these unprecedented times. The quality of each individual card is way down with international travel restricted but they have still been able to schedule some fantastic fights in the months coming up this fall. Here I’m going to single out six of them that are particularly interesting and explain why they deserve every fight fan’s attention.

For a long time this seemed like a fight that the UFC was building towards while Woodley was the welterweight champion. It had a chance to be the biggest 170 pound title fight since Georges St.Pierre vacated the belt as long as Covington was able to not take things too far (right) with his Trump obsessed MAGA schtick. Instead they’ll meet in much different circumstances as Covington tries to rebound from his loss to champion Karamu Usman. It was competitive bout so a win here could get him right back in the title picture. Woodley is coming off back to back losses of his own after losing his belt to Usman in a one sided affair and then getting shut out in the follow up. While the stakes aren’t as high as fans would like it is still an interesting style match-up that would appear to have only two possible outcomes. Either Woodley connects with one of his patented overhand rights or Covington puts constant pressure on his opponent, stifling his offense en route to a unanimous decision victory. As much as I would love to see Woodley put his lights out I just haven’t seen enough from the former champ lately to think he can prevent Covington from putting it on him for five rounds.

This is the fight I’m most looking forward to. A very rare bout between two young undefeated fighters in a match-up for the title. In this case it is the middleweight belt on the line. Adesanya has become an up and coming star on his way to winning and then defending the 185 pound title. He beat Kelvin Gastelum in a fight of the year candidate to win the interim belt while Robert Whittaker recovered from an injury. Once he recovered Izzy made quick work of his to consolidate the belts, knocking him out viciously in the first round. He had his stock drop a touch his last time out eking out a close decision against Yoel Romero in his first title defense. It was easily his least entertaining fight but Romero is incredibly dangerous and both of them were looking to counter for 25 minutes. I may regret saying this but I don’t see any a fight with Costa can be boring. He is constantly moving forward and trying to knock his opponent out, which he usually does. Adesanya will have to rely on his kickboxing experience to evade and counter Costa’s aggression. No matter who comes out on top I bet this isn’t going to be the only time these two enter the cage together.

When this fight was announced it seemed obvious that it was to see who would get to fight Jon Jones for the light heavyweight championship. And in that case it would’ve been an entertaining top contenders fight. But instead news broke shortly after that Jones would be vacating his title and making a run in the heavyweight division. All of a sudden this went from a top contenders bout to a fight for the real belt. Reyes’ last fight was against Jones for the championship and it couldn’t be any more competitive. I scored it for Reyes but it was incredibly close and the judges gave the defending champion the nod. The UFC has to be hoping Reyes gets his redemption. Blachowicz is a really good fighter and has improved a lot over his UFC tenure but from a marketing standpoint its not even close when it comes to who could be the new face of the division. Inside the cage it should be a competitive fight with Reyes having a slight advantage on the feet and Blachowicz better on the mat. Thiago Santos is healthy and fighting Glover Teixeira also in September, if both him and Reyes win that is an enticing match-up for early 2021.

The featherweight division has stagnated a bit with current champion Alexander Volkanovski and former champion Max Holloway in a protracted rivalry over back to back fights. With Volkanovski surprising everyone to win the first match and take the belt from the arguable best featherweight of all time (according to UFC commentator Joe Rogan) and then Holloway getting robbed (in my humble opinion) in the rematch, there is actually a chance that they run it back for a third time before any other contender gets their chance. Whether its next or after a rare instant trilogy it should be the winner of this fight that gets that shot. Ortega hasn’t fought since losing to Holloway almost two years ago. He didn’t just lose, he took a ton of damage over four rounds before having the fight stopped before he could come out for round five. It was the first loss of his career and he’s still young enough to rebound. ‘The Korean Zombie’ had a rough title shot loss of his own in 2013 against Jose Aldo before going away for mandatory military time for South Korea. His only loss since coming back was the epic buzzer beater knockout he suffered at the elbow of Yair Rodriguez in a fight he was literal seconds away from winning. Bad blood has been building between this two over the course of 2020 to add another layer of spice to the bout.

To me Khabib is the current number one pound for pound fighter on the planet. I had it as Jon Jones until his last couple lackluster outings when I thought he should’ve lost to both Dominick Reyes and Thiago Santos. He may not be my favorite fighter in the sport but Nurmagomedov is relentless in his ability to make great fighters seem subpar. We thought we were finally going to get to see the long awaited fight between him and Tony Ferguson, the guy everybody thought might have the only style to take out Khabib. Well Justin Gaethje stepped in when the pandemic kept Khabib in lockdown and took the crown of pure violence and craziness that we want to see if the Dagestani can walk through. Gaethje has ridiculous power in his hands, is a good wrestler in his own right, and has the mindset of you’re going to have to kill him to get him out of a fight. It will be interesting to see if the recent passing of Khabib’s father will effect him inside the Octagon. There is talk that if he is successful in this title defense he may fight GSP or someone else to try and end his career at 30-0. He is one guy I could see walking away in the relative peak of his career.

Figueirdo has had fight fans confused as to how to feel about him in 2020. When Henry Cejudo vacated the flyweight title it seemed like a good opportunity to finally have fan favorite and all around good guy Joe Benavidez win a championship. He will forever be known as one of the best fighters to never win a belt after his saga with Figueirdo. The Brazilian power puncher missed weight in their first fight and then knocked out Benavidez following an incidental headbutt. You can’t win a belt having missed weight so the rematch was booked and the result was the same minus the controversy. So with an exciting style but having just smashed the dreams of a well liked opponent, Figueirdo will now defend the 125 pound championship against former bantamweight champion Cody Garbrandt. It will be ‘No Love’s’ flyweight debut and add some much needed name value to the lowest men’s weight class. Garbrandt schooled all-time great Dominick Cruz to win the 135 pound belt but started feeling himself and proceeded to suffer three consecutive knock out losses before coming back a couple months ago to score a highlight reel knockout of his own over Raphael Assuncao. I don’t see any way that this fight makes it to the judges considering both of their fighting styles. It should be a ridiculous fire fight ending with somebody flat on the canvas. Only one of them has proven to have a granite chin so I will predict that the belt doesn’t change hands. Doesn’t mean I want to see it any less.