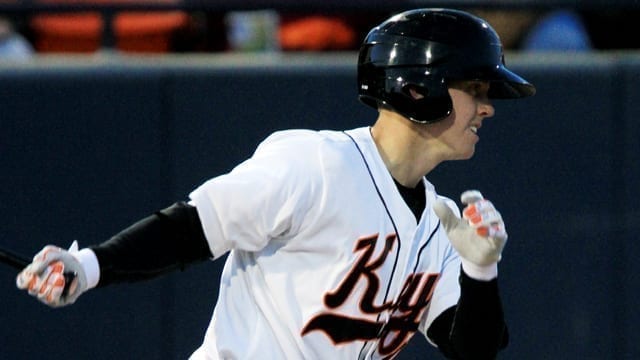 For the Baltimore Orioles’ full-season minor league affiliates, the start of the 2017 season is a little more than a week away. All four full-season clubs will begin their campaigns on April 6, and among those teams there will be plenty of storylines to follow.

To preview some of the notable developments that could take place, this post looks at the five storylines to watch, ranging from the development of the Orioles’ most highly-touted prospects to some questions about additional players. With spring training winding down and the regular season about to begin, these stories should only become more intriguing over the coming months.

The Emergence of Chance Sisco

Few Orioles prospects match the hype of Sisco, whose expectations may only be higher following his spring in big league camp. Over 17 games, he went 7-for-24 (.292) and logged 49 innings behind the plate in 12 games as a catcher.

As he heads to Triple-A Norfolk, Sisco will look to build on his impressive offensive track record while continuing to improve his defense. The Orioles’ off-season signing of Welington Castillo means that the club does not have room for him right now, so Sisco’s assignment to the minors should be expected to last for the time being.

That said, Sisco could become one of the first players the team calls upon if, or when, it needs an option behind the plate in the event of an injury. Even without an injury, Sisco could arrive in Baltimore late in the year if his track record—which includes his .323/.402/.434 triple-slash line across 1483 plate appearances—carries over to 2017, making it hard for the Orioles to justify not giving him a chance in the majors.

The top pick in the Orioles’ 2016 draft class, Sedlock enters the season as arguably the Orioles’ best pitching prospect. He will look to build on his solid professional debut, which saw him post a 3.00 ERA in 27 innings over nine starts at Short Season-A Aberdeen.

With his full-season debut approaching, most observers feel that Sedlock could have the ceiling of a mid-rotation starter. No official decision has been made on where Sedlock will be assigned, but Low-A Delmarva or High-A Frederick could be options, with the latter being well in the realm of possibility given that Sedlock was drafted from a major Division I program—the University of Illinois—less than a year ago. Regardless, the Orioles and Sedlock will hope that he turns in a healthy season, and is able to advance in the organization’s depth chart.

After turning in disappointing 2016 campaigns, a few prospects will be looking to get back on track in 2017. Third baseman Jomar Reyes entered last year among the club’s best offensive prospects, but failed to translate his solid 2015 season at Delmarva into a successful 2016 at Frederick. Having just turned 20, however, Reyes still has time to develop, and might be able to hone his raw power and produce better numbers at the plate in his second stint in the Carolina League.

On the pitching side, perhaps the bounce back candidate with the most potential is Chris Lee. The left-hander made it through just eight appearances (seven starts) last season at Double-A Bowie before suffering a season-ending shoulder injury. During his time in major league camp this spring, Lee showed promise over a limited sample size, striking out 10 batters in 13 innings while posting a 2.77 ERA. Lee, who has been optioned to Norfolk, will need time to work his way back into regular season action, but he could reach Baltimore at same point this season if he remains healthy. In fact, manager Buck Showalter indicated to The Baltimore Sun after Lee was optioned that he could be recalled to join the Orioles in mid-April if the club needs a fifth starter.

After having Tommy John surgery last year, the often-injured former top pick will begin the season on the disabled list as he continues his rehab. It will be at least a few months before Harvey is back on the mound and pitching in game action, but the Orioles hope that he will return at some point during the 2017 season.

Even though his five appearances between the Gulf Coast League and Aberdeen last season account for his only action since 2014, Harvey remains an intriguing prospect for many. After being selected in the first-round of the 2013 draft, the right-hander displayed top-of-the-rotation starter potential in the minors. The fact that injuries have stalled his progress has tempered the expectations for Harvey, but the emergence of Dylan Bundy—another former top pick who had Tommy John surgery, and encountered numerous injuries along the way—last season shows that patience can sometimes pay off.

If Harvey does return this year, expect the Orioles to take a conservative approach. It would be good for the organization to have him on the mound once again, and the Orioles will need to do what they can to ensure that Harvey can start to put his injuries behind him.

Will there be an Orioles prospect that significantly boosts his stock with a break out season? That remains to be seen, but there are a few players that could receive more attention as the year progresses.

Ryan Mountcastle turned in an impressive full-season debut at Delmarva last year, and will look to follow that up with a strong year at Frederick. At 20, Mountcastle will have his work cut for him in the Carolina League, but displays the potential to put up solid power numbers.

Jay Gonzalez and Cedric Mullins will also warrant attention, but they will not be the only outfielders to keep an eye on this season. A third-round pick in last year’s draft, Austin Hays had an excellent debut at Aberdeen last season and stands a chance at moving through the system this year. Fellow 2016 draft picks Keegan Akin and Matthias Dietz will also look to have solid full-season debuts, and boost their stocks among the Orioles’ pitching prospects.