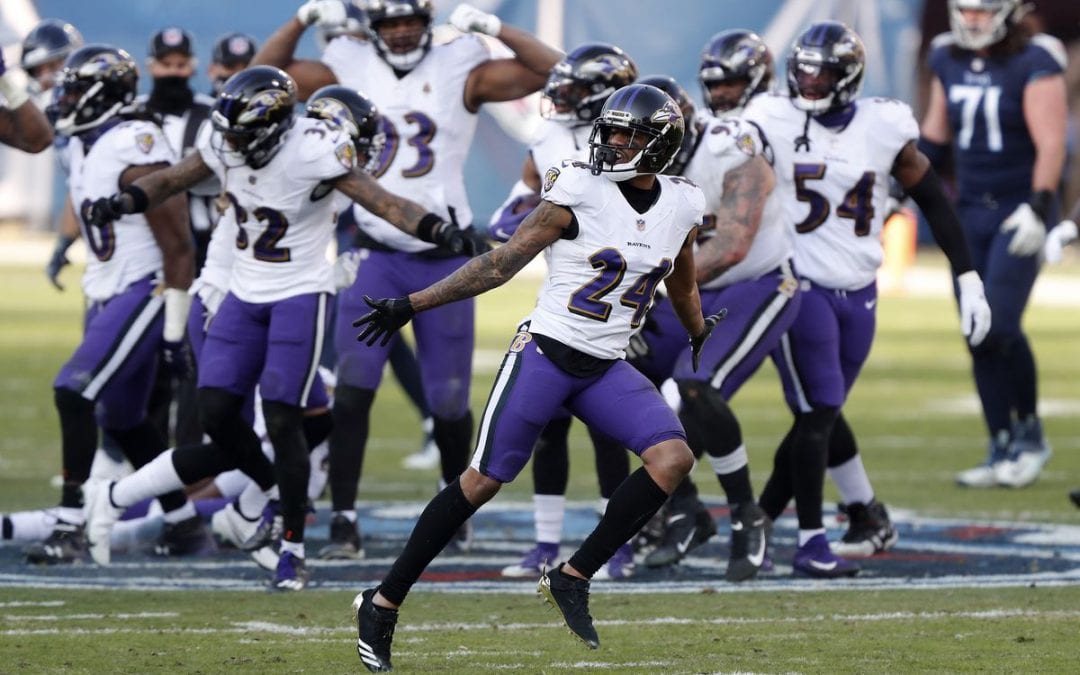 If you felt a breeze blowing through Baltimore at around 3:45 on Sunday afternoon, it was the collective sigh of relief from the Ravens organization.

Of course, there is work left on the docket and the Ravens are far from satisfied but Sunday’s 20-13 triumph over the Titans certainly checked off plenty of boxes that have been left conspicuously empty for the last few years.

Get a playoff win for the first time in 6 years? Check.

Clear the psychological hurdle of the Titans? Check.

A Lamar Jackson-led team wins a game when trailing by double digits? Check.

The showdown at Nissan Stadium did not quite unfold as many envisioned. Rather than a Madden-like game between two of the league’s best offenses, we were instead treated to an old-school, physical contest between two teams that clearly don’t like each other. Instead of Derrick Henry struggling to find space against Campbell, Williams and company; it felt an awful lot like Eddie George struggling to find space against Adams, Siragusa and company. There was clear animosity between the two teams from before kickoff (Calais Campbell chirping at the Titans during warmups) to after the final whistle (Lamar Jackson imploring his team to leave the field immediately after the game) with a defensive logo stomp in between. In the midst of all that tension was a Ravens team that was exorcising some demons.

The Lamar Jackson narrative has been on repeat since this time last January; 0-2 in the playoffs. Things did not look great in the early going for Baltimore. It started with a quick 3 and out after a Mark Andrews drop on 3rd down (where Jackson missed a wide open Hollywood Brown). Then, after a Titans touchdown, which featured a controversial no call on what appeared to be a clear offensive pass interference, Jackson threw one of the worst passes of his career that led to a Titans interception. The Baltimore Ravens fanbase could only have been thinking one thing at that point; we’ve seen this movie before.

However, the 2020 Ravens flipped the script.

The turning point in the game came with 14 seconds left in the 1st quarter. Having gained a paltry 19 yards on 8 offensive plays thus far, the Ravens faced a 3rd and 7, along with the prospect of putting their defense out on the field again. While avoiding pressure from a corner blitz, Jackson rolled right and fired a strike to tight end Mark Andrews for a 17 yard gain and a 1st down.

What could’ve been another disastrous 3 and out, turned into a 12 play drive, ending in a field goal to make it a 10-3 game.

The importance of that drive was not so much the end result but rather that it served to settle the game down. While the offense gained a touch of confidence and laid the foundation for the remainder of the afternoon, the defense was able to catch its breath in preparation for putting together, arguably, their best 3 quarters of football all season.

For as much as the narrative was about Lamar Jackson’s playoff record, the secondary narrative was about the Ravens defense and their inability to contain Tennessee’s star running back, Derrick Henry. Ravens fans know, all too well, what Henry has done to Baltimore in the last calendar year; 58 carries, 328 yards, a walk off touchdown in overtime and even a passing touchdown. Instead of continuing to be the punching bag for Derrick Henry, the Ravens reached into their past for a defensive effort that was reminiscent of the dominance of the Ray Lewis led units at the turn of the century. Wink Martindale’s defense allowed only 209 yards of total offense, 13 points total and only 3 points in the final 3 quarters. All the while, limiting Henry to a meager 40 rushing yards on 18 carries. The defense played disciplined, occupied gaps, set the edge, shed blocks, did not over pursue; simply put, everyone did their job. The exclamation point on a marvelous defensive effort was a Marcus Peters interception at the 2 minute mark of the 4th quarter to squelch any inkling of a Titans comeback.

On the ensuing possession, after a head scratching call to throw the ball on 1st down, Lamar Jackson seemingly decided that enough was enough. With 1:45 on remaining on the clock, standing in the shotgun, Jackson took the snap, faked the inside handoff to Gus Edwards, then took off. Behind the pulling Bradley Bozeman and through a gap sealed by wide receiver Willie Snead, Jackson sprinted down the sideline and in doing so, cast off the weight of the previous 2 playoff disappointments. In that moment, the jubilance alone the Ravens sideline was palpable. They knew they were moving on and, maybe even more importantly, they knew their star quarterback had finally gotten himself, and the organization as a whole, over the hump.

For Lamar Jackson, Sunday afternoon in Nashville was the moment that many fans and media had been waiting for. While his passing numbers were far from eye popping (17 for 24, 179 yards, 1 INT), what he did with his legs was truly special. On the way to racking up 136 yards on 17 carries, Jackson had an electrifying 48 yard touchdown run near the end of the 1st half that undoubtedly shook the will of the Titans defense. To that point, the Titans had stood up well to the Ravens league leading rushing attack but as Jackson out raced defensive backs to the pylon, he sent a signal to the opposing sideline, he was not going to be denied.

Jackson and the Ravens backed up the late 1st half touchdown by opening the 2nd half with a 10 play, 77 yard drive that consumed just under 6 minutes and finished with a JK Dobbins touchdown run.

Even though the game remained close throughout and wasn’t sealed until Jackson sat down on the Titans 30 yard line, it felt like the Ravens had seized control of the ball game and would not relinquish it.

There were some tense moments in the 2nd half for sure but on the legs of their 3rd year signal caller and on the backs of a suffocating defensive effort, the Baltimore Ravens moved one step closer to Tampa.