The Franklin Formula; The Journey of Anthony Burgos and his Indians Program 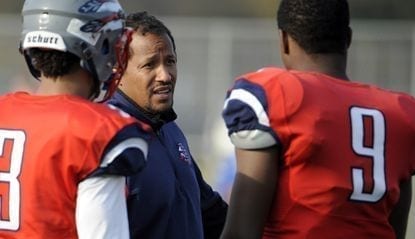 “My goal (is) to get the right guys on the bus, get them in the right seats, and get the wrong guys off the bus” ~ Alabama Coach Nick Saban

A motto Franklin Head Coach Anthony Burgos lives by. It’s been a 16 year work in progress for Coach Burgos and his Indians program, and talking to the native Long Islander, one realizes it’s a process the 3-time state champion coach embraces.

Much of the process has been a learning process, one Coach Burgos has used to push his program to the winningest program in the Baltimore area over the last 7 years. The Tribe has won 75 games over that span, including capturing three state titles and six regional titles.

Such success was only dreamed about at Franklin when Coach Burgos took over the Indians program in 2003, and his program took its share of bruises in its first few years, before getting the right guys on the bus.

The charismatic coach is confident, but not over confident. His recollection down to the detail, going back to his very first game at the helm of the Indians, is uncanny. Along with the thrill of victory, he also vividly remembers the agony of defeat. Every one of those defeats the coach recalls on this muggy night in August, have seemingly served as valuable learning lessons for he and his staff along the way.

As a first-year coach in 2003, he had free reign to schedule his first out-of-county opponent for their week 1 open date. With Burgos being from Long Island, and much of his staff from Pennsylvania, Coach Burgos readily admits that he was very unfamiliar with the high school landscape at the time. He searched a website that served as a schedule matchmaker and found that a newly christened program in Prince George’s County, CH Flowers, who also had a week 1 open date, and booked it.

The Jaguars were a talented cast hailing from the Mitchellville, Glenarden, Lake Arbor, and Springdale areas of Prince George’s County, and Auburn that would serve as one of the valuable lessons learned for the first-year coach. He remembers, “They came with two buses for the players, two for the cheerleaders, and two for their fans.” Forty-eight minutes of game time later, the Franklin Field scoreboard read, CH Flowers 44, Franklin 0.

So, that’s PG. Burgos recalls walking back to the Indians locker room, “I could hear people say, What are they doing”? He offers, “I’m surprised the Principal didn’t fire me on the spot”. Minutes later, Burgos would tell his charges, “This game will turn out to be beneficial for us”.

The process began, and the Indians program began to rise. After a 1-9 season in ‘03, followed by a 2-8 season in ‘04, the Indians emerged at water level in ‘05, finishing 5-5. Then, ‘06, which led to unbridled success for the program, while gaining another valuable lesson, and most importantly, erecting huge building blocks and a foundation for the program.

Following what Burgos calls the biggest win in his then three-plus years with the program, a 38-37 win over 4A Perry Hall, thanks to a game-winning two-point conversion, the Indians would clinch their first playoff berth in Burgos tenure, five weeks later, and the first for the program in 12 years. The Indians would avenge a regular season loss to Towson, with a 33-13 win over the Generals in the opening round of the playoffs. The victory was the first post-season win for the Indians program in 28 years.

Next up were the undefeated, 11-0 Black Knights of City College, the #2 ranked juggernaut in the Baltimore Sun. The Black Knights has outscored their last seven opponents, 234-8, including a 44-8 pasting of arch rival Poly in week 10, followed by a 34-0 shutout of Mervo in the opening round of the playoffs. The Indians defense registered their best game of the year, and ‘The Tribe’ shocked the second ranked Black Knights, 7-6, replacing the win over the Gators of Perry Hall as the biggest win in Burgos first four years. “That win over City at Poly was big.”

The Indians headed to the state semifinal to face another quickly emerging program in the region, the River Hill Hawks, coached by fellow Western Maryland star, Brian Van Deusen. “We went to River Hill and really got thrashed (36-7). I learned a whole lot that day. I saw their coaching staff, the amount of coaches they had, and saw how they ran their program. I evaluated myself. This is the next level. We got here (the state semis), in order to get to their level, this is what we’ll have to do as a coaching staff to get there. It wasn’t about the players. They weren’t ready because we (the staff) weren’t ready. These are the things I learned.”

“I never wanted to build a great team, I wanted to build a culture and a great program”. After three straight playoff appearances following the ‘06 regional championship, the 2010 Indians raced out to a 7-0 record, before losing to Hereford, 14-6 in week 8, and Parkville, 14-7 in week 9,. Still, the Indians clinched their fifth straight post-season berth, with an 8-2 record. The Indians erased the regular season loss to Hereford by throttling the Bulls, 47-14, in the regional semifinal. After two close wins over North Harford and Huntingtown in the regional final and state semifinal, respectively, the Indians were headed to M&T Stadium, earning the program’s first berth in a state title game.

The Tribe would face 5-time state champion Wilde Lake in the state championship, a team that had been there and done that. Coach Burgos recollects, “Now, we were in the final game. It was like a field trip for us”, he says looking back, “the kids were out there taking pictures. I see Wilde Lake come in and walk straight to the locker room. I thought it was arrogance’. The Cats would go on to win, 21-14. Note taken.

Three years and three post-seasons later, the ‘Franklin Formula’ came together. The Indians ripped through Westminster, Milford Mill, and Huntingtown, to reach the state championship again, scoring 49 points in each of the three victories.  The Indians faced another 5-time champion in the state title game, the Linganore Lancers, in a battle of two teams averaging more than 40 points per game. The Indians defense buckled down, and a Jacquez Adams touchdown pass to Steven Smothers on a 4th-and-20 broke open a 7-7 tie in the third quarter, and Franklin won their first state championship on the gridiron, 20-7.

The Indians doubled down in 2014, putting a bookend on back-to-back state titles, with a thrilling 35-21 victory over 7-time state champion Damascus, where Burgos troops scored 35 unanswered points, and stunned the Swarmin’ Hornets.

With great success, along with vast turnover in a high school program, complacency and over-confidence could permeate throughout a program, even one that’s defending back-to-back state champions. And this is where Coach Saban’s words ring true with the Indians Chief.

“My goal (is) to get the right guys on the bus, get them in the right seats, and get the wrong guys off the bus”

“We got the championship blues. People were in it for the wrong reasons. We started drifting away from our mission. It’s a tough struggle.”

The following season, in 2016, the Indians advanced to the state title game, its third in four years, and took on the undefeated Swarmin’ Hornets of Damascus, the #1 ranked team in the Washington Post. The Indians were trailing 14-12 in the fourth quarter, with the ball inside the Hornets 10 yard line, when Larry Smith was intercepted on third down, and any chance of a go-ahead field goal evaporated. Lesson filed.

After earning their 12th and 13th straight playoff appearances in ‘17 and ‘18, Coach Burgos and the Indians would find themselves in the state title game again, facing the Lancers of Linganore, in what would turn out to be hard fought classic, with a hard-to-match, thrilling finish.

With the game all tied at 14, and with 7 seconds left, Coach Burgos knew he wanted to put the game in Simon Spath’s hands, or more accurately, right foot. Burgos’ message to his do-everything star, Elijah Solomon, “Get two to three yards, and take a knee, don’t try to score”! It was just two years earlier where Burgos saw the Indians chance for go-ahead kick vanish after going for it all. Burgos told his Captain, “We have a great kicker, with ice in his veins”. Spath drilled the 29 yard game-winner as time expired, and Franklin became just the second school (Seneca Valley ‘77-80, ‘92-94) to win three 3A state titles in six years.

The leadership, learning, and great teaching paid off, along with an accumulation of great talent.

“You can have great talent, but you need character to be successful”, says the three-time state champion coach.

When Coach Burgos took over the Head Coach position for the Indians in 2003, the Indians had won 1 playoff game in its program’s history. Since, Coach Burgos’ Indians have won 23 post-season games. Their 13 straight playoff berths ranks as the 5th longest in MPSSAA history. The three state titles in the last six years are the only 3A or 4A titles won by a Baltimore County team since Randallstown won the 4A state title in 1990. Coach Burgos 133 wins ranks 6th best in the MPSSAA among current coaches, as does his 23 playoff wins.

The former Western Maryland Green Terror cornerback, whose brother starred at Temple, before a 10-year career in the CFL, says, “My mission is to build a program with kids that have great character, that show that great character when I’m not around. I want them to be respectful, to be good husbands and good fathers. I want the kids to understand what we expect from them every day. We’ve learned as a staff. We haven’t been stuck in our egos, or been stubborn, or afraid to add new people.”

That’s evidenced by the addition of Don Damico as the Defensive Coordinator this season. Damico spent 24 years at the helm at McDonogh, winning or earning a share of 8 MIAA league titles. “It’s coming together real nice, right now”, says Burgos.

Despite the loss of Solomon, and workhorses Jay Thompson and Robert Garrett, Coach Burgos has a great feeling about this year’s tribe. Burgos’ enthusiasm is buoyed by the returning talented cast, which includes Mekai Felton (Fordham commit), who Burgos calls “our leader”, and cornerback Xavier Cokley (JMU commit). Felton had 3 receptions for 91 yards and a touchdown in the state title game win, while Cokley led the Indians in passes defended in ‘18, with 16.

Adding to the ensemble is quarterback Vernon Brown, who returns after throwing for 1,800 yards and 18 touchdowns last season. Add to that, 2-year captain Isaiah Lewis, who Burgos’ expects to especially shine on defense this year, and junior defensive back Daymon David, who is garnering a number of D1 looks. And of course, Spath, he of the golden boot.

As Burgos heads down to Franklin Field for the second of a two-a-day practice in the late-August twilight, he aims to get the right players on the bus, in the right seats. “This is one of the most talented teams I’ve had. I’m excited to see how this story turns out.”