What Fuels The Titans Running Success? 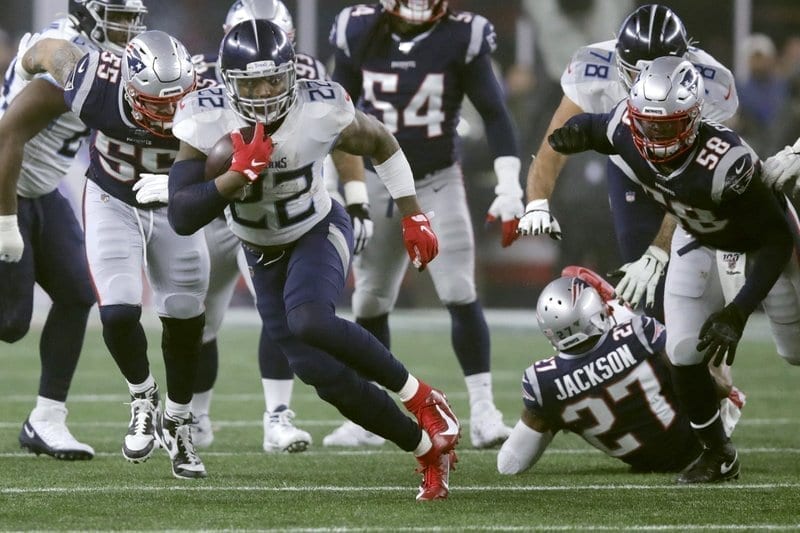 We know who the Ravens are drawing in the Division Round now. Apparently it’s Derrick Henry!

I went back to take a look at the game but a couple of things stood out to me when I first went back through the box score. The first you notice is the Titans punted in this game. And they punted six times on 9 total drives with total downs on those drives of 3, 3, 6, 4, 10 and 7. The drive for 10 yards was the one with 3 penalty snaps, so I’m counting that as 7. The drive of 4 had the pass interference or would also have been a three and out.

So really, there was only 2 drives to focus on to see what the Titans were doing to find success. The first drive was essentially about going big.

So what happens on the very first play, I’m usually just counting hats and trying to take a look at what formation the offense is trying to show and how the defense is going to respond. So the first play from scrimmage looked like this. That’s 7 green hats and 7 block hats in the box, plus a WR tight inside the numbers with 2-deep safeties and a CB playing deep and outside the hash. It turns into a play action pass, but I note it here not for the play but just the theme from the Titans early.

The next play the Titans go jumbo. The put 8 guys on the LOS, you can count Tannehill, the WR and Henry. The Pats have two dep safeties again. If you can line up in a jumbo package and draw 7 in the box and a CB on the numbers, you’re going to get a positive running play. Henry gets 8 yards on this play, more yards than 3 total drives that were three and outs later in the game.

The Titans pick up another first down, and on the ensuring 1st and 10, the Pats stay with the 7-man front.  At the snap there are 7 guys on the LOS, everyone gets blocked, and Henry bursts through for 9. You can even see the WR running open here for a down field block. The Titans just could not get a block shed on those running plays.

I swear these pictures are different plays. The Titans come right back out on the next play and show a formation with the same look, the Pats go with 7 in the box, refusing to be beat by the play action. It looks like 54 has a shot at Henry in the second screen but he’s actually being cut block by the center, he falls to the wayside and it’s an easy first down for Henry.

Tell me if you’ve heard this story before, the Titans put 8 guys back on the line of scrimmage. The Pats finally put 8 in the box but it’s slanted heavy to the strong side. But when you go jumbo, you have two TEs to one side but one TE to the other. So on the “weak side” you’ve still got 4 blockers (in green) on 4 defenders (in black).  Again, no block shed and the Henry easily picks up the first down.

Overall, on this drive, I was pretty nonplussed by the Pats defensive play calling. They knew Henry was the guy that could beat them. They’ve got Gilmore who can match up one on one on the outside. They should be able to force the Titans off the ball, stack the box, and still have success. I want the Ravens to stack up the box when the Titans do and force Tannehill to try and beat them.

The irony of all of this to me is that the Pats are finally beat when the Titans go shotgun and the Pats play man coverage and finally bring 8 up into the box and blitz 7 guys. It’s 3rd and 10. You can already see 25 leaning the wrong way at the 6. Tannehill is just looking that way, and he gets his man easily. Tannehill did make them pay here but 25 just played this one flat out wrong.

Are you a Ravens fan? If so do you recognize 25 misplaying a coverage here? Maybe it’s because it’s Terrance Brooks! I think the solace here is that the Ravens would have Carr, Humphrey, and Smith over covering that trio of guys on a 3rd and 10 and likely don’t have that type of mental lapse.

So how did the Pats slow Henry down when they did? Maybe it’s just as simple as the number of hats. The far guy Shelton comes across and stops Henry here. And the Titans try and pass on 3rd and 3 after that and get stopped.

On the next drive that there is a stop of Henry, the jumbo package is beaten when Simon drives the TE on the formation back. On this play, 93 draws a double team, 55 drives his man back into the back field and takes away Henry’s ability to get downfield. Attacking the blocking TEs could be a lesson for Baltimore. The drive fizzles out after Tannehill is asked to throw.

The big 29-yard run by Henry to really get it rolling was something I think the Ravens are going to need to watch. On this play, you can see at the snap, the Pats have 8 in the box. But 27 who is the guy just inside the 30-yard line is the guy to stop Henry here. His technique is awful. He’s flat footed, Henry slices through that and right by that defender. The defenders need to know their run fits very well for this game. But leaving CBs isolated against Henry isn’t going to get it done.

The next big run play comes when Shelton misses a tackle, when the free defender has a shot at Henry, he’s going to need to be brought down. It’ll be critical the interior DL plug up holes or force Henry to move left to right when he gets going, but that’s much easier said than done.

Henry breaks off another 10, ask me if you’ve seen this before. 5 hats on defense, 5 hats blocking on offense.

The early lesson for me is that the Ravens should play a lot of 2 ILB sets with three down line men in front of them. I think we’ll see a heavy dose of Williams, Peko, and Pierce, and Fort and Bynes should be staying tight to the middle together. Of almost all the big runs, it was mostly inside the tackles and mostly just brute force of the Titans going bigger up front and bowling over the Pats. The Ravens have been comfortable with going big all year and putting heavy numbers in the box. That needs to continue.

Henry is scary but he can be contained, even in this game, with a lot of yards, and a couple big drives, generally speaking Henry was contained. I think the bigger way to keep him off the field is getting a multiple touchdown lead and forcing Tannehill to beat us in true passing formations.

I’m going to take a look at the Titans defense later this week to see how they look. They were a team that was 21st in yards allowed on the year and tied for 19th in yards per play. Their DVOA was 16th on the year but only 2% away from being 19th and was positive, so below league average overall. Perhaps the best way to slow Henry down is keep Henry off the field or the ball in Tannehill’s hands.