After some odd press releases championing four candidates for the role of Ravens Offensive Coordinator, Gary Kubiak emerged as the odds-on favorite only days before his eventual hiring.  Along with his well-documented offensive strategy, Kubiak brings his former OC Rick Dennison and tight-ends coach Brian Pariani with him to Baltimore.  How will Gary Kubiak’s style mesh with the Ravens current personnel?  This is the question I hope to answer throughout the off-season, but I’ll share my preliminary feelings below.

Discuss this and other pieces on our Forum.

With Kubiak in, the zone rushing attack is here to stay.  I have said a number of times that the Ravens personnel isn’t particularly suited for this scheme and they certainly struggled running it last season.  Fortunately the Ravens can address new positions of need (RT, C, TE depending on priority) to fit the zone blocking scheme.

Last year the Ravens were out-muscled up front mostly due to continuity and communication issues.  These issues appeared to stem from a lack of commitment to the zone-blocking scheme, inexperience at Center/Left Guard, and two injured/inefficient running backs.  So why was Kubiak a unanimously heralded OC hire?  My answer is that his zone-blocking scheme is far more effective from an Xs and Os standpoint.

The center of the Ravens offensive line let their running game down last year.  Too often C Gradkowski was caught one-on-one with a 3-4 nose-guard as in the play below:

Gino (C) battles #99 Brett Keisel one-on-one but this didn’t have to be the case.  LG Osemele should have helped Gino before (unsuccessfully) scooping up to the second level.

In watching the Texans from last year, Kubiak’s scheme asks the lineman to accomplish far more realistic tasks.  Double teams create displacement of first-level defenders, “domination blocks” (i.e. zone scoop with clout) are far more apparent, and the offense continually attacks the “bubble” in the defensive front (i.e. uncovered gap in the D-line) in order to more easily control the line of scrimmage: 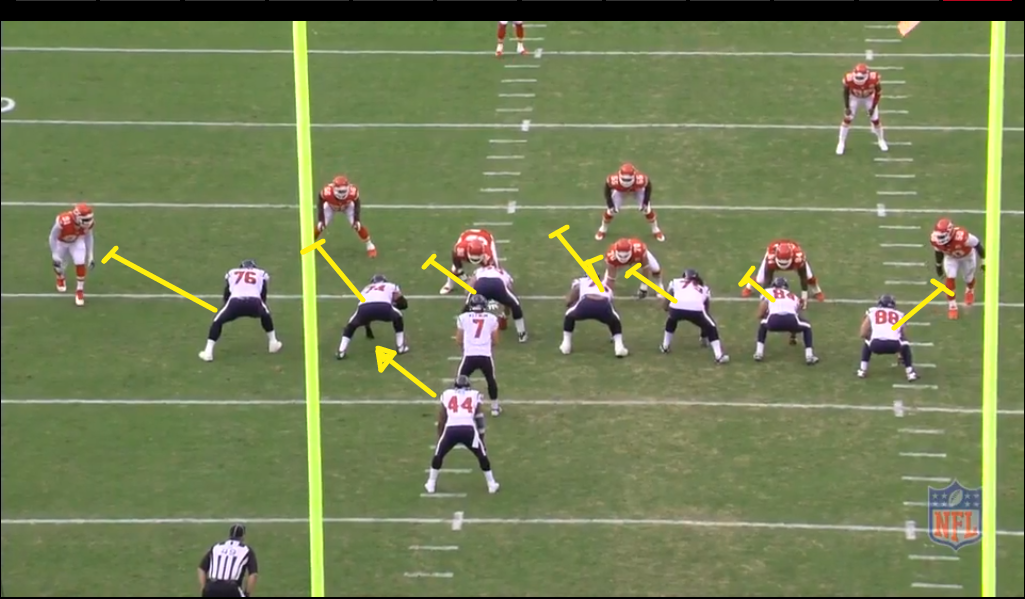 Inside zone attacking the “bubble.” Image via www.cover32.com.

Kubiak’s scheme will re-instate the backside cut-block that was mysteriously missing in the 2013 Ravens zone attack.  Backside cut-blocks (when executed correctly… i.e. attacking the far thigh) minimizes pursuit and can be used to intercept two defenders with one player.  Many Ravens fans remember the borderline illegal chop-blocks used by the rushing attack in previous years:

Kubiak will implement some interesting zone-blocking intricacies that help his lineman with leverage while adding ambiguity to the play-call.  Some things I saw from the Texans was increased Pin+Pull or “Fold” technique:

The Fold technique gives a “Power” look from a zone-blocking base.  In the above image, LT Monroe “down blocks” the 3-technique while LG Shipley pulls to the play-side to seal the first scraping ‘backer.  These wrinkles were not the norm for the Ravens last year, who too often used “Reach” blocks across the offensive line.  This, as many know, ended poorly.

Kubiak’s zone-blocking scheme will emphasize in-line tight-ends as well as blocking fullbacks in order to introduce extra beef and extra gaps to the defensive front.  These strategies will be personnel dependent, particularly since the Ravens do not currently have a blocking tight-end and Leach’s future in purple looks bleak.

Kubiak is a West-Coast disciple who uses many of the same concepts that Mike Shanahan used while they were together in Denver.  This type of passing game was designed by Bill Walsh and emphasizes “rhythm” passing with precision timing.  Although a bit of a departure from the Walshian system, Kubiak’s play-book still allows the offense to use standard coverage-beaters against well-defined defensive looks due to its rigidity in route combinations.  Even Matt Schaub, a sub-par QB, had the ability to thrive without impressive arm-strength because the scheme allowed routes to take advantage of seams in the defense in order to reduce the number of contested throws.

Kubiak runs a high-percentage of his pass plays from play action. And the zone-blocking scheme allows for the “boot” and “dash” roll-out game to suck in defenders and make them chase receivers:

Another reason for optimism is the focus on “shot plays” from play/boot action.  With a moderately successful rushing attack, Flacco should be able to take advantage of heavy defensive personnel and throw deep passes to speedster Torrey Smith with far more efficiency.  In addition, the deep pass concepts under Kubiak appear to schematically isolate receivers rather than asking them to beat deep zone coverage or double-teams by high-pointing the football in the air.

Lastly, the Kubiak-led Texans were adept at running screens from a number of formations.  The Ravens screen-game was poorly blocked as they used unconventional blocking techniques that, frankly, just didn’t work.  The Texans HB screen game employs the Center and both Guards in front of the pass-catcher and they often cut-block linebackers along the way.  Additionally, when this offense faces off-coverage, WR screens are used effectively:

The above play gives Schaub two options for screens, both with three blockers ahead of the potential pass catcher.

Problems I see at the moment

I plan to do a lot more work on how Kubiak fits the Ravens. Please leave thoughts or suggestions in the discussion for this piece.

Dan played high school football at Wilde Lake and graduated from McDaniel College with a degree in Psychology. Dan is currently a Maryland Terp working on his PhD degree in Neuroscience. He has experience writing published scientific material as well as blogging for SBNation via Baltimore Beatdown. Beginning in the 2012 season, Dan has been writing about the Ravens focusing on the X’s and O’s of the game of football with heavy use of overhead (All-22) film analysis. The Columbia, MD native currently lives in Silver Spring.