How much will each network be hurt by this fall’s college football postponements? 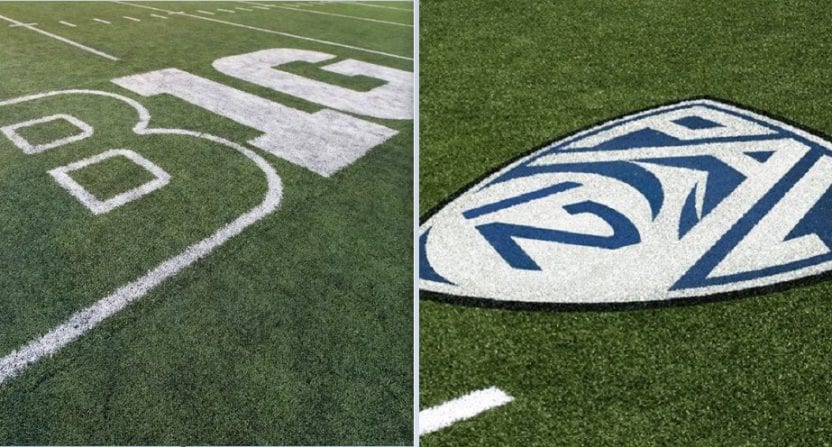 This coming weekend marks Week 1 of the 2020 college football season. Unfortunately for fans, and for TV networks, four FBS conferences postponed their seasons and will not play in the fall – the Big Ten, Pac-12, MAC, and Mountain West. Several FCS conferences also postponed their seasons, with only the OVC, Southland, and SoCon playing in the fall.

This has led to a tricky situation for America’s four major networks (CBS, NBC, ABC/ESPN, and Fox) and their respective cable channels, which all air a sizeable amount of college football each fall. With so many conferences not playing, that means that networks will be losing all those hours of live content. Each taking is taking its own hit, but which networks will be hurt the most?

NBC probably takes the most minimal hit, as they only air Notre Dame home games. The Fighting Irish originally had six home games scheduled prior to the cancellations, and after their schedule was reconfigured, Notre Dame has…five home games. NBC retains the marquee game on their slate in its initial window: November 7th’s tilt with Clemson. The network also keeps Notre Dame games with Duke and Louisville, though their placement on the schedule has been shifted. Notre Dame won’t be hosting Arkansas, Western Michigan, or Stanford this season, and they’ve been replaced on the schedule with a far more attractive matchup with Florida State and a game with Syracuse. Overall, despite losing one game, the addition of Florida State and the preservation of the Clemson game results in NBC arguably being in a better position.

CBS is also a network in a good position. Their primary college football package is the SEC’s premier game each week, and with the nation’s toughest conference playing this fall, the CBS broadcast network will continue to have the first pick of SEC games each week. CBS Sports Network takes a bit of a hit without the Mountain West, but it still has the rights for both Army and Navy home games (both schools are playing this season) and some Conference USA games. All in all, CBS will only really be hurt on its cable network, and largely in the later windows of the day.

ESPN takes the biggest hit in terms of overall inventory, since it has deals with the Big Ten, Pac-12, and MAC, along with streaming deals with many FCS conferences. That is a whole lot of games that will be missing from the airwaves this season.

Additionally, ESPN owns and operates the ACC Network and SEC Network, both of which will be playing games this season. That ensures the two networks won’t be wastelands of content during the football season, unlike the Big Ten Network.

Speaking of the Big Ten Network, that brings us to Fox. Fox has the rights packages for four conferences: the Big Ten, Big 12, Pac-12, and Mountain West (which was supposed to start this year, taking over from ESPN). As you very well know by now, three of those conferences won’t be playing games this fall. Perhaps more unfortunately, Fox is the owner and operator of the Big Ten Network. With no Big Ten sports this fall, viewers have no reason to watch the network and Fox’s operations will take an even bigger hit.

This fall, college football on Fox will consist of probably three Big 12 games per week, and that’s about it. Given that the network has typically loaded up Fox, FS1, and BTN with live games every Saturday (and in necessary instances, Thursday and Friday), that’s a major drop off.

Furthermore, Fox doesn’t even have the NBA and NHL playoffs to fall back on – Turner and ESPN share the NBA’s rights, while the NHL is an NBC property. And following the loss of the Bundesliga to ESPN for the upcoming season, there isn’t even any weekend European soccer for Fox to air. The network’s live sports in the fall will consist of the Big 12, the NFL, and the MLB Postseason (along with occasional boxing events). It’s a horrible turn of events for Fox, who built a fair bit of their “new Fox” strategy around live sports.

In short, here are the takeaways. NBC and CBS aren’t affected all that much. ESPN loses quantity and some quality, but still has plenty of both in reserve. Fox loses both quantity and quality and will be left with under half a dozen games each week.

I think the worst part about this for Fox is that the network will seemingly lose the momentum it began to build up a year ago with its Big Noon Kickoff pregame show. With a minimal schedule appealing to fans of one conference, will viewers still tune in each week? Or will the viewership take a dip, forcing Fox to put their foot on the gas in 2021 to regain that lost momentum?

And to think, after all that, we still haven’t even taken a dive into what potential spring seasons would look like across the networks.