How The Nats July 4th 11AM Game Came To Be 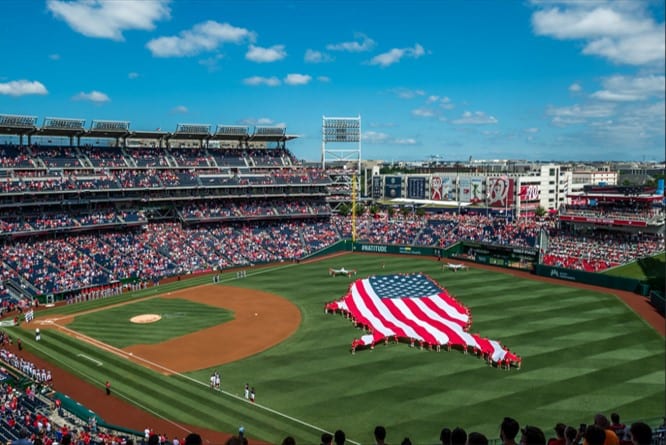 How fitting that the 10th edition of the Nationals annual 11am 4th of July game features the Los Angeles Dodgers. On paper, it provides Major League Baseball with a marquee national TV matchup for its MLB Network, featuring the defending World Series champions. It also features the team in which the person behind the idea for the tradition currently works for – Bob Wolfe, current Dodgers EVP & COO.

Back in the middle of the 2011 season, I was a colleague of Bob’s at the Nationals. Bob served as EVP for six seasons while I worked in the marketing department from 2009-2015. It was a time when the club was building its fan base and one in which any type of promotion was considered (e.g. remember $1 Mondays?).

Usually, in late May or early June, a meeting was convened to draft initial game times for the following season, with the goal of balancing maximizing fan attendance, TV ratings and team travel considerations. This was a meeting that I looked forward to every season and considered one of the more unique and fun experiences of working for a professional sports club. The meeting typically included myself, Wolfe, GM Mike Rizzo, VP of Travel Rob McDonald, VP of Marketing & Broadcasting John Guagliano, VP of Ticket Sales Chris Gargani, and Owner and Managing Partner Mark Lerner.

Since relocating from Montreal, the Nats had always been home on the 4th of July, with the exception of the first season of baseball at Nationals Park – 2008 (at Cincinnati).  Outside of the club’s inaugural season at RFK Stadium, games on that day had not drawn capacity crowds:

With so many other events held on The Mall and elsewhere, a discussion ensued on how to try and entice fans to fill the ballpark on the holiday, as previous game times at Noon or 1pm had not been as successful as the club would have liked. It was at this point that Bob suggested the 11AM start time. A consensus was immediate, with Lerner noting that it could be akin to the Red Sox 11AM Patriots Day, an 11AM game held on the third Monday every April.

League approval was sought for the special game time and received with one stipulation – the game could not be the first game of a home series. To accommodate travel, league rules required that the first pitch of the initial game of a series be no earlier than 1PM.

For the 2012 season, the July 4th game fell on a Wednesday as the middle game of a three-game series vs. the San Francisco Giants. The 11AM game tradition was born. The result: paid attendance of 35,806. The game also featured a marquee matchup, as the Nats were en route to their first NL East title and postseason berth while San Francisco would eventually win the World Series title in a sweep over the Detroit Tigers, the club’s second of three titles in a 5-season span.

The July 4th 11AM tradition is usually preceded by a July 3rd fireworks night. At the same time, the club wanted to ensure that players, as well as ballpark and team staff, had ample rest for the early start the following day. After starting the 2012 game at 6:30pm, the club moved up the 2013 game to 6pm. The game wound up being played in 2 hours 46 minutes, under the expected 3-hour average and ended while there was still too much daylight than is typically desired for fireworks. The fireworks were set off but only after a short delay to allow for darker skies. Fast forward to last night’s game which started at 7:15pm for inclusion in the Fox network’s Game of the Week schedule. Following a long rain delay, analyst John Smoltz noting a 3-3 tie, joked that there would be 2am fireworks.

Interesting to note, the 11AM tradition may not be Bob Wolfe’s most unique July 4th MLB experience. Prior to the Nats, he spent 12 seasons with the Atlanta Braves, eventually rising to Sr. Vice President. In 1985, the Braves hosted the Mets in what would become a legendary July 4th game. That game was delayed by 90 minutes due to rain and was eventually won in 19 innings by the Mets, 16-13. The Braves tied the game twice in extra innings, once with a home run by pitcher Rick Camp while Mets, and former Nats manager Davey Johnson, was somehow ejected twice. When the game ended at 3:55am, the club’s postgame fireworks show began. Wolfe was there for its entirety, manning the scoreboard operations for all 19 innings.