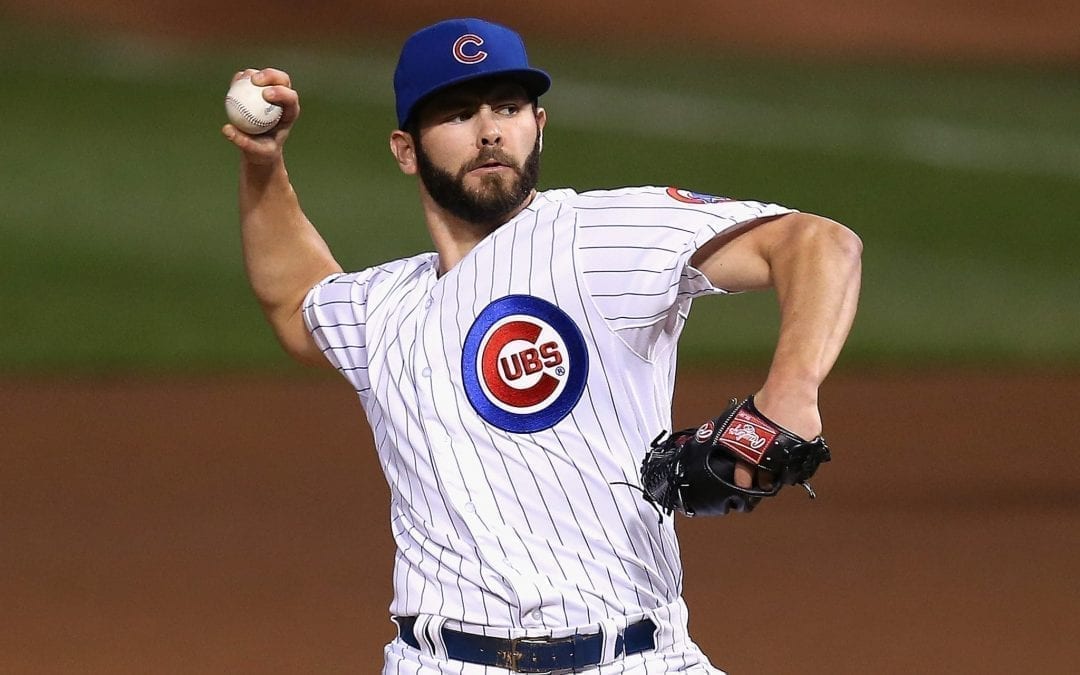 Over the last two seasons, he’s been slightly worse than Clayton Kershaw. Sometimes that sort of sentence construction would indicate sarcasm – Delmon Young is slightly worse than Mike Trout* – but not in this case. Kershaw has the lowest FIP in the Majors over that time, at 1.97(!), but Arrieta comes in second among qualified starters at 2.38. He’s been outstanding. But let’s flash back ~screen wavers~.

* This is at least close to true if you’re looking at all people, and not just the universe of Major League baseball players.

After a couple of shaky seasons in Baltimore, Jake Arrieta had a somewhat promising 2012, upping his strike-out rate and handing out fewer free passes. The 6.20 ERA looked ugly though, and the walks came back with a vengeance in 2013 (6.5 BB/9!). Arrieta was sent to the minors at the end of April, and spent most of the following two months there.

As the calendar turns to July, the O’s are 3.5 games out of first in the AL East and have one of the worse pitching staffs in the league. At this point, it sure seems like the Orioles don’t think Jake Arrieta can pitch well. The Chicago Cubs apparently disagree. They think he has a chance to be very good. And so Arrieta (and reliever Pedro Strop) are sent over to the North Side, in return for perfectly fine starting pitcher Scott Feldman (and back-up catcher Steve Clevenger). Feldman’s job is to solidify the O’s rotation down the stretch, before he left as a free agent at the end of the year. The Orioles finished the season 12 games out of first place. Feldman pitched a little worse than he had in Chicago, but his ERA jumped close to a point (small sample sizes, it happens). He still got 3 years and $30M from the Astros in the off-season.

At the time, the trade very much fit into the pattern Dan Duquette had established. He was willing to give up a younger player that he didn’t believe would actually help the team to get a marginal “veteran” upgrade. I hated it in a vacuum, but thought it was fine once you take as a given that the O’s had lost faith in Jake Arrieta (as had many fans, who also were happy to be rid of the inconsistent Strop). If Feldman was the difference between making the playoffs and not (unlikely, but not impossible), then he’s better than actual nothing. It clearly looked like a good deal for Chicago, even if all they were doing is picking up extra years of cheap team control over a back of the rotation starter. And then we saw a magic trick, as a 5 of Diamonds turned into the Ace of Clubs*.

Week after week, O’s fans would see updates on the news ticker; “Jake Arrieta takes a no-hitter into the 6th inning. Again.” There was some blame heaped on Baltimore’s front office for not allowing Arrieta to throw a cutter, and that very well may be deserved. It’s also possible that some pitching coach or other should have been able to help him find the mechanics that have done so much to improve his command. But there’s a reason that a player needing a “change of scenery” is an oft-used baseball cliché, and no team can guide everyone to their ceiling. Also, the O’s might have used up all their Magic on the bullpen and (selectively) the offense*.

* Chris Davis hit 53 home runs for the team the same season Arrieta was traded. The following year Nelson Cruz hit 40, and Steve Pearce added 21 in fewer than 400 PA. Jimmy Paredes has 12 homers in 80 games for the O’s after hitting only 3 in 127 games previously. Delmon Young hit .302 with the club in 2014, and had a game-winning hit in the playoffs. Delmon Young!

This year, Arrieta has accumulated 3.7 fWAR. Orioles starters, combined, have accumulated 4.8 fWAR. It’s not crazy to think that with him replacing the not so good innings pitched by Bud Norris and Mike Wright, the Orioles (currently 4 games out in the AL East) could be in first place. But that isn’t exactly how things work. If Arrieta was still with the O’s, he probably isn’t throwing that cutter (with its 26% whiff rate) almost a third of the time. And it’s very possible that he would never have quite put it all together enough to utilize his older repertoire effectively either. In which case the Orioles would have an additional promising hard-throwing young right-hander* not being used regularly at the big league level.

* Given recent rumors, history may be repeating itself to a degree.

As a baseball fan, it’s great to see Jake living up to his potential. He sure would look good doing that at the front of the O’s rotation though, and that’s the part that rankles just a bit.