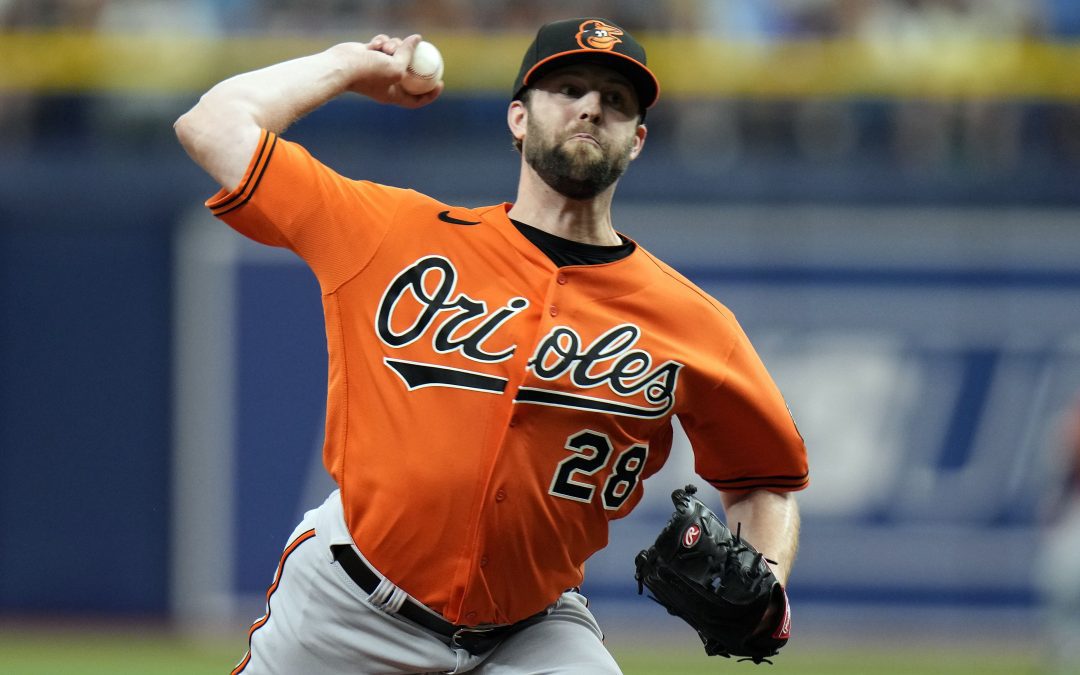 When you look at the 2022 Baltimore Orioles, it’s easy to find players to highlight for their early success this year.

Austin Hays leads the team with a .808 OPS, while Bruce Zimmermann has emerged as the staff’s new ace after John Means got injured. In the bullpen, Jorge Lopez has had his career rejuvenated as a closer and Felix Bautista is providing remarkable velocity along with an ERA under 2.00.

However, I’m not here to highlight any of these players. Instead, I’m here to talk about someone who has been exactly advertised, for better and for worse: Jordan Lyles.

When Lyles was signed as a free agent, he was repeatedly described as an innings eater. If Lyles took the mound, you could expect he’d provide length, but not much more than that.

In 2021 with the Texas Rangers, he averaged 93 pitches per start and cleared the 100-pitch mark in nine of his 30 starts. He led the Rangers in innings pitched and games started, providing them with a reliable option. However, his reliability came with a below-average 5.15 ERA.

The Opening Day rotation was Means, Lyles and three starters who hadn’t really established themselves, so Lyles was needed to give the rotation stability and length as an experienced arm surrounded by preseason question marks like Zimmermann.

Through six starts and 33.1 innings, it certainly seems Lyles has delivered what has been needed from him.

Lyles has lasted at least five innings in five of his six starts and just provided a very valuable 7.1 innings in the first game of a doubleheader against the Kansas City Royals on Sunday. Lyles leads the rotation in pitches per start, averaging 91 pitches with a season-high of 101 pitches.

There are only 14 pitchers in the majors averaging more than 91 pitches per start this year, showing that Lyles has been able to stay on the mound in his starts for longer than most pitchers.

Lyles is also one of 49 starters across the league who have thrown at least 100 pitches in a start this year, further proving that he has earned the trust of the team to keep throwing for longer than most starters have this season.

While Lyles has lived up to his ability to go deep into starts, he’s also provided an ERA that is below average. A 4.05 ERA would normally seem like a good figure, but his ERA+ is 94, essentially meaning it’s six percent worse than the league average. You can attribute that to an underwhelming run-scoring environment across the league.

The 4.05 ERA from Lyles is below-average, but hardly dreadful. However, the same can’t be said for his WHIP and H/9. Out of 59 qualified starting pitchers, his WHIP ranks 54th and his H/9 is 55th. His K/9 is also pretty underwhelming, ranking 48th.

Interestingly enough, Lyles is further away from the bottom for HR/9, sitting in 44th place among the 59 starters. Being in 44th place on a list of 59 people doesn’t sound very inspiring, but it is an improvement from 2021, where he ranked 38th among 39 qualified starters.

If Lyles keeps pitching like this going forward, he’ll continue to provide value just from his stability and durability. Lyles would’ve led the 2021 Orioles in innings pitched, quality starts and pitches per start. On top of that, his 5.15 ERA would’ve ranked third among starters. Someone like Lyles will not raise the ceiling of your rotation, but he can certainly raise the floor.

Lyles also provides value to this team by simply being a pitcher they don’t need to worry about developing.

We’ve already seen Kyle Bradish make his debut and he’ll presumably be followed by Grayson Rodriguez and DL Hall later this year. That trio will be carefully managed in their first season in the majors with a focus on their long-term success, and it’s reasonable to predict they won’t be expected to throw 100 pitches for every start.

However, that’s certainly not the concern for the 31-year-old Lyles with over 1,000 career innings. You know what you’re going to get with Lyles and that’s an ability to throw 90 to 100 pitches without any concerns about the team’s future. He is a low-maintenance workhorse in a rotation where no one who is healthy has more than 120 career innings in the majors.

This article was not written to sing the praises of Lyles, but to simply acknowledge that he has been doing the job that has been asked of him. As long as Lyles continues to eat innings in an otherwise inexperienced rotation, he’ll remain a useful but unspectacular member of this team’s roster.