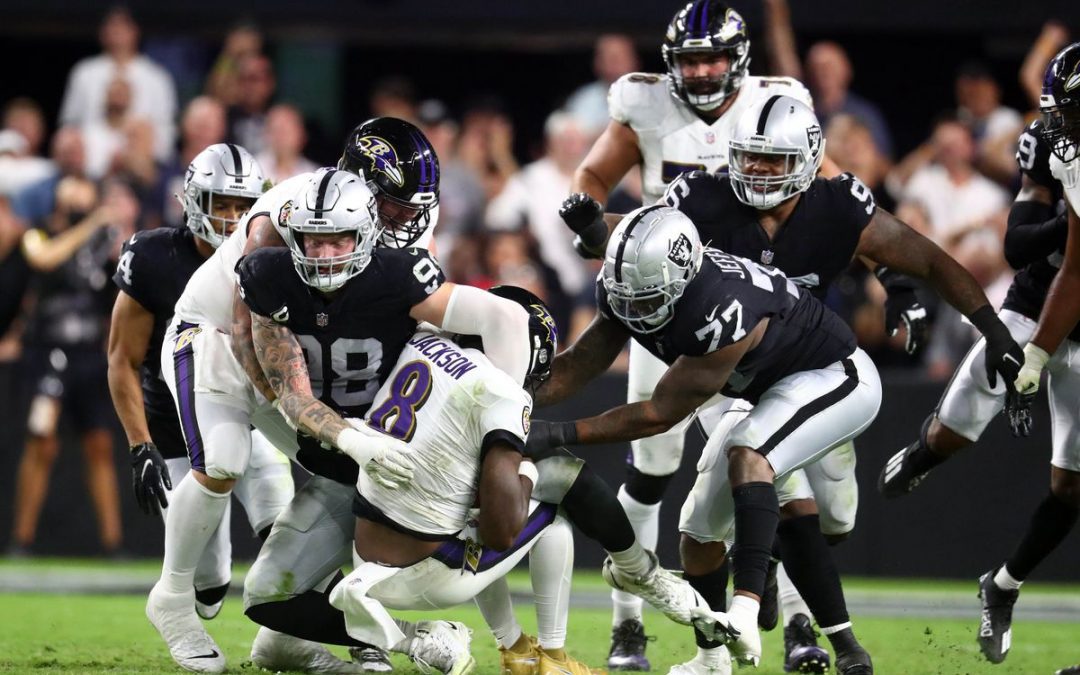 There are a plethora of things to unpack from the season opening loss against the Las Vegas Raiders. Monday night’s roller coaster ride saw the vaunted Ravens defense being gouged for 491 total yards and 33 points, the porous play of the offensive line and multiple turnovers. All of those things conspired to leave the Ravens collectively shaking their heads on the long flight back to Baltimore.

Before going into the who, what and why, I have to say this, for as many brutal moments as there were on Monday night, I don’t believe that was some harbinger of things to come. It took a D- effort from the defense, a glut of offensive mistakes and multiple turnovers to lose an overtime road game to a team playing in front of fans in their new stadium for the first time.

The glaring issue of the evening was the exceedingly poor offensive line play, particularly from right tackle Alejandro Villanueva. He was bull rushed, undercut, ran around and ran through all night. For the “OG” Ravens fans, his poor performance conjured memories of Kip Vickers and “Turnstile” Tony Pashos. Quite frankly, a cardboard cutout of Alejandro Villanueva would’ve been more of an impediment to the Las Vegas defensive line than the actual Alejandro Villanueva. Raiders defensive end Maxx Crosby beat Villanueva like a drum for the majority of the evening. Even All Pro left tackle Ronnie Stanley had a tough time with former Raven Yannick Ngakoue and looked rusty in his return from last season’s ankle injury. The lackluster play of the offensive line led to 3 sacks, 7 quarterback hits and constant pressure on Lamar Jackson. The game turned for good at the four and a half minute mark of overtime, when the protection broke down and allowed a blitzing Carl Nassib to get a strip-sack of Jackson, which set up the game winning touchdown a few minutes later. Needless to say, I wouldn’t want to be in the film room with the offensive line this week, it’s going to be ugly.

Defensively, this was a tale of 2 halves. In the 1st half, the Ravens looked like the Ravens. Despite the crushing loss of Pro Bowl corner Marcus Peters, they held the Raiders mostly in check. The patented Wink Martindale, multiple look pressures created enough problems that the Raiders had some difficulty moving the football. Josh Jacobs and the running game were kept bottled up for the majority of the game, to the point where Las Vegas coach Jon Gruden turned the game over to Derek Carr. As we all know by now, Carr did not shrink from the challenge.

In the 2nd half, between an inability to get home with the pass rush and having to use some inexperienced players in the secondary, Carr was a one man wrecking crew. He led the Raiders into Ravens territory on four out of six 2nd half drives; the dagger being with only 37 seconds left in regulation where he was able to complete 2 passes for 38 yards and set up Daniel Carlson for a game tying 55 yard field goal. Carr put the exclamation point on his evening by carving up the fatigued Ravens defense in overtime. Albeit, for a fleeting moment, it looked like the Ravens may snatch victory from the jaws of defeat after an end zone interception on a deflected pass but it was not meant to be. A few plays later, the previously mentioned Lamar Jackson fumble set up the game winning TD toss to Zay Jones.

I have a recurring theme whenever it comes to a game prediction and it might be the one constant truth in the NFL….if you take care of the football, you’re probably going to win. If you don’t take care of the football, you’re probably going to lose. As simplistic as that may be, that mantra rang true once again on Monday night. The two Jackson fumbles, along with the turnover on downs when the Ravens failed on 4th and 1, turned into 16 points for the Raiders. It’s not just the points allowed but it’s also the potential points taken off the board and sudden change of possession; as well as the loss of momentum. Although it won’t show up in the takeaway column, the turnover on downs with 1:13 left in the 1st half stopped a solid drive and allowed the Raiders to kick a field goal before the end of the half and cut the Ravens lead to 14-10.

After the Ravens had pushed the lead back to 17-10, Lamar Jackson put the ball on the carpet while diving for extra yardage and the Raiders recovered. On a short field, Las Vegas put the ball in the end zone five plays later to tie the game at 17.

In spite of the loss and several concerning things, there are some things to be excited about moving forward. Defensively, there were some encouraging individual efforts from rookie Odafe Oweh and 2nd year linebacker Patrick Queen. Offensively, save for the fumbles, Lamar Jackson was the biggest reason why the Ravens were in the game to begin with. He was able to elude pressure and make some plays with his legs (as usual), along with some nice throws. Rookie Ty’Son Williams definitely looks like he belongs and should be in line for more than the 9 carries he got on Monday night as the season rolls on. It was also encouraging (and a relief) to see Hollywood Brown haul in all 6 targets that came his way, including a touchdown reception on a masterful escape act and throw on the run by Jackson.

For as disappointing as it was to witness a mistake riddled overtime loss on opening night, the Ravens should be able to right the ship. The stability provide by John Harbaugh and his staff, along with a still talented roster should hopefully be sufficient to not let the season go sideways. With that said, the Kansas City Chiefs are looming for the home opener, so their certainly will not be a reprieve of any kind. Ravens fans can only hope that the reverse lock postulate of sports in is full effect at The Bank this Sunday night. If the Ravens cannot put forth a stellar, mistake free effort in week 2, they could be staring at an 0-2 start for the first time since 2015.