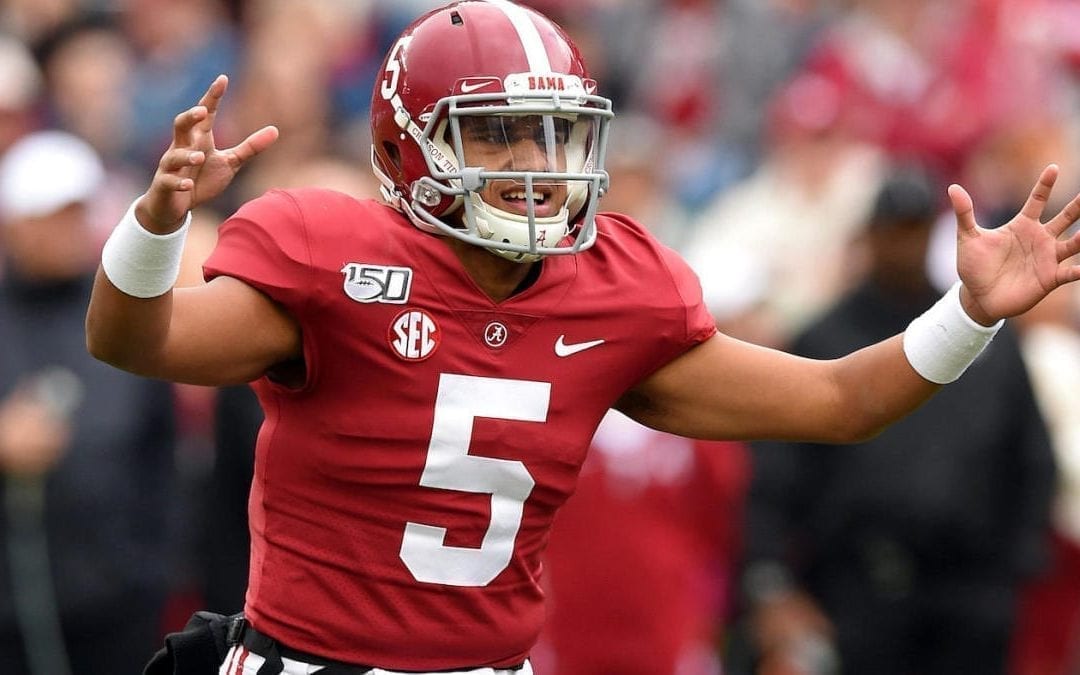 The big news that broke Friday night (5/15) on various outlets like ESPN, CBS Sports, Yahoo and Testudo Times was as follows:

“Taulia Tagovailoa is transferring to Maryland, he announced Friday. The former Alabama quarterback entered the transfer portal on May 8, and he has found his new home with the Terrapins.

Tagovailoa is the younger brother of former Alabama quarterback Tua Tagovailoa, who was selected fifth overall in this year’s NFL draft by the Miami Dolphins. Tua was coached at Alabama by current Maryland coach Mike Locksley, and while Taulia did not play for the former Crimson Tide offensive coordinator, there is familiarity with the family.

“Taulia has outstanding field vision and excellent pocket awareness,” Locksley said in a statement. “He’s a twitchy passer that has the ability to make and extend plays in and outside of the pocket because of his above-average athleticism. Taulia has terrific touch and trajectory on his throws and delivers the ball with above-average accuracy. He’s a highly competitive player that will bring great competition to a good quarterback room.”

The younger Tagovailoa was ESPN’s No. 143-rated prospect in the 2019 class and the fifth-ranked dual-threat quarterback. He was in the same class for Alabama as ESPN 300 quarterback Paul Tyson, the great-grandson of former Alabama coach Bear Bryant. Tagovailoa played in five games last season for the Crimson Tide, completing 9 of 12 passes for 100 yards and a touchdown.

There is a lot to break down here. The Quarterback position as we know makes or breaks a program. Unfortunately, Maryland has had way too many QBs break down due to injury including Kasim Hill who was a 4 Star out of HS. It also has lacked productivity, some of that has also been because of the lack of a quality offensive line. In our Podcast last Friday, I talked about that a little for instance as it pertained to Josh Jackson last season.

First, Tagovailoa was going to be 3rd on the depth chart coming into the season which at Alabama is not a slap in the face, it does not mean you are not a quality player. That said he obviously did not think he was going to win that position battle and decided to look elsewhere. You would like to see these kids stay and battle adversity instead of taking the easy way and going to a program where you likely have little to do to earn the starting job. That said his family background would indicate he will work his tail off no matter what and is not going to take the starting job for granted. It will not be just given to him, but he has to be the favorite (more on that ahead). Give him a lot of credit, he could have transferred to a school in Florida to stay close to his brother and family, but he is going out of comfort zone and is headed to College Park. Yes, his family has a relationship with Locksley and that is important, but this will still be a big change for Tagovailoa. I think this tells you something about the kid.

He still needs a waiver to play this year but if he gets it, it will add quality and competition to the position. Tough to tell who would start but to me it is between Tags and Legendre. Yes, conventionally Jackson would the player here because of his experience but he was injured a lot last year and Legendre has just about as much time in the playbook as Legendre. Tagovailoa will not have any issue either because at least part of Alabama’s playbook has Locksley’s imprint on it going back to when Lane Kiffin came in and started adding the Spread to the offense.

Locksley built on that during the time he was there along with the West Coast elements that were in there prior.

MD’s offensive line still needs to improve, hopefully through continuity of the coaching staff this position will get better. Recruiting at the position in terms of quality of player coming out of high school has not been the primary problem in the last 4-5 years. It is a position that has had way too many OCs, position coaches and to an extent scheme changes. While there is some experience coming back, they must get better, they were woeful last year. That will of course play a significant factor into how effective a Tagovailoa or Legendre will be at the position despite their mobility.

I also have to wonder how this factor’s into Gonzaga 5 Star QB Caleb Williams decision to come to MD. If anything, it shows this program is on the rise and gaining some traction. It’s not like at Oklahoma they won’t be bringing in 4 and 5 Star QBs continually anyway so Williams would still have a chance at winning the job at some point at MD.

Mike Locksley is living up to the recruiting billing and if you’re a Terps fan, the program from a PR standpoint is a looking a lot better than it has in recent years. Remember we are not that far removed from the DJ Durkin debacle and the plethora of negative press. Now it must translate on the field. Urban Meyer recently said in an interview that time must be of the essence in College Park. While there is not immediate pressure on Locksley to win internally, Meyer has a great point. Losing begets losing and at some point, you must show results on the field, or those top recruits will stop buying in and coming to College Park. That said it is the recruiting in the trenches that will ultimately be the difference factor. In addition, Maryland plays in a helluva tough division in the Big Ten.  In Year 2 with the house preverbally cleaned out of problem guys or guys that have not bought into Locksley’s way of doing things, in 2020 it is time to start seeing incremental gains.