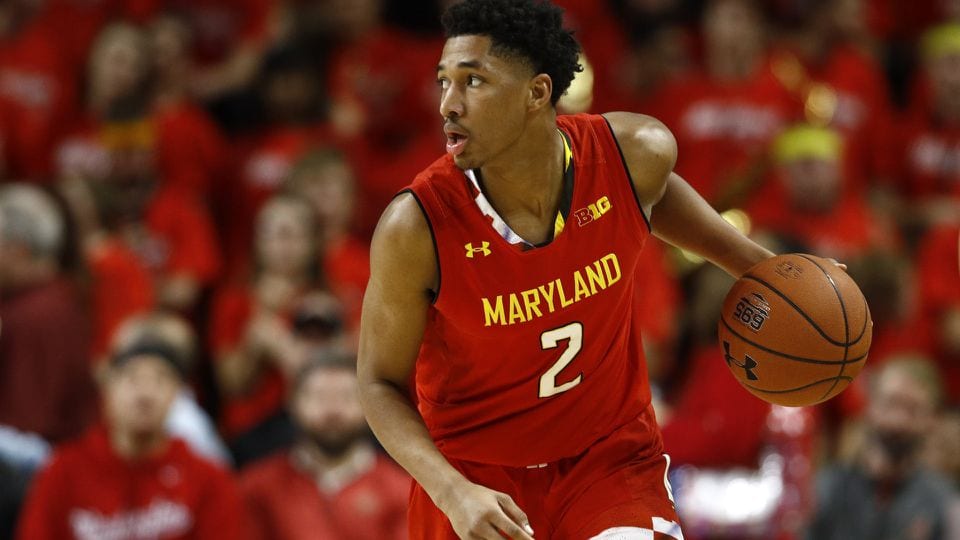 When Maryland was 6-6 and 1-5 in the Big Ten, it seemed like making the tournament would be virtually impossible. And yet, we find ourselves in late February with Maryland having a good chance to hear its name on Selection Sunday.

Joe Lunardi’s latest bracket lists Maryland as one of the last four in, giving them a #11 seed and a play-in matchup with Stanford. Meanwhile, CBS has Maryland in as a #10 seed against Cade Cunningham’s Oklahoma State. BracketMatrix.com, an aggregator of mock brackets, has the Terps as a #12 seed.

Let’s go in-depth on what you need to know about Maryland’s tournament resume and what can change in Maryland’s final four games of the regular season and beyond.

On January 10, hours after the Ravens beat the Titans in the NFL playoffs for Lamar Jackson’s first playoff win, Maryland delivered its own signature win by knocking off Illinois in Champaign without Eric Ayala. The victory snapped a three-game losing streak for the Terps and gave them a bizarre 2-5 record in B1G play with both of the wins coming in road games against ranked teams.

At the time, Illinois was #6 on Kenpom and #12 in the AP Poll. Now, the Fighting Illini are still #6 on Kenpom, have moved up to #5 in the AP Poll and #4 for the NCAA’s NET rankings, its recent replacement for the RPI. You’d be hard-pressed to find a ranking of college basketball teams this year that doesn’t think Illinois is one of the ten best teams in the country and Maryland was able to beat them without one of its regular starters. The Illini are 15-5, 11-3 in the Big Ten and of their five losses, only Maryland and Ohio State have knocked them off at home. Illinois only has one more home game for the rest of the season and it’s against Nebraska, so it’s looking very likely we’ll end the year with the Terps being one of two road teams to get a win in Champaign.

Looking at Minnesota’s schedule this year, you’d have no idea we’re in a pandemic that has led to sporting events being in either empty stadiums or with only very sparse attendance. Minnesota is 13-1 at home and 0-8 on the road, a record that’d make sense with packed arenas but feels much more puzzling in this unique season of college basketball. Minnesota remains the only team to have beaten Michigan this season and also handed defeats to Iowa and Ohio State.

Maryland is the only team that has been able to figure how to win at The Barn, delivering a complete performance in a 63-49 win on January 23. They completed a sweep of Minnesota last Sunday at Xfinity Center, but that was much less impressive given that everyone else has been able to defeat the Gophers outside of Minnesota. The Dr. Jekyll and Mr. Hyde act from the Gophers has earned them a ranking of #40 from Kenpom and #57 from the NET rankings, so there’s a gap in how to assess such a wide split between home and road performance. Regardless, if Minnesota ends the year with just one home loss, that’s an impressive win from Maryland in a venue that has managed to retain a pre-pandemic home-court advantage.

According to the NET rankings, all ten of Maryland’s losses have been in Quad 1, reflecting the strength of the Big Ten this year. Kenpom ranks Maryland #11 in their strength of schedule even with an out-of-conference slate that only included Clemson as a power conference opponent. Maryland avoided a devastating blow to its resume with its back-to-back wins against NET #145 Nebraska, but it still has to play two more conference games outside of Quad 1 where a loss could provide their first major blemish: Michigan State and at Northwestern.

That’s right, Michigan State would be a bad loss.

If you haven’t kept tabs on the Big Ten outside of Maryland, I’ll admit it sounds unbelievable but that’s the reality of this uniquely bizarre college basketball season. The Spartans are 4-9 in the Big Ten, ranked #69 on Kenpom and #92 by the NET rankings in a year that has gone poorly without Cassius Winston and Xavier Tillman. In just about every other college season, a February 28 loss to a Tom Izzo team can just be shrugged off as the Spartans playing their best basketball heading into the tournament, but this isn’t a normal college season in many aspects, including the poor play from MSU. Using the formula from the NCAA, Maryland losing to the Spartans in Xfinity Center would be regarded as a Quad 3 loss and deliver what could be a major blow to their tournament chances.

Winning at Rutgers or against Penn State at home would be solid wins but nothing to jump off the page. To do that, they’d need another game against any of Illinois, Iowa, Michigan and Ohio State and only the Big Ten tournament can offer that chance. However, there is a possibility that those schools opt out of the tournament, feeling secure about their tournament chances and wanting to avoid any additional exposure to players or staff getting coronavirus.

BYU and Gonzaga in the West Coast Conference are currently considering skipping their conference tournament and if so, it could be the first domino to fall for schools with a strong resume not needing to bother with a conference tournament. If Michigan finishes first in the Big Ten and has a #1 seed in the tournament locked up, why would a team that already had its season paused due to coronavirus want to bother playing more games than it needs to?

No team that is guaranteed an at-large berth has opted out of the conference tournament at this point and for all we know it could just be speculating, but if Gonzaga and BYU follow through, it’d be noteworthy to see who else decides the conference tournament isn’t worth the effort in a pandemic. If so, Maryland could find itself without another chance at the Big Ten’s best schools.